John Carpenter. Legendary director, writer, composer. The Thing, Escape From New York, Halloween, In the Mouth of Madness, among many other films.

Scream Factory, which seems to have cornered the market on John Carpenter Blu-rays and DVDs, recently released his made-for-TV movie Someone's Watching Me! One of his lesser-known works, this was a first-time watch for me, and I'm glad that it has been released via 2K scan for the world to see.

The lovely Lauren Hutton stars as Leigh Michaels, a television director who's moved from New York to Los Angeles to escape a particularly creepy guy. Sadly, nearly every guy she comes in contact with in LA is even more creepy, pervasive in their come-ons, and whatnot.

What's worse? The creepiest guy of them all is a major stalker, calling her constantly, leaving packages and notes at her door (or at the front desk of the worst doorman/front desk employee ever), following her around the city, and listening to and recording her via hidden recorder. Naturally, the police are useless, because she hasn't been murdered yet, aka "there's no evidence." With the help of her friend and co-worker Sophie (Adrienne Barbeau) and new boyfriend Paul (David Birney), Leigh tries to thwart the stalker. 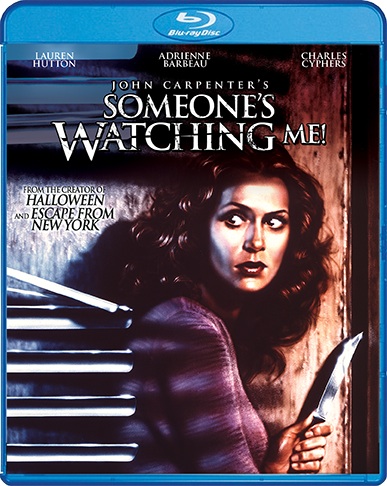 However, it proves to be maddeningly hard work -- her terrorizer is adept at hiding himself. Someone's Watching Me! is kind of an update of Rear Window for the late '70s with shades of Black Christmas (the obsessive caller).

While the pace of the film can be slow, I'd chalk that up to the era in which it was made. On the more positive side, the film has some interesting camera angles and moves at times, and Hutton is great as the woman slowly being made neurotic by a predator. The 2K scan has done wonders for the picture, and the film sounds great, too. It's a must for Carpenter completists.

When the film was shown in November 1978, there were hardly any positive portrayals (from what I hear) of gay or lesbian characters, and Someone's Watching Me! was progressive in this sense. How? The character was simply a good person who happened to be a lesbian, that's it. Barbeau discusses this in the interview in the special features.

Speaking of which, these featurettes are really enjoyable. I always look forward to watching the "Horror’s Hallowed Grounds" bonus content, in which host Sean Clark tracks down horror movie locations. It's fun to see what's changed and what the location actually looks like, or if it even exists anymore. Case in point, Clark shows us the facade of the high-rise shown in the film. It's portrayed as being in downtown LA, but it exists in Santa Monica with a really nice beach view. It was also great to see the featurette on Carpenter himself, as well as the interviews with Barbeau and Charles Cyphers, who acted in many of Carpenter's films.

Want to check it out? Watch a clip below and order from Scream Factory here.