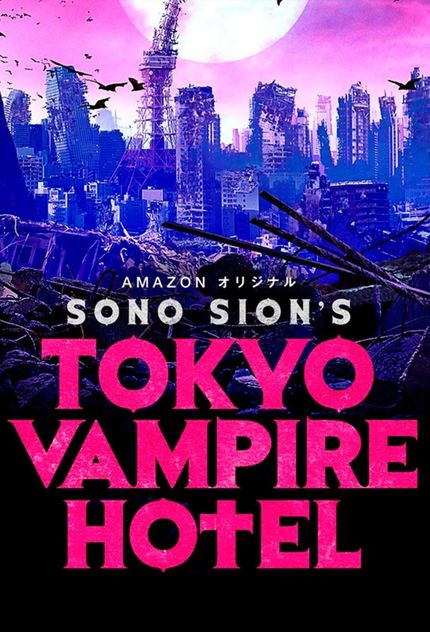 Earlier this year, Sono Sion's Tokyo Vampire Hotel was released on Amazon as a nine part series examining the conflict between rival clans of bloodsuckers vying to control the world's supply of blood. While the series did release on Amazon Prime video both in Japan and the US, the film has also been making the festival rounds in a recut version which brings the four-hundred-plus minute saga down to an almost manageable one-hundred-forty minute feature. Unfortunately, even this shorter version feels like an unfocused mess, and one of Sono's weakest features of the last decade.

We begin with an introduction to a world in which the two above-mentioned vampire clans, the Draculas and the Corvins, at at each other's necks for control over the human population. A small number of new vampires, bred of vampire blood and all born at exactly the same moment, are now coming of age and in demand by the aging old guard who wish to bolster their own numbers and select the best of the best to lead them into the future. Manami (Tomite Ami of Antiporno) is the pick of the litter, but she doesn't know it yet.

Manami is abducted and taken to the Tokyo Vampire Hotel for a very special event in which the remaining best of the human stock are being coupled up in order to provide an eternal blood supply, while the vampires plan to end the outside world. The Hotel, run by Corvin vamps Yamada (Mitsushima Shinnosuke) and his partner Elizabeth Bathory (Kagurazaka Megumi, frequent collaborator and wife of Sono), is a candy-colored, palatial estate that has been home to the clan - and its penchant for ultraviolence - for centuries.

Attempting to protect Manami from becoming the monster that the Corvins seek is powerful Dracula vamp, K (Kaho). Manami doesn't understand the changes that are happening to her, and she tends to the ultraviolence as her vampire tendencies begin to blossom, but K is insistent that she can be stronger. Together, the two of them attempt to save themselves from savagery, but not before inflicting some pretty impressive violence on those who would destroy them.

This could have been a fun film, it has a lot of elements that lend themselves well to Sono's uniquely bonkers worldview and talent for onscreen violence. Alas, it is not. I'm not sure what was lost in the translation from series to feature, but Tokyo Vampire Hotel is a nearly incomprehensible slog that jumps around its timeline in ways that are sure to confuse even his most ardent supporters. Add to that the suffocating self-indulgence of a filmmaker who has always had trouble knowing when enough is enough, and you end up with an eye-rolling experience that attempts to substitute style for substance, but succeeds with neither.

That's not to say the film doesn't have moments, but they are successfully drowned out by the incessant look-at-me smugness of the filmmaking between them. Sono's passion for onscreen violence is in abundant evidence here, with Tokyo Vampire Hotel bringing some of his most impressive action sequences since the incredible, and incredibly self-aware, Why Don't You Play In Hell?. The clashes between vampire assassins recapture the mania and intricate choreography of that masterpiece of violence, but it all feels hollow because few few of the combatants have earned any right to be cared about.

After a while, a very short while, Tokyo Vampire Hotel becomes more of an endurance test than an action horror epic. In seeing just how unfocused the feature version is, even whittled down to two hours and twenty minutes, I'm hesitant to even give the series a chance. By the climactic brawl, one that in a better movie may have had me cheering in my seat, I was too busy hoping for the sweet embrace of the end credits to give a crap what was happening, and that shouldn't be the case with the number of beheadings I was seeing onscreen.

What Tokyo Vampire Hotel feels like is a failure of restraint, but I'm not entirely sure where to point the finger. I don't know if it was Sono or the producers who decided to recut the film to feature length, but it just doesn't work. As a series, it seems as though a lot of the self-indulgence can be worked out in the service of a larger story or more complete artistic vision, ie. Twin Peaks, but as a feature it feels as though Tokyo Vampire Hotel is just attempting to cram too many moments into an already bloated running time.

In the past, Sono has proven himself not unable to create features of what would normally seem to be inflated runtime. He is, after all, the man who turned the four hour long Love Exposure into a calling card that identified him as the hottest up and coming talent out of Japan. However, that film was long by design, Tokyo Vampire Hotel is long for no good reason, and at this point it really feels as though the thing that Sono needs most in his career is a producer willing and able to just tell him, "no". Unfortunately, Tokyo Vampire Hotel, the film, has no such restraint, and as a result, it's a boring, overlong mess that just happens to have a bunch of campy violence. *yawn*

Do you feel this content is inappropriate or infringes upon your rights? Click here to report it, or see our DMCA policy.
Ami TomiteYumi AdachiAmi FukudaMegumi KagurazakaDramaHorror