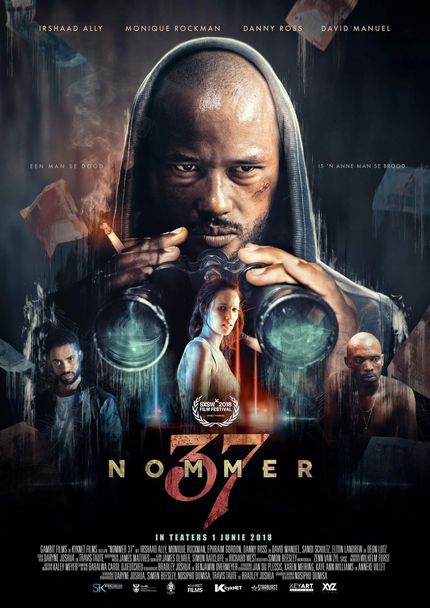 Many films either overtly or covertly play homage to other films. And it certainly takes a lot of courage to make a film that is an overt homage to a film as iconic as Rear Window. But then, South African director Nosipho Dumisa is no ordinary filmmaker, and her feature debut Number 37 is no ordinary film. Adapting her own short crime thriller is no small, and she has gifted us with a taut, exciting story, with a distinctly South African bent and adaptation of the story to her own culture and understanding, in what is one of the most exciting genre debuts in recent years.

After what should have been the perfect score for much-needed cash goes awry, Randal (Irshaad Ally) is now a parapalegic, confined to a wheelchair in the second-floor apartment he shares with his loving yet long-suffering girlfriend Pam (Monique Rockman). Now he owes money to the local gangster, and Pam’s job barely keeps them in house and home. With the kingpin breathing down his neck, and both in fear and boredom, Randal takes to watching his neighbours with newly acquired binoculars. What Randal sees, and what he plans to get his life back, could save him, but could also go wrong in the most deadly way.

After Randal witnesses the murder of a crooked cop, and knowing that there is a hidden stash of money in the dead man’s apartment, Randal sets a plan in motion with Pam and his best friend Warren (Ephram Gordon) that will both pay off his debt and possibly put head gangster Emmie in prison for good. But of course, nothing plan ever works out smoothly, and as each domino falls in the wrong direction, Randal struggles to keep himself and Pam alive.

Set in the dangerous Cape Flats neighbourhood of Cape Town, Dumisa takes full advantage of using both the internal and external spaces to express the danger, the poverty, and the particular culture that comes from an environment when any attempt to better your life is met with derision and violence. The square onto which Randal looks is both hostile to his dreams, and now, inaccesible due to his injury.

This is a world of endemic crime, where nothing comes without a price, and far from being cozy and safe in his apartment, Randal is constantly beset by problems from which he metaphorically and physically cannot escape. He cannot keep the wolves at bay, and Emmie and his thugs know this only too well, invading the space, as if to reinforce that, like his body, Randal’s personal space is alnmost entirely at the mercy of others. With each mistake or mishap in the execution of his plan, things spiral further out of control, and Randal, who before relied on his physical demeanor to get his way, must resort to more cunning and words, a skill he must learn fast in order to survive.

Director of photography Zenn van Zyl and sound designer James Matthes create this world of violence and tension, working with Dumisa’s script, to present it as the harsh and cruel place, one which is rarely quiet, where attempting to hide from danger useless, and nothing can hide the desperation felt by all. Dumisa never leaves the audience room to breathe, combining these elements with a story that leaps from crisis to crisis, mimicking Randal’s own life as it spirals out of control.

Neo-noir takes on new meaning in this film, as Dumisa changes the game on how we view crime both in the shadows and in the bright light of a cruel day. There is a great new wave of genre film emerging from South Africa, and Dumisa should be counted at the forefront. Number 37 is a racing, tense, and vividly dramatic thriller, with surprises around every dark corner.