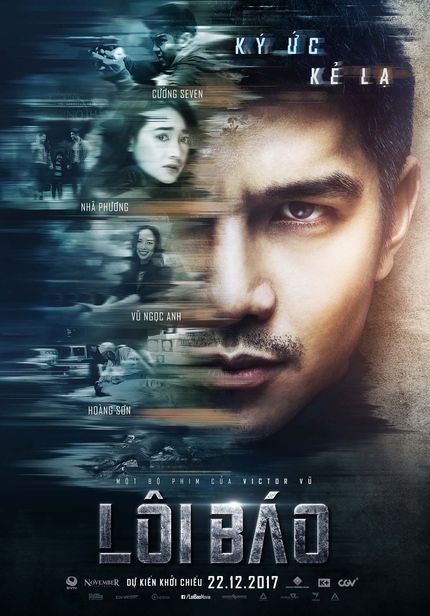 It's been several years since the Vietnamese film industry had its moment as the next big thing in martial arts action. Back in the late '00s, led by incredible performer Johnny Tri Nguyen and director Charlie Nguyen, Vietnam was beginning to make a name for itself. Films like The Rebel and Clash were making the festival rounds and even getting picked up for overseas distribution thanks to high octane, inventive action sequences and gritty, real stories that connected with audiences much in the same way that late '80s-early '90s Hong Kong martial arts cinema did. Then, around 2013 with the banning of another Johnny Tri Nguyen/Charlie Nguyen collaboration, the politically charged Cho Lon, everything just kind of died.

Cut to five years later and now we have another potential break out moment for Vietnam with Victor Vu's Lôi Báo. An action film with high concept science fiction as it backdrop, Lôi Báo stars Cuong Seven, a relative newcomer on the scene in Vietnam. He's starred in some reacent action films, but nothing that has made it out of the country so far, with this new film and a stage at Fantasia this year, he has the potential to follow in Johnny Tri Nguyen's footsteps.

Seven plays Tam, a successful graphic novelist who, while finishing up his new superhero project, discovers that his body is riddled with cancer and he only has two weeks to live. Bitter his unfair circumstances, Tam lashes out at his wife and child with regular emotional outbursts, focusing on finishing his new book so he can leave a legacy for his family. Little does he know that his family friend Uncle Ma, is not only a humble farmer, but also an experimental surgeon who has perfected a procedure that might just save Tam's life.

That's right, Uncle Ma wants to transplant Tam's head onto a fresh body to give him another chance to live a full life. Of course, procuring the body seems like it'd be a challenge, but one night while walking in the woods, Ma and Tam stumble across a freshly murdered gangster who just happens to be a perfect match. Ma performs the procedure - complete with some dodgy Frankenstein-ish make up FX - and everything is right as rain. That is, until Tam discovers that his new body has super strength and agility and just happens to know kung fu.

Tam becomes Lôi Báo, a vigilante and local superhero who just wants to help people, but it turns out that the body he received in the transplant wasn't as free of obligations as he'd thought, and someone else wants it back. From there, the chase is on.

Lôi Báo is a pretty solid little action movie with an interesting premise, but it's not without its issues. The idea of sense and muscle memory from transplanted limbs is as old as the hills, but I don't think it's been applied to a full body transplant in films yet, which makes Lôi Báo a novel exaggeration of an already successful premise. The film tempers the hardcore action sequences with plenty of zany East Asian comedy detours and melodrama for the local crowd which does soften the impact of the violence, but not to a degree that is inherently harmful to the film's ability to deliver the goods.

Obviously shot on a middling budget, the look of Lôi Báo somewhat digital-ish, which always takes me out of the moment a bit. However, the action and action choreography are solid, which does wonders for the suspension of disbelief. The shooting of the action helps as well, when Tam first discovers his powers, the camera seems as surprised as he is, helping the audience to understand that Tam is not in control of his action and that his actions are really just reactions. Jerky, unexpected camera movements translate the feeling of disconnectedness between brain and body well, and it's one of the films strong suits.

Tam's family, a breadwinning wife who runs a restaurant and a chubby son whose extra weight is played for several obvious groaners throughout the film, play good foils to his determined demeanor. There is an integral subplot involving inherited memories, a love affair, and a jealous wife that feels a bit forced, but other than that, Lôi Báo is good fun and hopefully a harbinger of a new Vietnamese action renaissance that will bring back the spirit of the films from a decade ago.

Do you feel this content is inappropriate or infringes upon your rights? Click here to report it, or see our DMCA policy.
Victor VuDoan Nhat NamAction