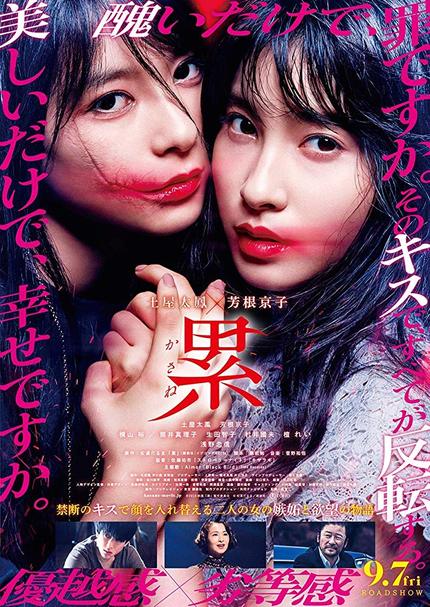 Based on the popular manga by Matsuura Dasuma, Kasane - Beauty and Fate - is a film that dissects tyranny of good looks through a horror lens.

Habuta (Asano Tadanobu) is a talent agent looking for his next big star when he comes across a pair of neophyte actresses, the hideously deformed, but incredibly talented Kasane (Yoshino Kyoko), and the beautiful but not-very-good Nina (Tsuchiya Tao). If only there were some way to combine the strengths of each to create the perfect performer...

Luckily for Habuta, Kasane has a secret. Kasane's mother was a very famous actress who recently died and left her a tube of magic lipstick that allows her to temporarily steal someone else's face by kissing them. When Kasane uses the lipstick to steal Nina's face during her audition, Habuta comes up with a plan that could make them all rich. Kasane will trade faces and names with Nina to work during the day, and Nina will reap the benefits. Simple, right? Of course, things go haywire and their bargain goes pear-shaped pretty quickly.

Director Satô Yûichi's version of Kasane is surprisingly straight faced, and in taking the subject seriously rather than going the gonzo route, his adaptation is among the more successful in recent years. The characters of Nina and Kasane are relatively well-written and Asano as their Svengali is fairly underwritten but well performed.

The most impressive aspect of Kasane are the performances of Tsuchiya and Yoshino as Nina/Kasane. Both actresses were asked to play dual roles, switching back and forth between personas frequently during the film, and they are quite convincing. Each character has their own arc, their own backstory, and their own completely distinct personality, and they each do a great job making that distinction for the audience.

The way the film explores the tyranny of not only appearances, but also expectations and family relationships is interesting and engaging. Kasane's relationship with her mother is a fascinating one which drives her to succeed just as much as her own innate desires. Nina is the kind of woman who is willing to do anything to be famous, but when she sees Kasane enjoying all of the fame using her face, she becomes incredibly jealous and their friendly bargain turns nasty.

There's nothing particularly surprising about Kasane - Beauty and Fate -, even for those unfamiliar with the manga, but it is very well executed and atmospheric. Of course, it is a manga adaptation, so there are melodramatic elements that feel a bit heightened, but then again, it is a movie about a woman who steals faces with magic lipstick, so a bit of that can certainly be tolerated. One particular deus ex machina involving a mysterious ailment suffered by Nina did elicit giggles from the audience, and I'll be honest, I did roll my eyes a bit, however, it was relatively harmless and did manage to move the plot forward even if it did weaken the overall serious tone of the film.

Kasane is a solid little gothic horror film in the vein of Neon Demon, exploring the lengths to which people will go to achieve fame. The shady deals we make when we think they'll sway the fates in our favor often seem too good to be true because they are, Kasane understands that and puts an interesting twist on an old story.