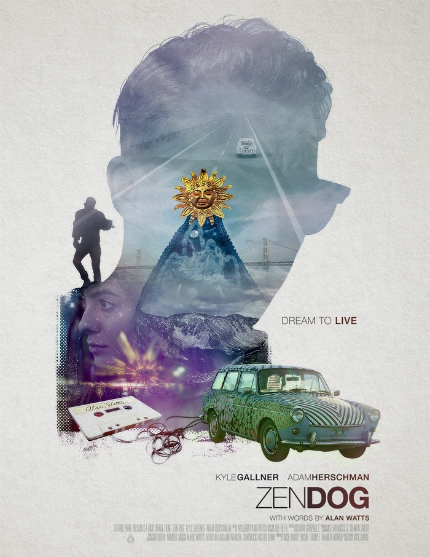 Would you like to experience complete freedom? Start by watching our exclusive clip from Zen Dog.

The film follows a young man who feels "trapped by daily routine," according to the official synopsis. But, he "experiences complete freedom by dreaming himself across the country in a psychedelic Volkswagen with the guiding words of philosopher Alan Watts."

As we noted last year, Watts was a British philosopher who helped popularize Buddhist teachings in the 1950s and 60s. Zen Dog itself is entirely fictional and appears to be more about a man's search for meaning in life -- or at least being open to new experiences that may make life more satisfying. The film was shot on location throughout the U.S.

Rick Darge wrote and directed; the cast is led by Kyle Gallner, Adam Herschman, Celia Diane and Clea Duvall. After playing the festival circuit, Zen Dog is heading to VOD and all digital platforms on Friday, June 22.

Watch our exclusive clip below, in which a young woman becomes very excited at the prospect of shopping at a thrift store and finding a new wardrobe for her new friend.

Do you feel this content is inappropriate or infringes upon your rights? Click here to report it, or see our DMCA policy.
Adam HerschmanAlan WattsCelia DianeClea DuvallKyle GallnerRick Darge