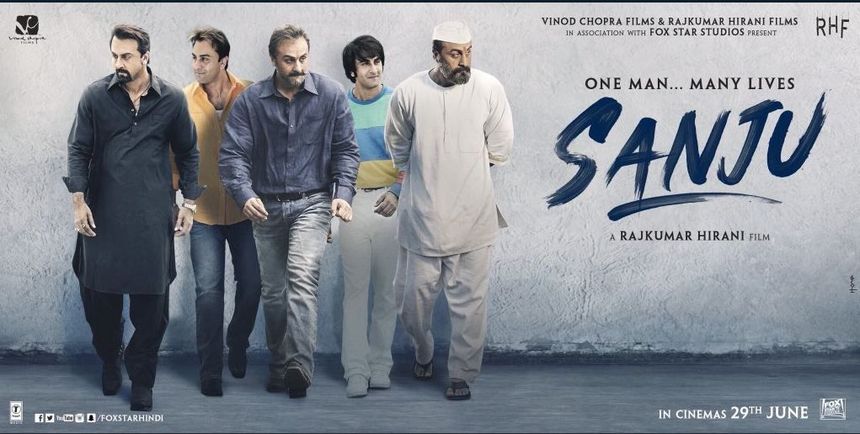 In 1993, a dozen bomb blasts rocked Bombay killing over 250 people and injuring scores of others. Over one hundred conspirators were arrested, many convicted, and some hanged in connection for this horrible tragedy, but one man's whose name came up was a surprise, Bollywood hero, Sanjay Dutt. This was just one of the many, many controversies and incidents that have made Sanjay, known as Sanju or Baba to his fans, one of Bollywood's most compelling public figures. So it stands to reason that his story would make a great film, however, now that Sanju the film is here, the question is, is it really all that great?

The son of Bollywood royalty, actress Nargis (star of Mother India) and actor Sunil Dutt (also from Mother India), Sanjay was destined for stardom from an early age. Bollywood is an industry that thrives on families in power, Sanjay was going to be in movies, there was no doubt about that, but where his life went once he was introduced to that world, few could've predicted. Drugs, drink, womanizing, fraternizing with gangsters, all of these elements combined to create a whirlwind around Sanjay Dutt that has very little comparison in the Hollywood system. Director Rajkumar Hirani tackles Baba's story in Sanju, and just like a lot of Bollywood spectacles, misses the mark by a fair margin.

Told in a kind of meta-narrative style, Sanju is loaded with fascinating anecdotes and blatant rationalization that even someone with fleeting or no knowledge of Bollywood lore would roll their eyes to the heavens to see. Sanjay is portrayed by a chameleon-like Ranbir Kapoor, himself the product of a powerful Bollywood dynasty going back to the dawn of Hindi films, and his performance is, in spite of the content, pretty impressive. He packs on some decent bulk and mimics Baba's sleepy eyes and unmistakable gait in a way that is so close to truth that it's eerie, however, it's not quite enough to save this ship whose seaworthiness is uncertain at best.

Sanju darts in and out of Sanjay's career in the movies, a wise move since the real stories lay elsewhere, but it also doesn't miss an opportunity to wring cheap applause from the greatest hits of Dutt's career. Beginning with his debut hit film, Rocky, directed by his father, Sanju paints a picture of the superstar as a bashful young man, afraid to take a puff from a cigarette in front of his father for fear of disappointing him. He's soon moved past that bashfulness upon meeting with a friend named Zubin Mistry (Jim Sarbh, Padmavaat), who introduces him to the hard stuff, changing Dutt from a shy kid to a raging monster in a matter of weeks.

Dutt's dependence on drugs plays a huge part in the film. He's in an out of rehab facilities, uses drugs to mask the pain of his mother's death, and really any other minor emotional inconvenience he finds himself up against. However, the way the film handles his addiction is a microcosm of the problem it has handling every other controversy in Dutt's life, it pawns the responsibility off on Mistry, showing Dutt as a naive little boy who got caught up in something he doesn't understand.

Therein lies the greatest problem with Sanju, what could've been a no-holds-barred exploration of a life lived in controversy with highs and lows worthy of any Bollywood melodrama, instead we get a feature length rationalization of a man who has made mistakes, but seems unwilling to accept his responsibility for their consequences. At this point it is worth noting that Sanju was written and directed by Rajkumar Hirani, whose 2003 film Munna Bhai M.B.B.S. resurrected Dutt's career after his association with the Bombay Blasts killed it for a decade.

Hirani and Dutt are friends, and Sanju, as The Wire critic Tanul Thakur put it, feels like "an expensive gift from a powerful filmmaker to his actor friend". Hirani is a great filmmaker, don't get me wrong, and the Munna Bhai films, along with his more recent record-breaking blockbusters Three Idiots and PK, are major bright spots in the spotty output of the new century's Bollywood. However, Sanju is like the story every woman tells her friends about the boyfriend they don't like, "you just don't know him like I know him", which not only makes it wholly unreliable, but also eye-rolling for those who've witnessed these acts up close and personal.

In India it would be almost impossible to separate the review of the film from the preconceived notions of the subject. Sanjay Dutt is a well known actor, and his misadventures have provided fodder for tabloids for decades. However, even when you attempt to separate the man from the myth and create a kind of corrective like this that pretends to shine a light on the truth, it has to be convincing, and Sanju is not.

The film points fingers at everything and everyone but Dutt for his actions. The drugs? That was Zubin Mistry. The guns? He was just afraid for his life. The women? Well, boys will be boys. Oh, and there was that one time he saved his best friend, played with aplomb by Vicky Kaushal (Raman Raghav 2.0) from a harlot by sleeping with her to prove she was loose. Even someone with no familiarity would see this story would see these deflections.

Structurally, the film is a mess. Sanju whips back and forth in Dutt's life as a way of connecting with a wraparound piece about a biography he wants written to clear the air about his life. Part of the problem with that is the film does its potential audience outside of Bollywood fans any favors by refusing to signal with clarity exactly when each vignette takes place. Fans familiar with Dutt's career would be fine as Hirani and Kapoor seem to mark the time using Sanjay's hair style, Farrah Fawcett here, a fashionable mullet there, a bleach blonde rat tail somewhere else, but simply throwing the year on screen would've been an easy way to help some of us track the stories. I did okay with it, but even with my better-than-average awareness of the styles of the time, I found myself getting lost once or twice.

The cast of the film, Kapoor and his co-stars Sarbh, Kaushal, and Sonam Kapoor as an early flame, Paresh Rawal doing good work as Sunil Dutt, Manisha Koirala as Nargis, Anushka Sharma in a ridiculous wig as a potential biographer Winnie Dias, are all pretty solid, though only a few do good enough work to be called out. Paresh Rawal has been in the trenches doing character actor work for years and gets a meaty role here, and Vicky Kashal as Dutt's best friend Kamlesh shows decent range. However, in the end it's not enough for a film to be acted well and have good production value, you have to feel it. With Sanju, Hirani is desperately trying to manipulate his audience into accepting his view of his friend, and it just doesn't work.

While there are too many warts in Sanjay Dutt's story to call Sanju a hagiography, I think it could easily be referred to as a hazy-ography for the way it muddies the waters with regards to the truth. I didn't expect it to be a revelation, I knew going in that there would be come rationalization seeing as how this is an authorized biopic made by one of the subject's best friends. What I didn't expect was the way the film, and its subject by extension, refuses to assign responsibility to Dutt in any meaningful way.

It's all summed up in a final song that plays over the credits in which the real life Dutt sings and dances along side Kapoor to a song that basically blames the press for every problem he's ever had in his life, it's this kind of complicity that rips away any kind of legitimacy Sanju could've claimed. Is it entertaining? Sure, at times. But in this case there are far too many instances in which the character's motivations or rationalizations are flimsy at best to mark it as a success. This version of Sanjay Dutt is a Sanjay Don't.

Do you feel this content is inappropriate or infringes upon your rights? Click here to report it, or see our DMCA policy.
Rajkumar HiraniAbhijat JoshiRanbir KapoorSonam KapoorParesh RawalVicky KaushalBiographyDrama