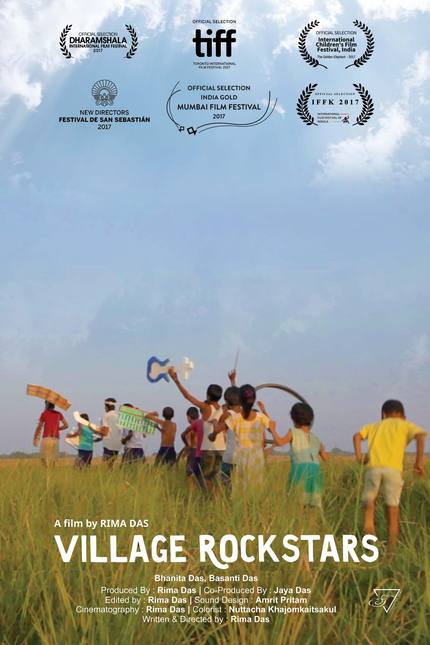 Written, directed, and shot by young filmmaker Rima Das, Village Rockstars is a beautiful expression of passion and hope based in a small village in rural Assam in northeast India. The Western perspective of what it means to be a woman in rural areas on the other side of the world is startlingly uncivilized, but leave it to Rima Das to show that girls just wanna have fun, no matter what language they speak.

Dhunu is a 10-year-old girl in the village where daily life is often filled with rambunctious play and lessons learned on by doing. One night, when she watches a group of young boys pantomime as a rock band playing cardboard and Styrofoam instruments along with popular music, she gets the far out idea that this is what she wants to be. Dhunu wants to be a rock star. This is not the normal path for young girls, but Dhunu's mother encourages her dreams, even when it knocks against the expectations of everyone around her.

First thing's first: Dhunu needs a guitar. When the family takes a trip into the city to go shopping they make a pit stop when they see a guitar hanging in a shop to ask the price. The thousands of rupees quoted to them may as well be a million dollars, but while that puts a damper on instant gratification, it's nowhere near enough to deter Dhunu, who puts her nose to the grindstone and begins to save up her own money by hiring herself out to the neighbors by doing chores.

When she's not working for the village to sock away money for her guitar, Dhunu runs around the town roughhousing and horse-playing the the boys, another social faux pas. She wants to play-fight, climb trees, and generally finds more in common with her male friends than the more demure ladies of the village. Though she tries hard to be herself, when she gets her first period, she's suddenly scooped up by her elders and ushered into womanhood in a ritualistic way that reminds us that her fate is not entirely her own.

Dhunu is one tough cookie, though, and not one to be easily dissuaded from her goal. She, her mother, and the ladies of the village are really the ones who make the wheels of life turn around here, and she knows it. Dhunu and her mother manage to balance their dreams and desires with the needs of the family, even when it means tightening their belts, there is a common understanding that everything is temporary, and better times await as long as you're willing to work for them.

Bhanita Das as Dhunu is a firecracker on screen. Like the rest of the cast, she is a non-professional actor, and her real personality shows through in her ebullient performance. Rima Das' film is a bit ramshackle when it comes to technical aspects, but the director - who also served as main cinematographer - approaches her subjects with the kind of affection and love that a rare few films manage. There's no need to embellish here, this isn't poverty porn, we aren't meant to pity them, we are meant to empathize with their joy. To be honest, it's hard not to with a cast and production like this.

The atmosphere of Village Rockstars is so real that it almost feels like a documentary. Rim Das' direction is the opposite of fussy, allowing the characters and their actions to breathe on screen in a way that speaks to her affection for the subject, which the audience then adopts. This is one hell of a charming little film that is bound to put a smile on the faces of everyone who watches. Even in their most challenging moments of poverty, Dhunu and her friends never think they are anything less than blessed, and so are we that we get to share this experience with them.