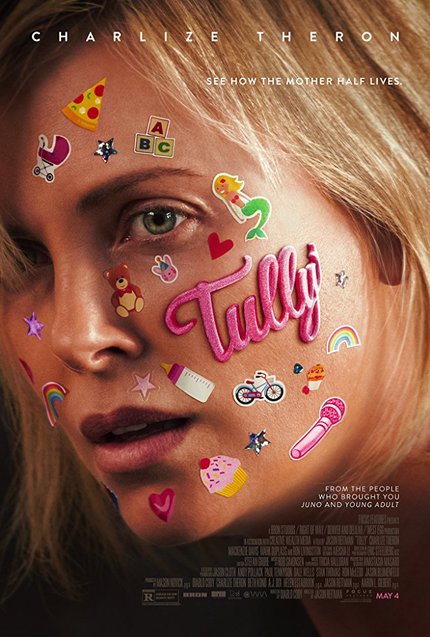 Or: Postpartum Depression: The Movie.

Up front, I feel as though I should offer a bit of disclosure: I know this one.

No, I did not have anything to do with the making of the film, its development, or marketing.  Nor have I ever suffered from postpartum depression; nor was I even familiar with the premise of this film prior to seeing it.  (The re-teaming of director Jason Reitman, writer Diablo Cody and actress Charlize Theron being cautious reason enough to check it out).

My familiarity comes from having lived closely to postpartum depression for a spell or two or four.  That, coupled with the fact that my wife, for several years, made birth work her profession, with a strong focus on the postpartum side of things.

For those unfamiliar with this condition, as I was not so long ago, postpartum depression is part of a spectrum of mood disorders triggered by pregnancy and childbirth, ranging from depression to anxiety and, at the extreme, to psychosis. Postpartum depression is very common, though it’s not the kind of thing that people tend to make movies about.

But, maybe there should be a few more.  Tully is a good start, getting a lot of details and minutiae correct, even as it stumbles around in search of a reason for being “cinema”.  If filmgoers of any sophistication can agree on anything, it’s that filmmakers and studios should not be afraid to make movies about real people with recognizable issues and true problems.

At the same time, audiences perpetually demand something new.  Have Reitman/Cody/Theron stumbled into virgin territory?  Perhaps, if only in terms of raw topicality.  Yet, there’s the vibe that they don’t quite trust their topic to compel multiplex crowds as needed.  Apparently, merely being a film that embodies the dreary headspace of postpartum depression isn’t enough.  Though admittedly, too many folks can get that at home.

The few broad turns and sore-thumb filmic reveals of the otherwise deliberately staid Tully are big asks of Reitman, whose struggle with the material is felt in these handful of moments, if nowhere else.  That’s to say nothing of the two or three completely out-there mermaid hallucination shots.  It’s true that hallucinations are on the list of advanced examples of PPD symptoms, and are therefore technically warranted in this movie.  But their insertions feel more weirdly calculated, more creativity iffy, than boldly in step. 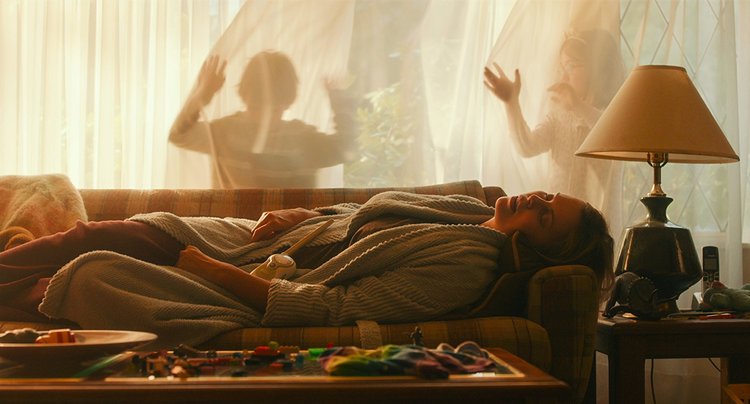 As for Theron and the cast, they perform their tired best.  Theron is suburban wife Marlo, mega-pregnant when we meet her, and mother of two other young children, at least one of whom has more special needs than is realized.  Both before and after their baby daughter is born, Mom is stressed out and Dad (Ron Livingston, his husband character withering in interactive video gaming) is checked out.

Once the baby arrived, Marlo’s snarky wealthy brother (Mark Duplass) offers to pay for a night nanny, an exclusively nocturnal professional caretaker of newborns who’s presence allows parents to get much-needed rest.  The nanny, Tully (Mackenzie Davis), is a free spirited and attractive twenty-something with whom Marlo quickly bonds.

After initially being unsure, and maybe feeling a little threatened by this new attractive expert presence in her home, Marlo and Tully are soon hanging out, talking life, relationships, and whatnot.  Will Tully help Marlo out of her dark funk, or will she prove only to be further disruption?

Theron, previously the strong link in the Reitman/Cody project Young Adult, continues on that path.  Theron goes for broke with her “new mom” body (and to think, just last year we were watching her multilingual seduction act in Atomic Blonde.  Her whooping up on baddies with a deadly firehose in a short skirt seems an entirely different plane of reality) and PPD-plagued character, making her not the easiest person to spend time with.  But when she loses it with her son’s school principal, we are with her.  When she then absentmindedly bangs her baby’s pumpkin seat on the way out the door, causing the principal to startle with concern, Marlo curtly snaps, “She’s fine.”.  it’s a pure veteran parent moment.  (And for the record, Marlo’s not wrong).

By comparison, most of the other actors have noticeably less to do.  Ron Livingston sells his role as the token blank slate husband, a directionless loaf of white bread closed off in his first-person shooters.  It’s never occurred to him that raising and dealing with his kids is also his job.  (The movie pokes nicely at his ignorance, prompting a healthy wake-up call for so many of us dads).

It’s Mackenzie Davis who has the only other true heavy lifting.  Davis sells Tully just as Tully must sell her skill set: confident beyond her years, secure in her femininity, and an intuitive doer.  The initial artifice that may be sensed about her is, however, intentional for the character.  That Tully turns out to be more than a manic pixie dream nanny is practically inconsequential.  In short, for viewers looking for a relatable depiction of PPD, Tully is as much a disruption to Tully as she is to Marlo.  She works until she doesn’t, or she doesn’t until she does.

When bundles of joy don’t deliver as advertised, life in the subsequent  months can be anything but joyful.  That Tully attempts to go there, if only by immersing viewers into Marlo’s condition, is enough to recommend this one to interested parties- regardless of how well one may already know it.

Do you feel this content is inappropriate or infringes upon your rights? Click here to report it, or see our DMCA policy.
Charlize TheronDiablo CodyJason ReitmanMackenzie DavisTully