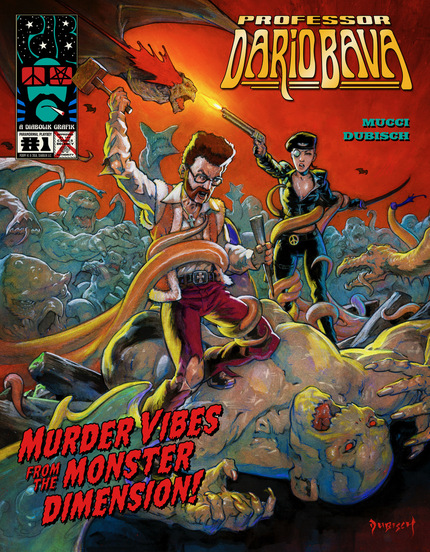 Who exactly is the world-renowned Dario Bava: Paranormal Playboy, you ask? Only the most notorious Vatican-exorcist-turned-monster-hunter ever, who, along with Future Girl time traveling super-hippie from a heavy tomorrow, and Major Bitch, far out freedom fighting yeti-slayer, keep us all safe from the most hideous beings from the netherworld!

The first book will feature three complete tales, including "Blood Puppets of the Fiendish Manitou", in which Father Bava conducts his last and deadliest exorcism for the Vatican, "The Future Blows, Dude!" in which Future Chick discovers her powers in a world of ravenous horrors, and "The Bastard Birthright of Major Bitch" in which an American army brat runs away in post-war Europe to fight for justice against men and monsters. All three characters join forces in the thrilling climax to battle a vampire warlock coven in the Paris catacombs.

And if that wasn't enough to get you on board, the publication will also include a variant cover by Italian horror maestro Emanuele Taglietti!

This project looks all-around awesome, so be sure to head over to the Indiegogo page and check out all the perks that come with your support.

Check out a short project teaser below.

Do you feel this content is inappropriate or infringes upon your rights? Click here to report it, or see our DMCA policy.
ComicCrowdfund thisDario BavaEmanuele TagliettiGraphic NovelPhil Mucci