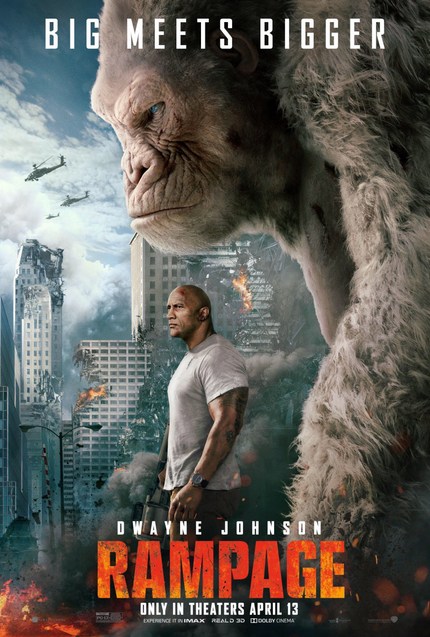 Rampage just might be the most entertaining video game adaptation ever made.

It might have something to do with the fact that there is so little meat on the bones of the original property that writers Ryan Engle, Carlton Cuse and Ryan J. Condal, and Adam Sztykiel were able to go completely hog wild with the concept in ways that other films can’t. There’s almost no way to stray from the original arcade classic that could possibly upset the hardcore nostalgiacs, unless of course they were to somehow strip the chaos and destruction that formed the game’s entire raison d'être, however, that is decidedly not the case here. Rampage is one of the biggest, loudest, explodiest, most violent, and cartoonishly gory films of the last decade, and it’s never dull for a second.

Davis Okoye (Dwayne Johnson) is a primatologist at the San Diego Zoo who has a special bond with a very intelligent albino ape named George. When George suddenly begins to grow and exhibit abnormal aggression following the explosion of a research satellite, it draws the attention of the satellite’s owners, the evil Energyne, and a mysterious government agent (Jeffrey Dean Morgan as the swagger-y Agent Russell) whose job it is to squeeze dangerous toothpaste back into the tube by any means necessary.

Before long, one monster turns out to be three, and things get even further out of hand. The siblings at the head of Energyne make some questionable decisions that exacerbate the situation and Russell overestimates his grasp on the situation, leaving it to Davis and his guns – both literal and figurative – to stop the rampage before it’s too late.

Dwayne Johnson has proven himself to be one of Hollywood’s most charismatic performers over the last decade, and even here, essentially playing second fiddle to a trio of CG behemoths, he’s absolutely magnetic on screen. Displaying an almost impossible combination of physical perfection, effortless charm, and an incredibly believable and sweet demeanor toward his best friend, George the 50 foot ape, Johnson is impossible not to like, even as he plays much the same character as always.

One of the greatest things about Rampage, a film that is by turns incredibly silly and surprisingly violent – and never not loud – is the way it embraces exactly what the audience expects it to be. The video game, for those unfamiliar, was a simple contest between three monsters, a giant King Kong-like ape (George), an uncharacteristically humongous werewolf (Ralph), and a not-quite-Godzilla (Lizzie) to determine who could cause the most damage to a city. That was it. No back story, apart from the fact, jettisoned from the film, that it was tainted Scum Soda that turned them from human to monster. It was just a pure release for the Jolt Cola generation of the ‘80s who needed a way to vent their frustration with the world.

Rampage embraces that chaos and delivers on the destruction in ways that both completely live up to the legacy of the game and go beyond in terms of the amount of violence delivered. Buildings are smashed, people are eaten (a staple of the game), and there are too many dismemberments to count, all the while, never quite reaching a level that would necessitate an R-rating, in spite of the number of limbs flying around. All of the goriest stuff is on screen, but cleverly hidden in out of focus foregrounds, just enough to sate those looking for a thrill, but never quite enough to make the audience squeamish. It’s actually a masterful balancing act that the director, Brad Peyton, has achieved with the film.

Peyton honed his talent for chaos and balancing the monstrous charisma of his leading man with the pathos that comes from dealing with disaster in a series of films starring Johnson that have gotten better and better as time has gone on. From the utterly forgettable Journey 2: The Mysterious Island, to the entertaining San Andreas, this director-actor duo has each other figured out in ways that really contribute to a satisfying experience.

If Dwayne Johnson isn’t your thing (are you even human?), there’s his tense will-they-or-won’t-they bromance with Jeffrey Dean Morgan to keep the fire going. Morgan’s performance is a masterpiece of scenery chewing as he accomplishes the not-at-all simple task of stealing scenes from Johnson on more than one occasion. The kind of character who spouts pithy lines like, “when science shits the bed, I’m the one they call to change the sheets,” with a smile on his face, Morgan’s Russell is a definite winner in a film that already has a lot going for it.

However, this film isn’t really about Johnson and Morgan (as fun as they are to watch), it’s about watching a giant ape, wolf, and lizard tear a city to shreds, and on that score it delivers in spades. Rampage is the action film of the season so far, big fun that acknowledges and embraces its own goofy roots and delivers some of the most impressive monster-made chaos in years (sorry, Pacific Rim Uprising, you got served).

Do you feel this content is inappropriate or infringes upon your rights? Click here to report it, or see our DMCA policy.
Dwayne JohnsonJeffrey Dean MorganMalin AkermanNaomie Harris