The film is a fable that encourages reflection. 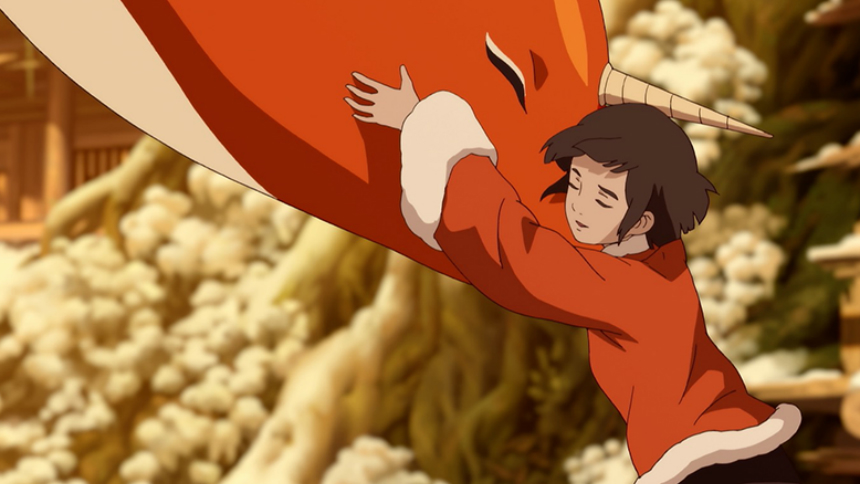 Hailed as the Chinese answer to the fantastical works of beloved Japanese animation house, Studio Ghibli, the independently produced feature Big Fish & Begonia channels ancient wisdom into a dazzling animated canvas. Enhancing the overall production value of the film, hand-drawn characters blend with 3D backgrounds to create a seamlessly rendered world that is at once magical and harsh, but always governed by the notion that every actions has consequences.

Chun, the central figure in directors Liang Xuan and Zhang Ohun’s pioneering box-office hit, is a young girl, whose existence is somewhere in between that of human and a God, and lives in a gorgeous land that exists underneath ours. Our oceans are their skies. Everyone who lives here is a powerful being that controls a specific part of nature in our world. Some rule over the tide, others handcraft our weather, and Chun is in charge of begonias; however, her powers grant her superhuman qualities. As a rite of passage, all teenagers in this land must transform into red dolphins and travel upwards to the human world to experience it once in their lives and witness the effects of what they control.

The splendor of the sequences in which a group of red dolphins flies away into the watery ceiling is breathtaking, as are many instances throughout the picture that highlight the perfectly balance marriage of handcraft and digitally manufactured spaces. During her trip, Chun meets a brave boy, who happens to have a young sister. In the form of a sea creature Chun is unable to communicate with him, but when she needs help to escape a dangerous net, the boy risks and eventually loses his life to save hers. Back home in the fantastical kingdom, there is also a boy who fancies her, Qiu, a lonely kid, we assume around her age, that spends every minute of the day hoping to make Chun’s life easier.

Upon her return after nearly being captured by the fishing vessel, she makes it her mission to bring the human boy back from the death. She exchanges half her lifespan so that the souls keeper, a curious shape-shifter, can bring back the young man back. He returns in the form of a tiny dolphin, which Chun must nurture until he’s grown enough to swim upwards and back into his human body. Their endearing relationship, one that for the most part appears to be that of a pet and an owner, takes on epic proportions as Chun reckons with the fact that saving this innocent and heroic youngster might force to endanger those she loves. The equilibrium between both worlds is at risk because of her actions.

The layered and intricate plot oscillates from focusing on the love triangle that includes Qiu, the pushback Chun faces from her mother and her wise grandfather, and a confrontation with an entity that uses rats to collect lost souls. All of which is underscored by voiceover from an elderly Chun, a choice that helps predict the outcome of the adventure in terms of whether she will live a long life or not. Proverb-like dialogue is sprinkled in hefty quantities to remind us that nothing one receives comes without a price, and that for every request there is always payment taken, voluntarily or otherwise. An air of mysticism coats the sumptuous animation whose color palette often concentrates on red tones.

Watching Big Fish & Begonia, one inevitably gets a sense of the spirituality that surrounds the narrative with sacrifice and personal responsibly standing at the top of the list of messages the movie discusses through evocative imagery. Near the end, as all of the parties involved come crashing and demanding answers from Chun, we are left wishing for a just a few more details on certain subplots, but overall is an admirable achievement, not only because it’s sure to put Chinese 2D animation on the map, but because it binds all its intellectually challenging ideas into a cohesive fantasy. There is a moral depth and introspection in the protagonist rarely seen in products aimed at the younger crowd. Grappling with the dilemma of saving a life while risking many others is a heavy burden for the heroine, even more so when her own survival is simultaneously on the line.

Comparisons to Miyazaki’s Spirited Away will abound, but even in the same construct of a boy and a girl, one from an otherworldly land and the other a mortal, looking to return home, the makers of Big Fish & Begonia decisively infuse their project with distinctively Chinese symbols, wardrobe, and philosophies to turn it into a film with its own mechanics and aesthetic charm. Floating in an ocean of visual beauty is the tale’s thoughtful core: selfless love. This recurrent concept marks the way it all unfolds, and it’s impressively profound to witness. Yes, it is a stunning wonder brimming with awe-inspiring moments, but also, like some of the best animated works ever made, a fable that encourages reflection.