In 2018 Tribeca’s overall shorts program, as in past years, has been both vast and satisfying. Perhaps more impressively, the genre shorts are particularly strong, not just token entries included to appease certain audience segments. These, then, are some of the stand-out titles in horror, science fiction, and fantasy at TFF this year. 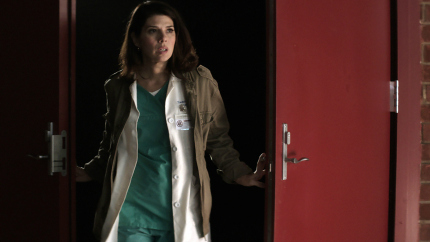 If your first impression of Jocelyn Stamat’s Laboratory Conditions concerns its slickness, don’t worry, you’ll soon get past that. The impressive production values, the star power, the no-wrong-notes VFX/CGI—well, all of that (kudos to producer Joe Russell, by the way) is in service to the deeply-felt themes in Terry Rossio's script. Indeed, Marissa Tomei and Minnie Driver show what veteran actors can deliver in the short form: an economy of character development, and the ability to personify abstract concepts (soulful humanism and soulless empiricism respectively) while also remaining intensely real. The rest of the cast excels as well, which is one reason, in addition to its pacing and structure, Laboratory Conditions is so ridiculously engaging. The story itself, as is often the case with outstanding shorts, reinvents its central conflict and narrative focus every few minutes, but always in ways that flow easily. I won’t say too much more, except that this is a near-perfect blending of mad science, supernatural allegory, and suspense thriller. See it and marvel.

I’ll try not to be one of the countless genre fans who remark that Bad Peter feels a lot like an episode of Black Mirror, but that’s only because I feel it’s more rewarding than most of those small screen offerings. It keeps its focus tight, not expanding in some grand fashion that implodes under its own weight or raises any questions about the underlying world-building. And because Zach Strauss’s film spotlights a single end user who’s basically not interacting with tech that’s beyond what we already have, the result is instant relatedness. That kind of present-tense approach to sci-fi heightens the immediacy—not to mention makes things waaaaay scarier. In fact, if certain moral and legal constraints were removed from Amazon Alexa or Google Home we’d already see nightmare scenarios like this playing out in the real world, and actually I’m not convinced that won’t still happen.

Two Balloons is a light-hearted fantasy about lemur aviators. If that sounds dangerously whimsical, okay, there’s no denying that Mark C. Smith’s film runs the risk of being characterized (or even dismissed) that way. Fortunately, the wow-factor far outweighs any over-the-top cuteness to which one may object. There’s the Miyazaki-like cloudscape where everything takes place, the brilliant stop-motion animation reminiscent of early Aardman, and some moments (especially at the end) of pure cinema that are nothing less than breathtaking.

In Let Them Die Like Lovers a fairly straightforward body-swap or mind-migration premise is carried to extraordinary emotional lengths in Jesse Atlass’s thoughtful, meticulous thriller. That’s not to say that it’s an overly cerebral exercise; on the contrary, the visceral shocks are both effective and well-timed. And with superb production design, strong acting, and terrific editing and cinematography, this short film is exceedingly engaging even before it builds to its powerful conclusion. It’s not unusual, of course, for shorts to function as the micro-narrative version of a story that eventually that gets remade as a feature; in this case, the material is so rich and full of possibilities that one can imagine it expanded into an entire TV series. 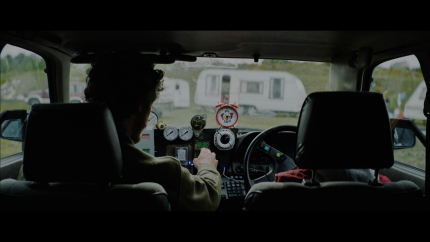 More of a short about genre than a genre short per se, Time Traveller recalls Son of Rambow, Ratcatcher, and countless fan-made versions of Hollywood blockbusters (plus the docs made about them). Undeniably sentimental, but affecting nonetheless—you can see its gut punches from a distance but they land anyway—Time Traveller is an affirmation of childhood imagination that, against all odds, manages to feel fresh. Yes, ultimately it’s a variation on a theme about the socially redemptive quality of the movies that’s at least as old as Sullivan's Travels. But I think we need those once in a while, and Steve Kenny’s tribute to Back to the Future fills that need very nicely. (If you want to sample the kind of pure Spielbergian rush that Time Traveller references, check out Earthly Encounters. It’s assured and full of winning dialogue and performances, but for me doesn’t capture the dark wonder of the other shorts recommended here.)