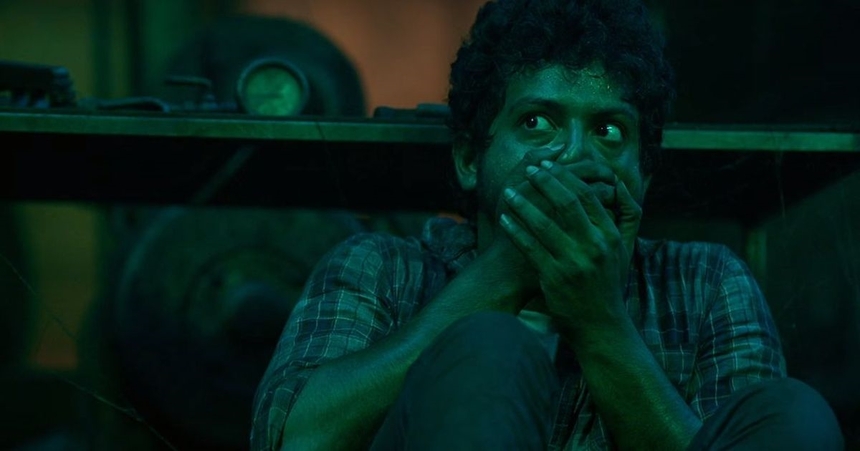 Mercury, the latest film from Tamil wunderkind director, Karthik Subbaraj, is a bold experiment in alternative storytelling. This film, touted as a “silent thriller” though really more of a ‘dialogue-free’ one, is the most high profile project of its kind in years. Told completely without spoken, written (apart from one very brief SMS), or implied dialogue, Mercury is a wild departure for a filmmaker who’s made such a huge impression over the last seven years with films packed to the brim with clever writing and astute social commentary. The end result is a technical marvel, one of the best shot Tamil films in recent memory, with a surprisingly adept sound design that compensates for the lack of speech in creative ways; however, Mercury isn’t without its faults, and those are certainly worth discussing as well.

Five twenty-something former classmates meet for a reunion near their old stomping grounds in Kodaikanal, the site of a real life infamous 2001 chemical tragedy – here disguised as Corporate Earth -- that led to death and disease for thousands of its residents and chemical factory workers.

As a result of this tragedy and the effects of the chemicals on the locals, the friends are all deaf and mute, a fact that leads the entire film to play out entirely without dialogue. The fact that the characters cannot hear or speak doesn’t mean they can’t make sounds, it just means that they must communicate by other means, mostly very agitated signing.

When the old pals decide to go for a late night drive in the country near the plant that caused the disaster so many years ago, they stumble upon what appears to be a fresh corpse in the woods. Frantic and unable to decide what to do, they dump the body and cover it with brush. When they are attempting to regroup from their shared trauma, the lone woman among the group suddenly disappears, presumably snatched, and the four remaining friends head off to find and rescue her, leading them into the belly of the abandoned Corporate Earth chemical plant, where nothing creepy could possibly happen.

Before long, the hunters become the hunted as a killer begins picking them off one by one, hidden among the black and green shadows of the factory. This all happens in the first thirty minutes, the last ninety or so follows the dwindling crew as they seek a way to save themselves from the vengeful one who wants to see them all dead.

On a technical level, Mercury is a very impressive piece. As I mentioned above, the cinematography by legendary Tamil lensman S. Tirru (Aalavandhan, Hey Ram, 24) is top notch. The film is absolutely drenched in shadows, which could’ve been a nightmare, but Tirru manages to wring an incredible amount of ambient atmosphere from the surroundings, leading to a number of memorable sequences and very impressive visuals. The sound design is equally impressive, as Kunal Rajan turns this dialogue free outing into a tense experience in which each creak, whimper, and strong breeze is pregnant with a kind of tension that most films have trouble eliciting even with pages of dialogue.

The film does fall short a bit in the execution of the narrative at times, however, which is a bit disappointing for me as a huge fan of Subbaraj, but not enough to strike it down as a failure. The thriller elements of the film – the stalking, the chasing, the tension, etc… - are exceptionally well executed, however, Mercury does fall prey to a trend in Indian genre cinema of attempting tag a social message to every film, whether it’s needed or not.

In the case of Mercury, the film is a social thriller that attempts to pay tribute to those harmed and killed at the hands of industrial accidents. A noble cause, for sure, and one that certainly deserves attention in the form of a film tribute or expose, but the elements of this film that hearken to these tragedies feels a bit tacked on and less integral to the plot. The film’s final reel devolves a bit as the story takes a hard left into over-sentimentalizing, which saps a bit of the momentum from what was until that point a very taut little thriller.

All these issues being what they are, Mercury remains a victory in my book, an ambitious thriller that dares to stake its claim in a way that is smartly written and technically marvelous for the most part. I’ll take a pretty good high-concept gamble over a well-acted but boring middle of the road potboiler any day of the week. Mercury is certainly worth seeking out and if nothing else it certainly proves that Tamil cinema’s future is in good hands with Subbaraj, and I’ll continue to see everything he does.