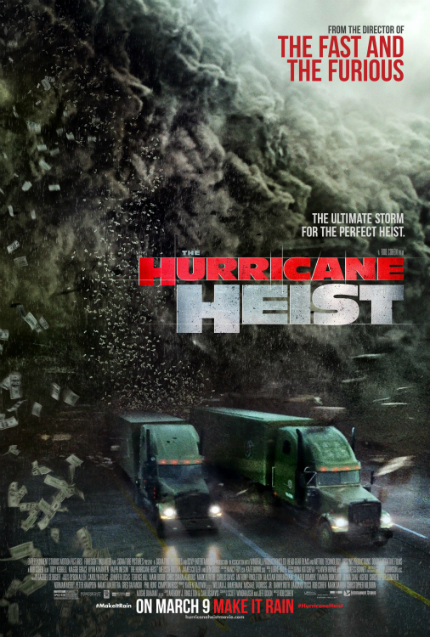 Ah, the 1980s, when big concepts ruled the box office!

Patently ridiculous (often), The Hurricane Heist is riotously entertaining (always). The title itself fits neatly into the 'big-concept' ideal that became popular during the 1980s and continued into the 1990s: it's Die Hard in a storm! It's Twister with a criminal twist! It's Cliffhanger in the American South!

Yet it's also a film directed by Rob Cohen, who has been making big-concept ideas into blockbusters (and would-be blockbusters) for 30 years, with titles like DragonHeart, Daylight and The Fast and the Furious to his credit. Or blame, I suppose, if you are not a fan of films that aim for the widest possible audience and are obsessed with the dynamic symphony of crash-bang action sequences.

A steady diet of such films would deafen me, I'm sure, especially at the volume at which The Hurricane Heist thundered at my local multiplex. As a longtime fan of action movies, however, especially action movies that eschew explicit bloodshed and excessive profanity in favor of fluid, propulsive visual sequences, I was hooked from the moment the first hurricane appeared on screen.

The story begins during Hurricane Andrew in 1992, establishing the bond between brothers Breeze (?!) and Casey, and their intimate disgust / fascination with monsterous storms. Younger brother Casey grows up into a meteorologist (Toby Kebbell), while his older brother Breeze (Ryan Kwanten) has become bitter and disinterested in life.

A hurricane is approaching their small town. Casey forecasts that it will be bigger than any they have seen since childhood, but Breeze, now a mechanic, can't even be bothered to think about evacuating, having slumped into booze and melancholy malaise.

The town is also home to a high-security federal facility where old currency is brought to be shredded, which is how we meet Casey (Maggie Grace), a high-spirited treasury agent who thinks nothing of driving an 18-wheeler through private property so as to deliver her truckload of old cash ahead of the storm. Her driving partner, Perkins (Ralph Ineson), is far less conscientious as a treasury agent, but Casey has something to prove, as we learn after they arrive at the federal facility.

The specifics of the plot matter less than the driving force that Cohen brings as director. It also helps that the screenplay, credited to Jeff Dixon and Scott Windhauser (story by Carlos Davis and Anthony Fingleton), features a plethora of unexpected twists, as well as a good collection of pithy one-liners, and delivered by a very solid cast. Beyond the sterling leading players, who display enjoyable chemistry together while also believably developing their individual characters, there's also Ben Cross, who brings authenticity to a role that might otherwise become a joke. And that's in addition to Ineson, who is terrific.

The film is paced like a jackrabbit out of hell without ever losing comprehension, which is a rare thing to see in a modern action extravaganza. Credit to Cohen and film editor Niven Howie for the headlong momentum, as well as director of photography Shelly Johnson (Captain America: The First Avenger). Lorne Balfe's musical score nicely complements and underscores the proceedings.

Nothing here is revolutionary or extraordinary, but it's a pleasure to sit back and not be insulted by the characters or their actions. Or feel like you have to turn off your mind to be entertained. The Hurricane Heist made me laugh out loud (frequently) at the sheer audacity of the action, but I never doubted the sincerity of the filmmakers.

The film is now playing at theaters throughout the United States, probably in the smallest auditorium in the multiplex. Go, but only if you like loud action movies.

Do you feel this content is inappropriate or infringes upon your rights? Click here to report it, or see our DMCA policy.
Maggie GraceRalph InesonRob CohenRyan KwantenToby Kebbell