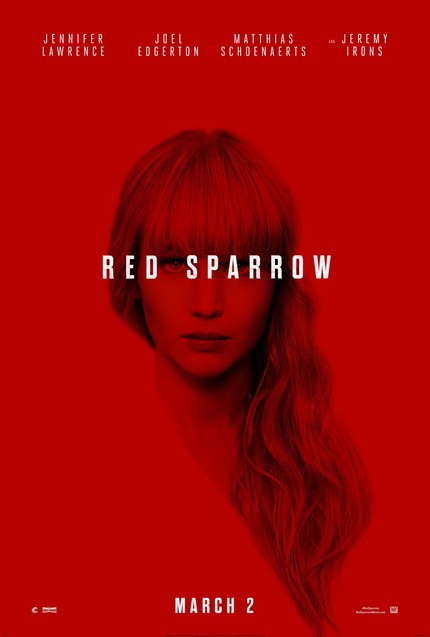 Jennifer Lawrence has made great strides in attempting to transform from the box office bombshell behind the success of films like The Hunger Games series, and the odd critical success of Silver Linings Playbook or Joy, into a legitimate, respected thespian, and with her most recent leading role in her then-paramour, Darren Aronofsky's mother!, it looked like it was finally her time. However, mother! was less than universally loved, and while the critics who favored it were outspoken, the ones who did not were just as adamant in their opinions, but even louder, making the film less of a coming out party than an odd blip in the filmography of an already conflicted performer looking to break free from the constraints of Hollywood's well-defined image of her.

Enter: Red Sparrow. This film is a crazy amalgam of cinematic influences, none quite strong enough to push it beyond the realm of the mildly enjoyable. Based on a novel by Jason Matthews, Red Sparrow tells the story of the prima ballerina of the Bolshoi Ballet, Dominika Egorova (Lawrence), who is injured in the line of duty and forced into service by her uncle Vanya (*sigh*) as an agent of the Russian secret services. Vanya, played by Bullhead star Matthias Schoenarts, is a slime ball from the start, manipulating Dominika's desire to care for her ailing mother - previously managed by her affiliation with the Bolshoi - to convince her that only he can keep them both above water and only if his niece will to the unthinkable, submit herself to the "whore school" that is Sparrow training.

Dominika is pressed into service to approach and weaken an American agent whose contact with a mole inside the Russian intelligence services has made her uncle's life difficult, but as one might expect in a film like this, she catches feelings for her prey, played with icy determination by Joel Edgerton, and things get complicated quickly. The games of cat and mouse get increasingly violent and disturbing as both Dominika and Edgerton's Nash are repeatedly tortured - often nude - in an effort to prove themselves to their respective masters.

Double, triple, and quadruple crosses follow, leaving the audience a bit dizzy, but never far from guessing the truth of the matter, and mostly serving simply to bloat the film to a staggering two hour and twenty minute run time. Red Sparrow is intermittently exhilarating, but could easily trade thirty to forty minutes of exposition for a tighter, pacier experience. Thankfully, Lawrence and Edgerton hold the film together nicely, but it's hard not to think about all of the scenes that could've been left out.

Jennifer Lawrence has said in interviews that Red Sparrow was her way of countering the wicked violation of her privacy that led to every schmoe on the internet seeing her naked, and she definitely takes control of her own body in the film. In fact, the entire film is pretty much all about what a woman can do when given control over her own sexuality. However, it's hard not to be a little confused - even when I completely understand that it's not my or anyone else's place - at her choice of vessel for that redemption. Here, she chooses to expose herself in a way that is somehow powerful and yet flippant, but sitll leads to the ultimate doom of those who might objectify her in the context of the film, but viewing the picture as a whole, it still seems flimsier than I believe she intended. I cannot, and would have no interest in making those decisions for her, but this film is such a flaccidly semi-entertaining piece of fluff that it seems like a waste of a statement.

All that being said, apart from the frequently exorbitant run time, Red Sparrow is definitely an entertaining mish-mash of '60s Cold War thriller and early '80s Bond-style espionage action film. It chooses not to tread the same ground as Charlize Theron's Atomic Blonde by making the heroine a talented ass-kicker, instead making Lawrence's talent that of seduction, and that does definitely give it a particular sleazy charm that the former film hinted at, but didn't commit to. In a way, Red Sparrow is all about a unique power that women claim over men in utilizing their sexuality to the ruination of their foes, but that's not very forward thinking, and I have to admit, even feels more than a little regressive in this day and age.

Red Sparrow has its fair share of strengths, though, and is definitely a film that was made to please audiences, even outside of its naughtier exploitation influences. A surprisingly deep cast, bolstered by the performers mentioned above along with Jeremy Irons as a Russian military hardass, is impossible to ignore and lends a certain weight to an otherwise ridiculous premise. Then there is perhaps the most impressive technical feat of an almost slavishly Hermann-esque score by James Newton Howard, which had me envisioning the greatest works of Hitchcock while watching the work of a B-list De Palma clone, a masterpiece of diversion if nothing else.

I never thought I'd see the day when an A-list movie star headlined a film that was equal parts Cold War thriller, Hitchcockian suspense, and sleazy Salon Kitty styled exploitation, but here we are. Honestly, if I were Tinto Brass right now, I'd be waiting by my mailbox for the royalty check to arrive, because several of the scenes in the "whore school" of the first act are straight out of his Nazi brothel opus from 1976, but I digress. Jennifer Lawrence puts on a fake Russian accent that had me distracted enough to overlook some of the film's more ridiculous moments and game to go along for the ride. Red Sparrow is a shamelessly entertaining film with more than enough nude torture to appeal to the B-movie crowd and a cast that will draw in cinephiles in spite of themselves. Of all my gripes, the main one is still the indulgent run time, but I've gotta say, I stayed until the end and don't regret it one bit.

Do you feel this content is inappropriate or infringes upon your rights? Click here to report it, or see our DMCA policy.
Francis LawrenceJennifer LawrenceJoel Edgerton