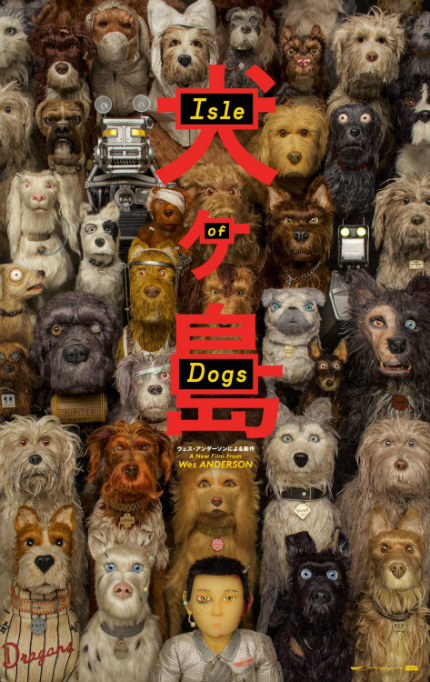 Already hotly anticipated by the director's fiercly loyal fans ever since the film's trailer was dropped by Fox Searchlight last year, Wes Anderson's brilliant animated feature Isle of Dogs does not disappoint and proves to be quite another little idiosyncratic gem in the style of Fantastic Mr. Fox.

Only this time, it all comes with a Japanese twist, unlike its British-themed predecessor. In true Wes Anderson style, the writer-director breaks up his story like a book, beginning with a prologue that quite literally paints a scene of ancient Japan. Mimicking the style of classic Japanese art and stories, he draws out before us a timeless feud: A clan of cat-loving warlords called the Kobayashi wage war on all dogs. Except just as the clan are about to erradicate all dogs from Megasaki City, a young boy rises up and slays their chieftan, instigating a golden era where domesticated dogs become the beloved companions of households across Japan.

Fast forward to a future that is rather playfully and arbitrarily placed 20 years from now, and we find that the feline-loving fiends have risen once again, and a newly installed Mayor Kobayashi has set about stoking the flames of anti-canine sentiment. The plan he proposes: That all dogs be banished from Megasaki onto a small island where trash is dumped just off the Japanese archipelago, beginning with the bodyguard-dog of his own adopted, 12-year-old ward Atari, as a gesture of how serious the family takes this matter.

Thus begins a very classic hero's journey, as the young boy embarks on a mission to be reunited with his long-lost dog. Except this hero's journey is rather wonderfully punctuated by a symphony of snuffle and sneezes throughout, because almost all the mangey cast suffer from a darkly comic dog flu and snout fever.

And it's a sign of just how much this Bihas already caught the imagination of Anderson's fans, that they're already strategically putting up "Missing" signs for Atari's dog Spot around Berlin. Before the film has even premiered! (That, or somebody in the film's team has had a real masterstroke of novel, low-budget marketing gimmicks).

In some ways, though, fans should be warned that this film isn't quite as quick-fire and polished a gem as some of Anderson's previous films. It does also suffer of feeling midlly familiar, using as it does the same ploy that Fantastic Mr. Fox uses of putting A-list actors' instantly recogniseable voices into mesmerisingly alien cartoon worlds. Nevertheless, this effect is undeniably one that remains an absolute delight to any cinematic pallette worth its own salt.

So get ready to be treated to some equisite defamiliarisation of Bryan Cranston's gruff, Breaking Bad tones, as he plays a stray dog who cannot be tamed, but seems destined to come good as Atari quests to find his dog. Elsewhere in Isle of Dog's alpha pack also returns familiar past collaborators and talents such as Bill Murray, Jeff Goldblum and Bob Balaban. Plus there's Scarlett Johansson as Wes Anderson's textbook enigmatic and aloof female heartthrob, and also a cameo voice-over appearance for Frances McDormand, continuing her recent bad-ass run of form.

Without a shadow of a doubt, this stellar cast's ability to rise to the challenge of Anderson's very distinctive style of delivery absolutely makes this movie - and Isle of Dogs becomes something of an ultimate bedtime reading experience, which you didn't know you wanted so badly as an adult until now. Stitched into a kooky, Americanised Japanese score, this film's voice-over has all of Anderson's impeccable, off-beat comic timing, but it feels even more high-tempo and intense than Fantastic Mr. Fox.

In fact, this film contains lots of well-natured and mild-humoured American nods to Japanese culture and manga. What is perhaps most beautiful is the kind of pseudo-Japanese visual effect that Isle of Dogs achieves. On top of all of Anderson's ever-present and gorgeous muted pallette of colours, this animation has a sort of feng-shui symmetry and neatness to it. The director's very distinctive style now takes on elements of an abstract style, like classic Japanese art. And the film is also built with very 2D backgrounds, from which the film's 3D puppets rise out towards you. So it seems like the whole film is one beautifully balanced, carefully rooted modern Japanese tapestry.

Yet this comedy always manages to carefully steer on the side of being respectfully culturally titallated rather than being disrespectful. For example, in a world of clunky 3D, plastic-looking puppets, the TV screens play actual cartoons, like an admiring nod to the manga that often informs the humour and references of this film. In fact, in what seems like a very unusual and brave decision by the film's auteur-director, much of the film is even delivered in Japanese, and is often only teasingly half-translated - as the film itself puts it - by foreign students on work placements or by automated machinery.

This gives Isle of Dogs a fascinating effect on a variety of levels. First and foremost, it makes the movie seem almost much more Japanese than it actually is (being deeply rooted as it is in a sort of high-brow American sensibiltiy). But beyond that, as the dogs are almost the only characters who speak English, you are deeply caught up in their perspective. At times, it's even almost as if you have a dog-like perception of humans, as every now and then we are thrown fake Japanese words like "doggu" or "sittu" to recreate the kinds of human demands that dogs learn to respond to.

Kudos to the film's animators too, because sometimes they really capture something of the behaviour of dogs. But they always humanise it, in a way that really taps into the more infantine sides of our natures. As well as creating wonderfully sudden shifts between high- and low-brow humour, this linguistic barrier and skilful humanisation actually allows Isle of Dogs to align you with an outsider's perspective in quite a powerful way. So as well as being a healthy 101 minutes of absolute nerdy funny, at its heart, Isle of Dogs is actually a very quick-witted and incredibly current response to what happens to certain sections of society when deceitful leaders are allowed to manipulate public fears to achieve power.

That's right, Wes Anderson just came for Trump, via Japan -- and you have to see it.

Review originally published in slightly different form during the Berlinale in February 2018. The film will open in select theaters in the U.S. on Friday, March 23, and then expand in the coming weeks.

Do you feel this content is inappropriate or infringes upon your rights? Click here to report it, or see our DMCA policy.
Bill MurrayBob BalabanBryan CranstonJeff GoldblumScarlett JohanssonWes Anderson

More about Isle of Dogs