Review: 7 DAYS IN ENTEBBE, Sympathy for the Terrorist(s)

Daniel Brühl, Rosamund Pike and Eddie Marsan star in José Padilha's dramatization of a hijacking and the rescue attempt that followed.

Recognizable actors always help a film to secure financing and may increase the interest of potential audiences, but they often work against the aims of a film based on real-life events.

That may be especially true for films that endeavor to dramatize events that took place more than 40 years ago, as in 7 Days in Entebbe, which is based on a hijacking and subsequent rescue attempt in the summer of 1976. Directed by José Padilha, known for action thrillers like Elite Squad (2007) and RoboCop (2014), as well as the startling Bus 174 (2002), the film effectively recreates the insane rush of the hijacking and the building tension that surely must have swamped the terrorists and their victims as the real-life drama played out over the next few days.

The quick pacing by Padilha and his editor Daniel Rezende -- they're worked together on nearly all of Padilha's films -- adds to the urgency. The cinematography by Lula Carvalho, another frequent Padilha collaborator, fleshes out the varying locales with subtle, easily-identifiable lighting, so that we always know instantly where the action is unfolding.

The film begins with the hijacking of an Air France jetliner by terrorists. Originating in Tel Aviv, Israel, and bound for Paris, France, about two-thirds of the passengers are Europeans, while the remaining 90 or so are Israelis. Screenwriter Gregory Burke, who scripted Yann Demange's extraordinary '71, then divides the action between the terrorists, who end up landing the plane in Entebbe, Uganda, and government officials in Israel.

In doing so, the actions and convictions of two terrorists, a hostage, a defense minister, a prime minister, and a soldier are showcased, and therein lay the complexities of the piece. Frankly, that's also where the presence of recognizable actors starts to fudge things. 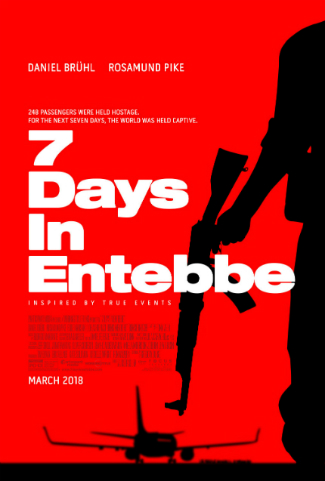 Daniel Brühl, Rosamund Pike and Eddie Marsan are all fine actors, and I've enjoyed their rich and varied performances in the past very much. They are similarly fine here, portraying Wilfried Bose (Brühl), Brigitte Kuhlmann (Pike) and Shimon Peres (Marsan), respectively. They bring as much nuance and subtlety as possible to their roles, eschewing any possible inclination toward scene-chewing or showboating.

Pike's German accent as Kuhlmann and Marsan's particular accent as Peres (born in Poland, grew up speaking Hebrew, Yiddish and Russian) are not issues as much as the film's focus on Bose and Kuhlmann to represent the terrorists. There were two other hijackers, both Palestinian, and after the flight landed in Entebbe, they were joined by three comrades, as well a a complement of Ugandan soldiers.

Bose and Kuhlmann were a couple, however, or had been a romantic couple in the past, and their story is perhaps more appealing because, over the seven days, Bose apparently became a bit sympathetic toward the Israeli hostages, while Kuhlmann was resolute in her hostility, so that all makes for a positive/negative charge to the quieter moments. Of course, they are also both pale-faced Europeans.

Yet the focus on those two, especially Bose, engenders greater sympathy for the European terrorist(s). As much as anything, that's because Brühl is a terrific actor; we also keep waiting for Pike to recant a bit, just because the actress is well-established in so many roles as an empathetic personality. Perhaps to balance this, several quiet moments are also shared between a soft-spoken French flight engineer (Denis Ménochet) and a Palestinian terrorist, who provides fervent, if stock, reasoning for his actions. Overall, though, it's easy enough to conclude that the terrorists were well-meaning revolutionaries who only wanted justice for the Palestinians.

Lior Ashkenazi, another fine actor, portrays Prime Minister Yitzhak Rabin, but the emphasis (and the energy) inevitably shifts to Eddie Marsan as Peres. In part, that's because Defense Minister Peres is depicted as a more dynamic, take-charge, 'let's kill all the terrorists now' kind of leader. Again, perhaps to balance this, the "Israeli half" of the film alternates between political discussions and domestic scenes, featuring a young soldier (Ben Schnetzer) and his dancer girlfriend.

The hijacking and subsequent military mission was quickly dramatized on American television twice, first in Victory at Entebbe (broadcast five months later in December 1976) and then in Raid on Entebbe (broadcast in January 1977). I saw both and don't recall much beyond the basic outline of what happened. Those were followed by Menahem Golan's Operation Thunderbolt (1977).

A solid dramatic thriller, 7 Days in Entebbe serves as another good outline of the events that occurred, making me curious about the historical record, as well as somewhat uncomfortable by its portrayal of the terrorists. Maybe that was the idea.

Do you feel this content is inappropriate or infringes upon your rights? Click here to report it, or see our DMCA policy.
daniel brühlEddie MarsanJose PadilhaRosamund Pike