Blu-ray Review: THE FLORIDA PROJECT, Another Exuberant Celebration of Life on the Fringe From Sean Baker 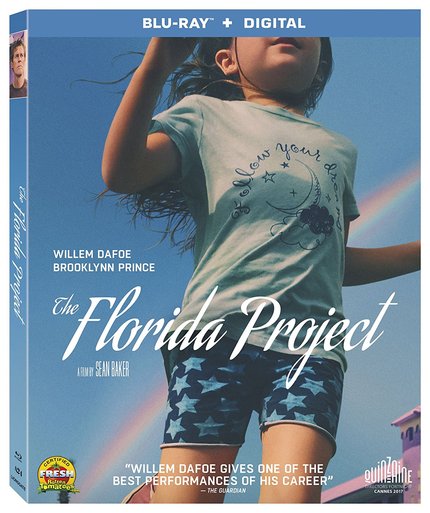 Two years ago his film Tangerine, famously shot entirely on iPhones, was a runaway critical success. That film, the story of a transgendered prostitute hunting down her philandering boyfriend, was a hugely entertaining and impossibly kinetic tale that captured my imagination and the imaginations of almost everyone who saw it. It was a huge surprise to me, to be honest, as the film's logline sounded like it was going to be trying too hard, but Baker manages to balance the serious nature of this woman's concerns with her unashamedly outrageous behavior in a remarkable way.

When it was announced that Baker was returning with The Florida Project, a film about life just below the poverty line adjacent to the happiest place on earth, I knew I had to see it and the film did not let me down. The Florida Project is the story of a down-on-her luck young mom named Halley (Bria Vinaite). Halley can't find a job to save her life and lives with her daughter Mooney (Brooklynn Prince) at a discount motel just outside of Disney World in Florida. The motel is managed by Bobby (Willem Dafoe), and the film delicately observes the lives of its residents with special attention paid to the young children, Mooney and her friends.

As with Tangerine, Baker uses mostly untrained non-actors to portray people on the skid and just have them run with the materials they were given. The result is stunning work of authenticity, brimming with humor, heartache and much humanism.

But the film's about the kids being kids, always curious, always screaming and yelling, running across the various balconies and up and down the stairs of colorful motels, all named similar to Disney attractions - Future Land, Alibaba, Magic Castle and so on, and the nearby grassy swamp full of empty houses. It's beautifully captured verité style in mostly 35mm by Mexican DP Alexis Zabe (Silent Light, Post Tenebras Lux).

The performances by three kids – Brooklynn Prince, Valeria Cotto (Jancey) and Christopher Rivera (Scooty) are so natural and so untamed, it makes you wonder how on earth Baker ever managed to bring them out. Firebrand newcomer Vinaite is also great, easily topping Riley Keough's portrayal of white trash skank in American Honey (which will make a handsome double feature as Flipside of American Dream). But the range these kids have, especially Prince who seems to convey range of emotions on cue, is astounding.

I tend to agree with Dustin on this one. The Florida Project is a masterpiece of empathy for characters who not only aren't often offered much empathy in films, but are very rarely portrayed at all. They are crass, uneducated, and frequently vulgar, but they are doing the best they can, even when it isn't much. The Florida Project loves them all, it embraces their faults, it acknowledges them, it doesn't forgive them their mistakes, but it concentrates on the human toll of poverty and desperation. It's a superb film that is well worth your time.

Lionsgate's presentation of A24's The Florida Project on Blu-ray is excellent. Unlike the guerrilla production of Tangerine, The Florida Project was shot on 35mm film (for the most part), and the transfer to Blu-ray is exceptional. Colors are vibrant, detail is exceptional, and the sound is well replicated. With a film like this it is important that the audience feels like they are there, and this disc does the trick.

The Florida Project comes to home video with a few very interesting and often entertaining extras. First up is a making-of documentary that mixes behind-the-scenes production footage with a few on the spot interviews that gives the viewer a good sense of what it was like while the film was in production. It's wonderful to see just how much of the film is improvised and how amazing the kids are in their roles. There is also nearly an hour of interview footage with Baker, Vinaite, Prince, and Dafoe that is fascinating. Baker’s interview is particularly interesting as he reveals that his goal was to make a modern Little Rascals type film about kids being kids in the midst of poverty. Great stuff. There are also several minutes of bloopers and outtakes that viewers will enjoy.

I wish I'd seen The Florida Project last year, it would have easily made my top ten, but you get the joy of discovering it now, and I envy you that. Highly recommended.


Dustin Chang contributed to this story.

More about The Florida Project