Sundance 2018 Review: WE THE ANIMALS Marks the Poetic Battle Cry of Childhood 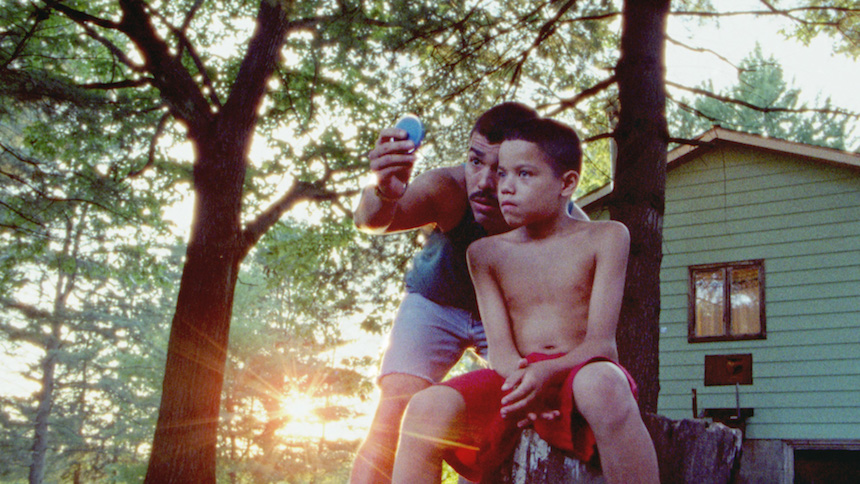 If there is a sensation I most recall from childhood it would be breathing. Or lack of breath, or the worry that I was breathing the wrong way -- was my belly supposed to go in on an inhale and out on an exhale? The breath sung into my veins, into my blood, into my anxiety, my concern for the world and what it was, and what I was. Was I wrong? Was I not supposed to be here... and if so, how could I combat that? By expressing myself, by creating something, anything: writing, drawing, making radio dramas with all the sound effects and music hummed by my pursed nine-year old lips.

At it's most visceral and true, Jeremiah Zagar's narrative feature debut, We the Animals, is about the breath, blood and life of a child artist who is beginning to hone their passion in order to understand, survive, yes, but then also to heal, to grow, and to share. It is also about brotherly love, family bonds and strife and a more familiar American life than is often depicted on screen. In its tenderness and audacity to illustrate the struggle for expression in childhood, Zagar takes his intuition as a documentarian and finds further inspiration in the likes of poetic realist staples Ken Loach, Charles Burnett and Lynne Ramsay.

It is sometime in the early 1990s. It is a sleepy summer in upstate New York, the rustbelt, wrapped by lush green and burdened by the ghosts of factories dead and dying. Jonah (Evan Rosado) is the youngest of three boys. His Ma (a career best Sheila Vand) works at a bottle factory. His Paps (an electric Raúl Castillo) is a nightwatchman at a derelict one. Originally from the Puerto Rican Bronx, Jonah's family has come to the country for a life that should prove easier, healthier, safer. Jonah and his older brothers, Manny (Isaiah Kristian) and Joel (Josiah Gabriel), take to the summer days like a pack of wolf cubs, eager and ambitious in their aimlessness. The boys, shirtless, move in unison, bobbing and weaving across the woods and fields, gathering together under their covers at night chanting in unison, flashlights ablaze: "Body heat! Body heat! body heat!"

This brotherly love is a shield for the fallout the boys experience from the fights Ma and Paps have; the violence Paps inflicts on Ma. The boys are old enough to take notice and know what is wrong, but what to do? Jonah finds his savior in his inner life, one brimming with a vibrant imagination that translates to a fury of writing and provocative, anxiety drawings. This holy book of his is sacred and secret; he keeps it tucked up between the mattress and bedspring. With startling perils facing Jonah from all sides -- his mother's depression, Manny and Joel's increasing aggressive and rebellous behavior, his own first crush on a boy -- his art (not that he would know to call it that) is his strength.

Zagar's respect for and absolute trust in his young actors leads to a film that brims with lyrical mystery; that feeling in childhood that everything is so big and so far and yet right there, startling as to how close it is. The list of current directors who excel at cinematic tales about children -- real kids and not some movie construct -- feels fairly short. I would cite Celine Sciamma (Tomboy), Gabrielle Demeestere (Yosemite), Bas Devos (Violet) and certainly now Zagar. Rosado, Gabriel and Kristian, crawling over nearly every frame of this film, are allowed to beat true and steadfast to their mercurial existence as children. Working very much as a unit for most of the film, the boys' love for each other begins to splinter as the strain of familial strife weighs heavier on the trio. While the presence of the parents is undeniable, this is very much a film from Jonah's perspective. Still, Zagar, Vand and Castillo strike that perfect balance for how the adult world bleeds in. Ma and Paps never appear as mythical or otherworldly adults. They are flesh and blood. As real as can be through the eyes of Jonah.

In one of the film's absolute best scenes, the boys are witness to Ma and Paps making out -- nearly going at it really -- as the brothers hide in the shower. Ma tricks Paps to go and get her pair of boots from the closet. When he's gone, she jumps into the shower with her sons and when Paps comes back they all give him a big fright. This spills out into the hall with everyone laughing and rolling, until Paps is on top of Ma, in a warm embrace on the living room rug. The boys stand over them. They are laughing and slapping their father on his bare back. The slaps get harder and harder until the are pummeling him. Paps continues to lie there, over Ma, under his sons beating him. he is silent, with eyes closed.

The genius here is in Zagar's insistence to not frame this scene, nor any scene in the film, in a judgmental or antagonistic way. Paps physically abuses Ma, he scars his sons. He knows this. He knows these are not good things. And through that cycle of hate and violence, there is still love, a startling and confusing love that is only becoming more complicated to Jonah as he draws and writes and dreams of drowning with Dustin, the older boy down on the farm... their only hope to survive a kiss to share one breath.
It excites me that something so universal in its story can find a rich cinematic language to thrive in. Marvelous, introspective and barrel-chested, We the Animals is exactly the kind of film that should straddle mainstream and arthouse appeal in a way that will delight and challenge audiences. Like Burnett, Loach and Ramsay's socially minded work, Zagar gently and proudly reminds us the incredible tapestry of families that breathe life across America.
Tweet Post Submit

Do you feel this content is inappropriate or infringes upon your rights? Click here to report it, or see our DMCA policy.
Evan RosadoIsaiah Kristianjeremiah zagarJosiah GabrielRaúl CastilloSheila VandSundance 2018we the animals