Review: Anurag Kashyap's MUKKABAAZ, The Tale Of A Boxer Fighting For What's Right 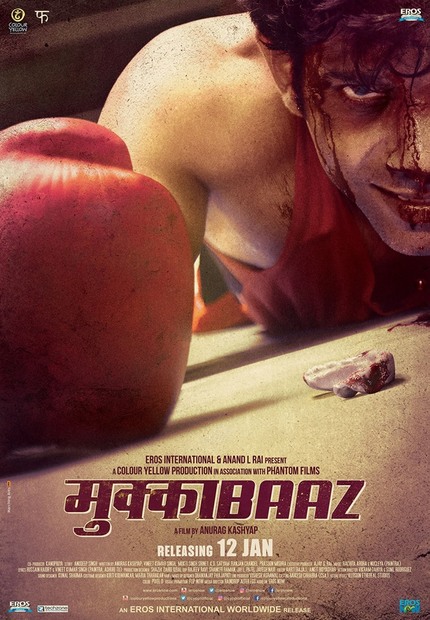 These are tense times in India, and that tension has been increasingly reflected in their popular art even when the art isn't necessarily about the sources or direct effects of conflict. The biggest source of enmity and division in the nation, as in many nations, has to do with religion and religious fundamentalism invading the public space. While the population of India is perhaps one of the most diverse populations in the world in terms of faith-based traditions, the two that appear to be the most contentious are the majority Hindu population and the major minority Muslim population, but that's only part of the story.

In recent years the rise of the Baratiya Janata Party (BJP), led by hardline Hindu populist and Prime Minister Narendra Modi, has taken to legislating in the name of Hindu tradition which has led to a lot of strife in parts of the country where people from different backgrounds used to live peacefully. In addition to causing friction between the religious communities, it has had the side effect of reinforcing antiquated traditions in many areas of the country like the dreaded and medieval caste system which segregates even observant Hindus into categories from which they are unable to escape.

Most of the major metropoles in India have done a decent job of largely erasing the discrimination that comes with the caste system (at least at the middle-class and above levels, generations of discrimination still spell doom for the hundreds of thousands that live in poverty in urban areas). However, travel a few miles outside of the big cities and it's often like stepping into a time machine.

In Anurag Kashyap's (Gangs of Wasseypur, Psycho Raman) new film Mukkabaaz, all of these ancient political and religious distinctions come into play in a modern day tale of star-crossed lovers crossed with a tried and true underdog story involving a young boxer and his true love. This is new territory for Kashyap, whose work over the last decade has positioned him as one of India's most prominent filmmakers on the international scene, and he's largely built that reputation based upon his work making gritty crime films. While Mukkabaaz continues largely in that tradition of violence, it makes a change my placing at its core this love story, something that Kashyap tried with questionable success a few years back in the box office disaster, Bombay Velvet.

Mukkabaaz, titled The Brawler in English, begins with a bang, a group of rural boxers get into a fight during which Shravan makes a mistake that ends up costing him more than he expected. Lower-caste Shravan trains at the local Uttar Pradesh gym and the local boxing commission is headed by a Brahmin (upper-caste) politician named Bhagwan Das (Jimmy Shergill). Always nearby is Bhagwan Das's niece, a mute but very capable young woman named Sunaina who draws little attention and isn't thought much of in general, but who has captured Shravan's heart, nonetheless.

When Shravan crosses Bhagwan Das, the commissioner cuts him off from not only competing in the local boxing matches - which he would clearly dominate as everyone in the area can clearly see - but also takes away the one thing he loves as much as boxing, Sunaina. Boxing is all Shravan knows, and the way everything is politicized in this film's India - and the real one, for the most part - he sees Bhagwan Das's decision as more or less a death sentence, but more than a boxer, Shravan is a fighter and he spends the next several months starting from scratch to find a way to regain the things Bhagwan Das has taken from him.

In Mukkabaaz, Shravan has the cards stacked against him in a remarkably unfair way. He is poor, uneducated, of lower-caste, and has no real world experience outside of boxing, and even that is limited. Kashyap's approach to the film and its subject is similar to his other work in that the culture informs the narrative, so even though this is clearly a commercial film, it doesn't gloss over the reality of today's volatile India. Kashyap tackles casteism, religious discrimination, the increasingly violent and frequent instances of cow vigilante-ism (over the last couple of years numerous people have been lynched or beaten by mobs at the mere suggestion that they've eaten or even transported beef), toxic masculinity, violent patriarchy, the pathetic state support of elite athletes, and the seeming gullibility of a rural populace waiting for a single spark to set them on fire for a cause, no matter what it may be.

Yes, Mukkabaaz is a boxing movie, and there is actually quite a bit of boxing in it, including some great montage work, but the boxing is just the canvas on which a portrait of one man with a dream struggles against his own people in an India where one person's success is always seen as having been stolen from someone else. Unlike most recent American boxing film of the recent past - Creed, Southpaw, The Fighter, etc. - Mukkabaaz presents Shravan as a straight forward and upright hero, not a troubled anti-hero, not a cocky, flawed asshole with talent. Shravan tries at all times to do the right thing, even when the right thing is ugly and hard, this makes him different from the protagonists of Kashyap's last few films who all had their personal devils at their sides.

Supporting Vineet Kumar Singh, who gives a terrific and committed performance as the contender with fists of steel and a heart of gold, is newcomer Zoya Hussain, who turns in an exceptional performance in a dialogue free performance as Sunaina. While she does get forced into playing the role of damsel in distress a few times, it's essential for the story that she does. The power dynamic between Sunaina and her male oppressors is a key part of the backdrop Kashyap has painted for the film, and she takes full advantage. Jimmy Shergill's Bhagwan Das Mishra also plays a key part of standing in for all oppressors, a part that he plays with relish.

The story of Mukkabaaz is really the story of all underdogs, but what makes this film special is the way the film sets the stage. It isn't just about boxing, or just about romance, or even just about struggle, it's about all of these things at once, and the way the surrounding culture compounds one’s own challenges into life or death struggles at the drop of a hat. Kashyap has made one of his best, most layered films in years, and all while sticking to his guns. Vineet Kumar Singh, Jimmy Shergill, Zoya Hussain, and Ravi Kishan (who plays Shravan's wise old trainer) all turn in compelling performances that raise this film above the level at which many sports films (like their subjects) in India stagnate. There is a new bar for excellence, and Mukkabaaz is it.

Do you feel this content is inappropriate or infringes upon your rights? Click here to report it, or see our DMCA policy.
anurag kashyapindiajimmy shergillravi kishanvineet kumar singhzoya hussain

More about The Brawler