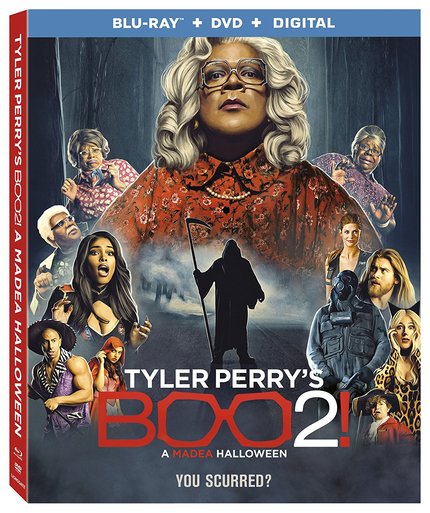 Before last weekend, I had never seen a single Tyler Perry film. Not a Madea movie, none of his non-Madea films, not a play, not even that one where he plays the Patterson cop. I think the only time I'd actually seen him perform at all was as the crazy doctor in that one TMNT movie from a couple of summers back. Let's just say that I never thought his thing was my thing. However, when an e-mail came through asking if I'd like to review Boo 2!, the sequel to his comedy-horror film from 2016 (titled Boo!, of course), I figured why not, what was there to lose?

Before stepping into the Terrordome of the MCU (Madea Cinematic Universe), I thought it would be wise to acquaint myself with at least the first Boo! film. Attempting to undertake the entire canon of the MCU seemed daunting, but certainly this I could handle.

In Tyler Perry's Boo! A Madea Halloween, the titular foul-mouthed, former streetwalking, 6'5" 200 lb aunty is tasked with babysitting her 17 year old grand-niece, Tiffany, on Halloween. The youngster sneaks out of the house and runs off to a nearby frat party where hijinks ensue and things get out of hand very quickly. Madea (Perry) and her nephew Brian (also Perry) team up with what I assume is a crew of regulars that includes a pair of similarly vulgar and horned up old ladies, and Brian's father Joe (a third Perry performance), to both rescue Tiffany and take her down a peg through a convoluted prank that ends with a prison bus and a teenager dead in a frat house basement.

I'm not going to lie, I laughed a bunch, and frequently even in spots that were intended by the filmmaker. Having dipped my toe into Perry's world, I was less apprehensive about jumping into the sequel. However, it turned out to be misplaced hope, as Boo 2! is little more than a beat for beat rehash of the first film, leading me to wonder if all of the MCU films follow the same pattern.

We pick up with the family a year later, once again on Halloween, which happens to be Tiffany's 18th birthday - a fact not mentioned in the first film - and guess who is determined to go to the annual frat party again? Newly legal and in possession of a car gifted to her by an irresponsible mother (Brian's ex-wife), Tiffany repeats her mistakes of the previous year with predictable results. The only major diversion from the plot line of the first film is that this year the party has been moved off the premises and out to a lake where 14 people were murdered some years previous. Brian and the Madea squad take off to save Tiffany from killers/horny frat boys/herself and all hell breaks loose again.

This time around, it's only the jokes that make this bearable, as every twist is telegraphed from a mile away. It is fascinating to me how the film positions itself in the market. Perry is a superstar in Black Christian entertainment circles, only in his early 40s, he's produced dozens of works for stage and screen and has a rabid following. His work is ribald and borderline vulgar, but the films are essentially morality plays for Christian family audiences, so the sex/violence/language never quite go over the top, though there are many places in both films where it's clear that the characters ad-libbed something a little too blue for the audience and they had to loop in less raunchy dialogue.

Madea frequently refers to her own past as a prostitute, and her brother talks a lot about his younger years as a pimp. Their two aunty-cohorts, Aunt Bam and Hattie are constantly making sex jokes and references about all and sundry, and a lot of the humor is surprisingly scatological in nature. I know I must sound like a total hayseed in describing these films that have millions of staunch fans, but I was honestly surprised. The overriding message in the films is very puritanical, obey your mother and father, respect all elders, believe in Jesus and he'll save you, etc... but the road to realization is very bumpy. I guess that's a good thing, as even in its ridiculous exaggerations of relatively innocuous sin (ie. sneaking out to go to a party), the film does a decent job of having some relatable characters mixed in amongst the rabble.

Will I ever watch another Madea movie? Well, if I get an e-mail about Boo 3!, I will feel duty bound to complete the saga, but I can't say I'm eager to go digging any deeper than that. It's a one joke series as far as I can tell, and I'm pretty sure I've gotten all the laughs I need to get from it. That being said, it's not nearly as dreadful as I was expecting, and I actually had a pretty decent time with the first film.

The Blu-ray from Lionsgate looks fine, though it is remarkably unremarkable in terms of craft. I watched half of the film on DVD before realizing I'd put in the wrong disc. When I switched them over, it was the DTS-HD MA audio track that was the dead giveaway, but the video seemed just about the same.

The extras are pretty minimal, but I think they reveal more about the film and its creator than they think. There is a reel of outtakes and deleted scenes which are about as funny as the stuff that made it into the film, so if the film made you giggle, they are worth a watch. There is a making-of featurette called Caddy Whack Boo which is standard EPK stuff, talking head interviews with the cast and lots of praise heaped onto Perry for his vision. The most interesting thing to me, however, was a short piece called Why We Love Joe!, in which a few people, but mostly Perry, talk about the Big Joe character (reminder - played by Perry), and how hilarious he is to be on set with. Throughout the featurette, Perry talks about Joe in the third-person, as if he's not the one under the FX, it's like he almost dissociates himself from his character, but he's clearly just spending a lot of time talking about how funny he is. He never mentions the fact that he is Joe, just how funny he finds Joe. It's a very weird piece, and perhaps indicative of budding megalomania.

Tyler Perry's Boo 2! A Madea Halloween is fine, but if you're a horror fan and genuinely curious about these films like I was, I'd probably check out the first film and leave it at that.