Review: THE SHAPE OF WATER, Guillermo del Toro At His Best 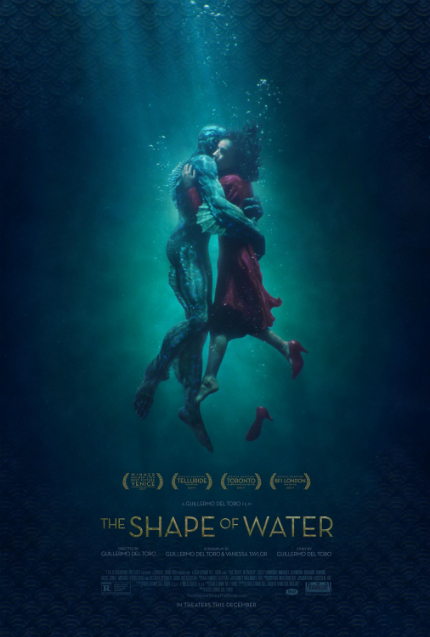 Guillermo del Toro is back with a vengeance, returning to his fairy-tale roots after too long an absence, with what is arguably his best film to date. Beautiful, sensuous, fully wearing its heart on its sleeve, with top-notch performances and a wondrous soundtrack, The Shape of Water does not hold back (nor should it) on emotional and physical connections as the only place of safety in a frightening world.

In 1960s Baltimore, in the early years of the cold war, Eliza (Sally Hawkins), a mute woman, has a predictable, if occasionally interesting, routine. She awakes in the evening, boils a few eggs, draws a bath for herself where she indulges in a bit of pleasure, takes some food to her neighbour Giles (Richard Jenkins), then goes to work as a night cleaner at a government facility.

One night, with her co-worker and friend Zelda (Octavia Spencer), they happen upon the delivery of a strange water creature (Doug Jones), kidnapped and brought against its will from the Amazon by resident bad guy Strickland (Michael Shannon). Eliza quickly bonds with the creature, teaching it sign language, as it teaches her its own language. But of course, the course of true love never did run smoothly, so there is the battle of the scientist (Michael Stuhlbarg) and the company man, who fight over whether the creature should be studied or killed.

This era of America is often looked back on with the nostalgia of perfection: the house with the man, wife and children, perfectly manicured lawns and haircuts, with nothing but white people and cadillacs as far as the eye can see. But of course, the reality was somewhat different. Granted, as usual, the production design (by Paul D. Austerberry) is perfection, right down to the shine on the chrome. But everything feels slightly strange. And the homes of Eliza and Giles are much different: for these two outcasts (one disabled, one gay), this era offers little for them in terms of integration in society. Giles' home is full of his paintings, and colour, and life; Eliza's is all greens and blues, an almost underwater world to which she (of course) has an affinity.

Eliza might be silent, which contrasts well (if a bit too stereotypically) with Zelda'a chattiness; but don't mistake silence for meekness. Eliza is a woman in every sense, with bravery and honesty and courage lacking in those who prefer the slam of the fist to the offer of nourishment. Shannon plays to type as the bad guy, but it's a type he does so well it's hard to mind it. And Jenkins gets to stretch his great talents as an older gay man, who must remain silent in spite of his feelings. As stated, most of these characters: Eliza, Giles, Zelda - are ones that were not welcome in this era, ones who did these tasks that were necessary but never appreciated.

I've always felt that del Toro was a master of design and story, but not necessarily of direction: his scripts often felt thin, carried by the overarching themes and wondrous worlds he creates. The Shape of Water is by far the strongest script he's worked with, and that is thanks to co-writer Vanessa Taylor; a veteran of televion and film, she seems to have interpreted del Toro's story ideas into a tale that, while it has no subtlety in presentation of themes and ideas, still is charming, very funny, and heartbreaking, without pandering or talking down to its audience.

And it doesn't hurt that this is also the strongest cast for a del Toro film; granted, these are not roles that are unusual of too out of range for the actors involved (with some nice appearances by Canadian actors, such as David Hewlitt), but each one gives their 'type' something extra, not just leaning on what is expected, or even necessarily what is in the script that includes discussion of sexual, gender, and racial politics.

Unabashed in its view of the fantastic as a key to hope and happiness, unafraid to confront (if not fully dive into) the era's difficult politics, with a healthy dose of sex on the side, The Shape of Water is del Toro at his best, with its design, cinematography, story, and performances, all focused on the meaning and importance of acceptance and love.

Review originally published during the Sitges Film Festival in October 2017. The film will open in select U.S. theaters via Fox Searchlight.

Do you feel this content is inappropriate or infringes upon your rights? Click here to report it, or see our DMCA policy.
Doug JonesGuillermo del ToroMichael ShannonSally HawkinsViola Davis