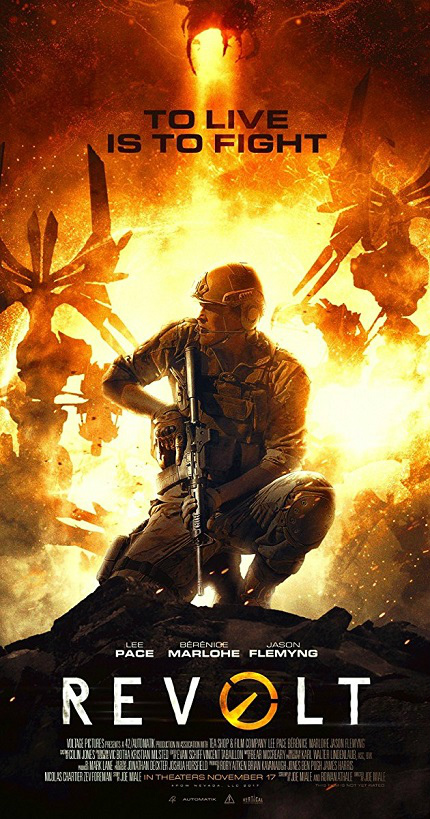 It’s a known fact that movies influence and feed off each other. With so many being made, it’s becoming harder every time to do something truly original; it’s up to filmmakers to use well-known elements in fresh, new ways. Take Joe Miale’s sci-fi action film Revolt, a hodgepodge of other films, which still manages to carve out its own identity.

It’s a simple setup: Earth (or at least Africa, in this case) is invaded by mechanical aliens that make a lot of whirring noises and have weapons that can turn humans into literal dust. Humanity fights back, but rather than focus on the big battle, Miale gives us the story of an amnesiac soldier known as Bo (Lee Pace) and sexy French doctor Nadia (one-time Bond Girl Berénice Marlohe), who must make their way to safety in the middle of a war zone.

The idea of a couple bonding while the creatures are shown mainly in the background will probably recall Gareth Edwards’ Monsters. The fact that this was filmed in South Africa means that comparisons to District 9 are inevitable, only without Neil Blomkamp’s social commentary mixed in; and the whole military-fighting-aliens angle can remind one of Battle: Los Angeles.

Meanwhile, the robotic invaders are somewhat reminiscent of the tripods from War of the Worlds, and any war movie set in Africa is bound to recall Ridley Scott’s Black Hawk Down. And so on; Miale has definitely been taking notes during the last ten or so years of sci-fi/war movies.

However, credit to the filmmakers for not merely copying and pasting. Lee Pace is probably not the first name you think of for the role of a gun-toting soldier, but the silent badass bit suits him well; he and Marlohe make for a good pair, at least one worth following for 90 or so minutes. Miale also does good with what was probably a limited budget; there are some pretty nifty visuals here, none more so than a herd of aliens stampeding through a plain at one point.

That limited budget is probably why things are kept so small-scale. The story starts opening up in the last block, but unfortunately, it ends just as things are starting to get really interesting (and the title of the movie starts making sense). Revolt ends up resembling a promising pilot for a TV series, one you would really like to see more of, since this one rushes through its setup, save for a cameo from Jason Flemyng as a wounded war photographer which makes an effort to sell the gravity of a full-scale alien invasion which the film itself doesn’t show.

As far as sci-fi movies go, Revolt simply rehashes a lot of what you’ve seen before, and any fan of the genre will probably suffer a constant deja-vu. Still, it’s interesting enough to remain watchable.

Revolt opens in theaters on 17 November.

Do you feel this content is inappropriate or infringes upon your rights? Click here to report it, or see our DMCA policy.
Berenice MarloheJoe MialeLee PaceRevolt