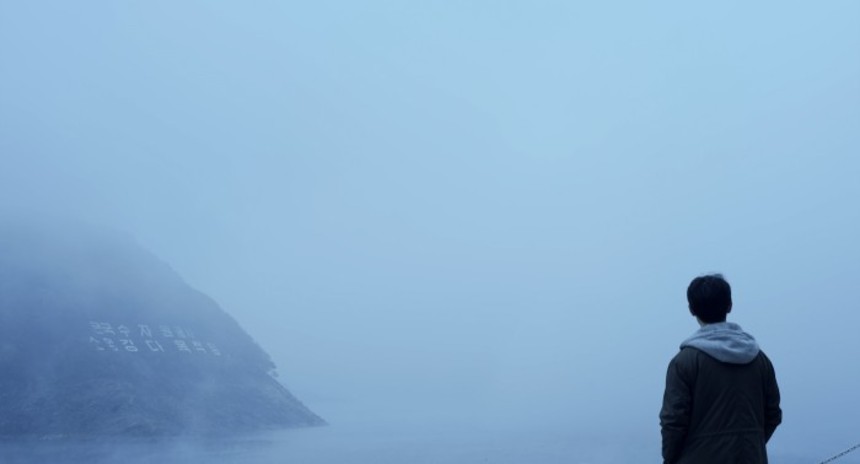 An emerging talent from South Korea, Jang Woo-jin received recognition when his sophomore feature Autumn, Autumn screened earlier this year at New Director/New Films 2017. Now the film is enjoying a limited run at the Museum of Modern Art (MoMa) in New York.

The English title of the film is a literal translation from Chuncheon, Chuncheon referring to the spatial anchor of the story. The initial master shot introduces the three characters sitting on a train to Chuncheon. Ji-hyun returns to Chuncheon from a job interview in Seoul while Se-rang and Heung-ju, seemingly two strangers, share a small talk on their trip to the capital of Gangwon Province.

After the brief introduction, the camera follows Ji-hyun in a series of freely-arranged and self-contained scenes communicating the melancholia of a lost generation. The young man experiences a sour return to the place of his childhood, vacated by their peers where only their parents keep a foothold. Bemused by opportunities in the big city, Ji-hyun sinks into ennui when he realizes how few prospects await him in Chuncheon.

Ji-hyun is the protagonist of the first part, the bearer of the perspective of the younger generation, which does not harbor high hopes from their childhood home, the market center for agricultural produce from the surrounding area. On his way home, he bumps into an old friend, who is  apparently doing well in Seoul. The director than opts for a string of moody scenes underlining the mercuriality of youth. Ji-hyun wanders around the city, the camera obviously beneficial of the genius loci, thus making the city yet another character in the story.

However, Jang Woo-jin's stylistic decisions gradually differ from those of Kogonada on his first feature effort, the mesmerizing Columbus, meticulously composed to reflect the spectacular modern architecture and the wholesome genius loci of the actual Columbus, Indiana. The disillusioned young protagonist of Autumn, Autumn visits the places from the past, not only of his private past. Indeed, the past, its reflection and definition based on two respective generations makes for the film´s leitmotif. What is the source of blues for somebody becomes the source of nostalgia for others who are on the other side of the generational age-gap.

The first part, revolving around Ji-hyun's self-pitying pilgrimage, echoes mildly the current choir of jeremiad of the young (unprivileged) generation in the rapidly changing world. However, Jang Woo-jin detaches his story from the factual side to invoke an emotional turbulence. What makes the first segment truly memorable is the outstanding cinematography, attuned to embracing the natural light.

Besides writing, directing, editing, producing and sound designing, Jang Woo-jin stands also behind the camera as his own DoP. He shoots the protagonist with inventive curiosity and the sensibility of a seasoned photographer. Shadows emerge, not solely as an aesthetic mannerism but a versatile metaphor. Ji-hyun´s arc caps a prolonged phone call to a childhood friend he has not seen in a while, taking an unexpected turn from a friendly courtesy to an uncontrollable spurt of emotions, exposing a fragile and lonely individual.

The past as an expanding central topic absorbs equally important themes of human contact and bonds. In the second arc, the director observes a middle-aged couple on another sort of pilgrimage, a hike through Chuncheon´s landmarks. They revisit the majority of Ji-hyun's spots, and even though the mood becomes a constant, the perspective and circumstances fluctuate.

The writer-director changes the storytelling strategy, keeping the actual relationship between two hikers who are revealed to have families under the veil of mystery. The reminiscing unspools under a different tone, contemplating, implicitly and explicitly, missed opportunities. Their encounter proves to be not of an accidental nature, and backhanded references to an ad make larger room for implication alongside bland hints to seek an intimacy, a human contact.

Jang Woo-jin crafts an immersive style of melancholic realism, while using Chuncheon to bolster the mood, first with lyrical snapshots of the young wanderer, secondly in the compact regime of slow cinema. In the second arc, the writer-director shoots a longer scene consisting of dialogue while shadows of clouds pass over both characters´ faces as a memento of panta rhei.

Autumn, Autumn is a cinematic contemplation on longing for human contact and loneliness, with the primary supporting character being the town of Chuncheon. The past, memory, and the human connection rotate as motifs in the double-story imbued in melancholic realism, with natural light and ambient sound contributing to the minimalist, transcendentalist veneer.

Autumn, Autumn runs in the Museum of Modern Art in New York from September 29 until October 5