New York 2017 Review: Lucrecia Martel's ZAMA Is the Cinematic Highlight of the Year 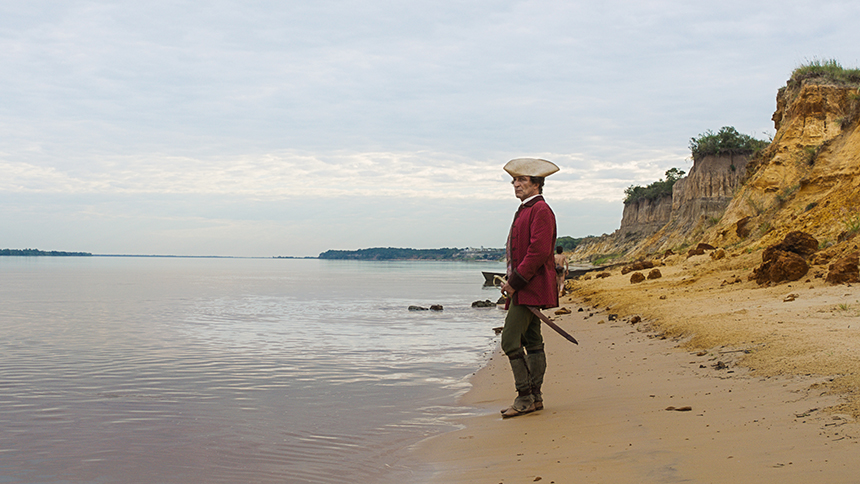 Lucrecia Martel suggested in her introduction to the sold-out screening of her much anticipated follow-up to Headless Woman that the audience might want to take in Zama like a whiskey. Indeed, it's a heady, at times bitter, at times sweet hallucinatory trip to the heart of darkness, showing the white man's identity crisis and misguided manifest destiny in colonial era Latin America.

The film is a historical period piece, based on the much praised Latin American classic literature by Antonio di Benedeto. It's a hugely ambitious undertaking for Martel, with just three films under her belt. But if anything, Zama confirms Martel as one of the greatest directors of our time. Her mastery over the medium, both in complex narrative storytelling and technical ingenuity, has grown to exceptional height with Zama.

Don Diego de Zama (Mexican actor Daniel Giménez Cacho, with an impressive Romanesque nose), a magistrate stuck in some unnamed South American colonial town deep inland in the 18th century, is anxiously waiting to hear from the Crown (of Spain) about his new assignment to the city. Even though he is a man of a certain position and has been stationed there for a while, he can't ever seem to get ahead or get what he wants -- the letter of transfer never materializes, his rival Ventura (Juan Minujín) is much better at kissing asses, and the local society lady de Luenga (Lola Dueñas) flirts with him but won't give in.

Zama doesn't fare well with the natives either; he's seen in the beginning peeping at nude women taking a mud bath and getting caught. He also has a nagging native woman who is the mother of his invalid child. And the thought of the existence of this child weighs on his conscience like a brick. His misplaced valor to protect three virginal sisters is always overshadowed by the overhanging threat of a mythical bandit named Vicuña Porto, who is notorious for raping and pillaging.

After physically threatening Ventura over de Luenga, Zama is demoted and moved out of his semi-opulent living quarters to a squalor with rotting walls, just outskirts of a city. At the governor's insistence and a promise of recommendation letter to the Crown, he delivers a scathing review of a book written by a well-meaning, trusting young civil servant (the governor can't stand the thought of the young man wrote the book while on the job). But no matter how many favors, how many people he fucks over, Zama realizes that he won't be leaving the backwater town any time soon.

Fallen out of favor and aging, Zama reinvents himself as a guide to the band of soldiers in the late stages of colonization. As they advance inland, they are terrorized by the red body paint natives who populate the land. Fighting with the elements and among themselves (one of the soldiers claims to be the elusive Vicuña- is he really? Does it even matter?), Zama and the men get completely lost in the strange land.

There have been countless other films about the white men's delusion of grandeur- Aguirre, Wrath of God and Apocalypse Now! easily come to mind. With Zama, along with lyrical Jauja few years back, directed by fellow Argentine Lisandro Alonso, Martel captures the existentialist angst in the age of colonialism/ad infinitum in Latin America with astonishing efficiency and grace. Shooting digital for the first time, Martel and her Portuguese DP Rui Poças (Tabu, The Ornithologist, To Die Like a Man), create lush, bright palates that are intoxicating and hallucinatory.

Martel's mastery of the cinema medium as sensory medium first and foremost is nothing short of brilliant. She subjects us to painterly framing and exceptional sound design in every scene. Those of you who followed her trajectory closely through La Cienaga, Holy Girl and Headless Woman and have been admiring her artistry will be richly rewarded here - a carefully measured framing where people's faces are just off the frame, shallow depth of field, soft focus, the full use of background/foreground and the use of dialog fading in and out with internal monologue thrown in, just to name a few.

She also uses the Shepard Tone whenever there is a dramatic moment for Zama. The tone is an illusory aural phenomenon that creates continuously swelling sound which builds tension and suspense. All these are very simple methods and not radical experiments at all, but it's Martel's simple approach that makes everything so fresh and radical. As you watch Zama, you can't help but feeling that you are watching a true cinematic masterpiece.

Finding the Latin American identity, as European settlers and their offspring, has been the continuous source for great literature over 300 years. Throw in the idea of class, masculinity, racism, sense of belonging, you get a very complex picture of what makes up the theme of Zama.

As usual, in Martel's hands, what seems to be an extremely messy affair at first, the sense of cohesiveness emerges from the chaos, then the sense of warm comfort wraps around the whole experience. Even though Zama is a lost character who goes through traumatic experiences, there is sense of catharsis that is reached in the last moments of the film. That he finally found home, that he reached his el dorado, imagined or otherwise. Zama is a utterly brilliant film. See it on the big screen if you can.

After two soldout screenings, NYFF decided to add the third screening of Zama on the last day of the festival, October 15. For tickets and more info, please visit FSLC website.

Do you feel this content is inappropriate or infringes upon your rights? Click here to report it, or see our DMCA policy.
ArgentinaDaniel Giménez CachoLucrecia Martel