Busan 2017 Review: THE THIRD MURDER Ponders the Unknowable in Quiet and Electric Mystery 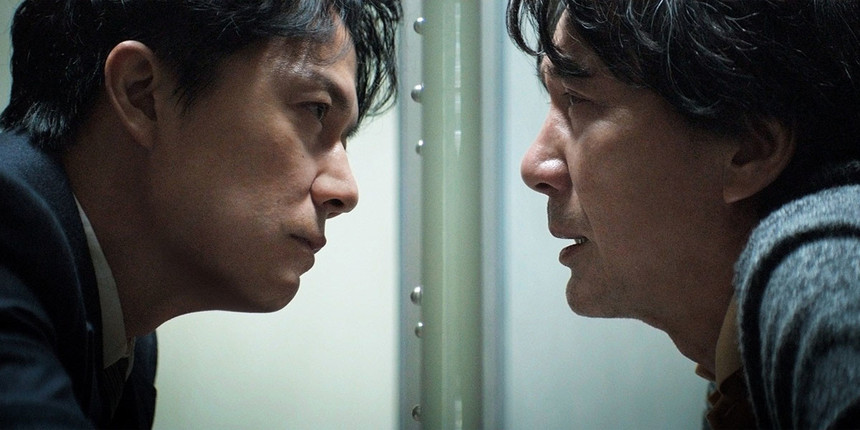 Known for his controlled and humanistic family dramas, acclaimed filmmaker Hirokazu Koreeda tries his hand at the bread and butter of the Japanese mainstream, the murder mystery. The result, which he directed from his own script, is the ruminative and masterful The Third Murder, which weighs the meaning of justice and the value of life and features top-drawer performances from Masaharu Fukuyama and Koji Yakusho.

A man walks behind another along a river bank at night, murders him in cold blood and sets fire to his corpse. The criminal is Misumi, a middle-aged man who was only recently released for a double murder 30 years in the past. He readily admits to his new crime, but a legal team is assigned to try and do the impossible: reduce his sentence from the gallows to life in prison. Leading the team is the hotshot Shigemori, who is less concerned with the truth than the technicalities that could help their case. Yet Misumi's testimony proves to be permeable, and as the mystery of his motivations becomes ever more elusive, Shigemori, whose father was the sentencing judge on the double murder three decades prior, also becomes less sure of what he is looking for.

The main question pondered in Koreeda's latest is the value of a person's life, and whether it should be up to the criminal justice system to decide if someone deserves to die. Though the themes are heavy, the narrative is never plodding and Koreeda offers many details to allow us context in this metaphysical discussion and the increasingly unknowable nature of the crime doesn't point the moral compass one way or another. The expressive mutability of the tale allows us to consider our own positions, while broadening the scope of our questions.

Koreeda and cinematographer Mikiya Takimoto have been collaborating for a long time on handsome films, but The Third Murder is shot with unusual crispness, with a series of intriguing tableaus boasting clarity and layered depth in equal measure. A significant portion of the film takes place in the same small room, with low lighting and decor limited to the plexiglass separating Misumi and Shigemori. Two actors and a glass wall offer myriad insights in these tense and engaging scenes and particularly impressive is the blocking of the performers, as gradual changes in position allow the camera to slowly creep forward and overlapping reflections dance to and fro as the balance of power constantly shifts between them.

As the lawyer and his client, Fukuyama, who featured in Koreeda's Life, Father, Like Son, and Yakusho of The World of Kanako, are a scintillating pair in the film's central showdowns. Fukuyama's dry and serious exterior gradually crumbles as his assuredness wavers, and Yakusho is extraordinary in his impenetrable vagueness as he slides from simmering menace to aloof affability.

Koreeda fans may find his latest quite dry while Japanese thriller aficionados might consider this tale to be somewhat bloodless, but anyone willing to adjust their expectations slightly will find a powerfully philosophical and meticulously designed work that fuses high art and grand entertainment. The Third Murder is the kind of electric cinema experience that strives to show us something new and whose images linger long after the credits.

More about The Third Murder