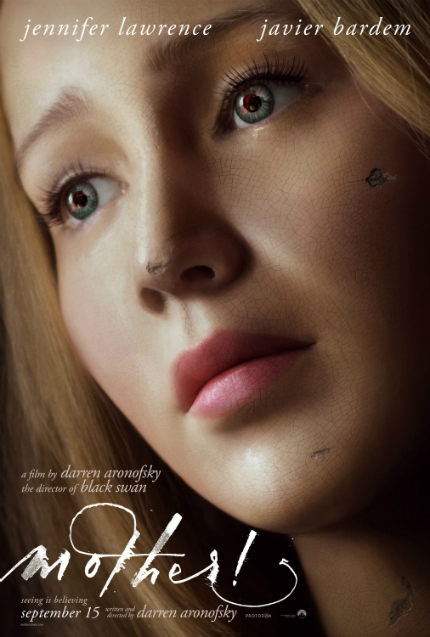 Director Darren Aronofsky has set the 47th Biennale Main Competition alight with an infernal psychological thriller that definitely burns with the fire of his past films Black Swan and Requiem for a Dream.

It's perhaps not surprising that mother! is a knock-out, seeing as both the festival and the team behind the film were confident enough to leave its debut so close to the movie's release in mutliple territories. But as a piece of cinema, it will prove divisive, and it has already lead to mixture of applause and boos at press screenings at this year's festival.

Well, I for one would like to go on the record as saying that Aronofsky has made here a real otherworldly masterpiece here, and it will most certainly be making it onto the list of films from 2017 that I truly love. Now as the film's marketing campaign exponentially explodes across the world, there will be a backlash, but trust me, mother! really is something you cannot afford to miss.

Part of what makes mother! such a remarkable experience is how incredibly uncanny and mysterious it is. At first, it opens almost like a poem, with just a few powerfully cinematic images. From the depths of Aronofsky's big black mirror you first see Jennifer Lawrence's piercing eyes, with the rest of her face shrouded in painful, scalding fire. Her gaze speaks of an anger which the fire has not yet been able to erase.

In a somewhat dreamy sequence, next comes Javier Bardem in a white shirt and slicked back, black hair. In his hands he bears a giant crystal, which he places upon four upward facing pins in the corner of a derelict room. Much of this film continues in this kind of enigmatic vein, and before we have any chance to make sense of what it going on, the house begins to regenerate from the crystal outwards.

From the floor up, the walls, banisters and furnishings all begin to replenish, and as we follow their progress, we arrive at the bed of a very mortherly looking Jennifer Lawrence, who sleeps restfully on her side in a giant double bed. She awakens to a house full of luxuriant, autumnal colours - a house that seems brilliantly timeless, sitting somewhere between a centuries-old plantation house and a modern day country house.

Lawrence's face suggests that the scene is as mysterious to her as it is to us, and she anxiously sets out in search of the person who seems to be missing from the other side of her bed. Soon she crosses paths with Javier Bardem, another character who remains strikingly and cryptically nameless throughout this film.

But the expressions on their faces clearly suggest a familiar intimacy, and soon it transpires that they are a couple who have retreated to a small, secluded house where Bardem struggles to overcome writers block and pen his next great piece of poetry. Meanwhile, Lawrence proves to be something of a house-builder, and with what seems like great ongoing frustrated creativity, she sets about cooking, plumbing and just generally refurbishing the house from top to toe. This relationship slowly intensifies and becomes more and more interesting as Lawrence's deep, unconditional affection for this poet becomes unavoidably apparent.

Meanwhile, Bardem seems forever distracted and fleeting. He talks over the end of Lawrence's sentences, and never really listens to what she is saying. All in all, this perhaps gradually grows into something of a quite problematic male-female character dynamic (the very film's title after all explicitly reduces Lawrence's character to a mother), but in due course, I would argue that mother! actually becomes far too complex for that kind of reproach to still be appropriate.

What's interesting, too, is that whilst Bardem shows disinterest in his adoring other half, Aronofsky's camera literally only has eyes for Lawrence. As she struts about the house in an almost seethrough nighty, the camera follows her like a faithful sheep dog. Moving steadily always in her footsteps, the camera always only jerks, bobs and weaves when she does. And it is forever close to her person in the film's tight domestic setting.

Time and time again, we are kept tightly wrapped up in her perspective as the camera catches shot-reverse-shot sequences that intricately detail Lawrence's expressions and what she sees. We are kept close to the mother's perspective with the almost endless anxiety of a small, confused child. And this effects only heightens the frantic mysteriousness of mother!. In fact, I think it's one of the first effects that really begins to drag this great thriller into a psychological dimension.

Nevertheless, Lawrence is also infantalised. It's almost as though she embodies some kind of deep-seated desire to gain the affections of a distant, almost monolithic father in the form Bardem. And the way that mother! is both written and filmed definitely encourages lots of these kinds of interpretations. But it's really all left up to you - it's one of those experiences that really always intensifies the more you think about it.

So when a mysterious doctor and his wife appear unannounced at the characters' house, this soon changes the way you see mother! again. Their arrival hurtles the film off into quite a different allegorical dimension, like the whole film was a religious fairytale. These two newcomers seem to be forever strutting around in black and fornicating about the house, giving a strong sense of their devilish nature.

Together they seem to slowly ruin this couple's Eden, and tempt them into various sins, exacerbating the rifts between the couple and often turning it into a division between good and evil. But at the same time, Lawrence's actions and performances always seem to keep mother! on the side of a realistically horrified and confused social reaction to what is happening. The tension this in turn creates between fantasy and reality is really rather brilliant.

The use of sound design in these moments is really rather exceptional too. The actors constantly creak noisily round this seeming old, wooden house, and their voices carry loudly whilst at the same time remaining distant and indistinct. It's a sort of distance of sound I have never really experienced being used in film this intensely before, and it definitely adds another pyschological layer to the movie, giving mother! this fascinating texture of paranoia.

This also makes the fast-paced aggressions and strange social transgressions that Lawrence constantly and defencelessly encounters in this film seem delightfully absurd. Yet at the same time they also feel incredibly cathartic, and it's as if you are sucked into some kind of familiar horror of everyone around you. These sorts of feelings you almost didn't realise were playing in the background all come to the fore when mother! sticks its searching claws into you.

Somehow mother! really does touch a chord on a very deep human level, and it really does seem like one big cluster fuck about the many divisions in us all. Particularly the divisions between one human half that wants to go out and be loved on a vast social scale (in this case Bardem), and another that wants to always retreat and reforge deep, personal, childhood bonds (as Lawrence's character does).

What I really love about this film, too, is the fact that as it becomes ever more hellish in its rush towards an apocalypse, the human divisions it explores become ever more varied and complex. These searching religious, allegorical and psychological dimensions even branch off into an exploration of the role of the writer in fame and as a god-like figure for those who love their work. Now I know that a number of critics really objected quite heavily to this dimension mother!, saying that they felt it was self-indulgent and grandiose, but again, I am on the side of Aronofsky on this one.

Why the hell should a director be constrained to pretend that there is no presence of themselves and their own demons in their work? And what's more, once you've shaped Lawrence into a sort of mystical Everywoman, representing the battles of creation, adoration, chaos and destruction we all must face, how can any director rule themselves out completely?

I just don't buy people's arguments against mother! that it is convoluted, grotesque and self-indulgent. I feel like it's a deeply complex bit of fiction - one that will mirror back to you just about any interpretation you care to have, and at the same time it manages to be a completely enthralling, just as Black Swan and Requiem for a Dream were before it. I think this is exactly the kind of film that future generations will measure our contemporary cinema against.

Kudos to Aronofsky, and two fingers to all the haters.

Do you feel this content is inappropriate or infringes upon your rights? Click here to report it, or see our DMCA policy.
Darren AronofskyEd HarrisJavier BardemJennifer LawrenceMichelle PfeifferVenice 2017