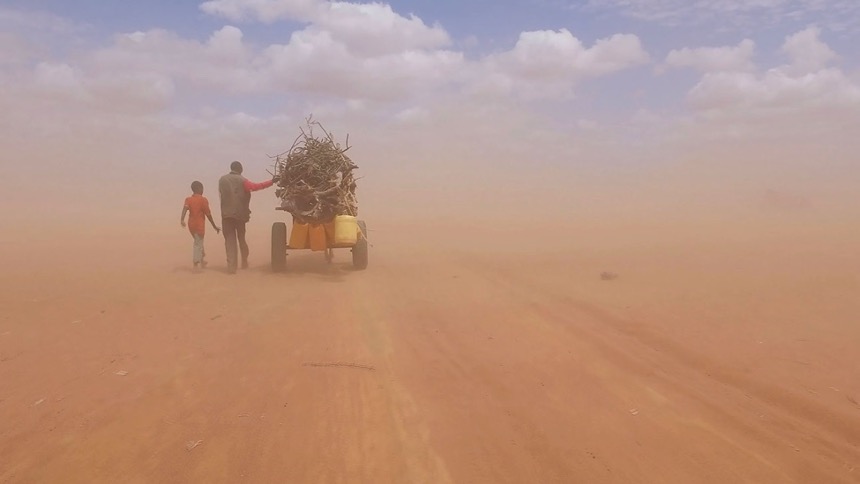 It seems appropriate that this year’s lead artwork for the 74th Venice Biennale should reference Singing in the Rain, given that Italy’s entire expected summer rainfall seems to have descended in the last few days. Nevertheless, whilst the effects of these downpours are hard to dry off, films like Ai Weiwei’s Human Flow are fortunately channelling a mesmerising visual kind of hydraulic force that is hard to ignore in this year’s main competition.

Providing a measured and composed response to the migration crisis that has been a hot topic for years, Human Flow opens with a characteristic serenity. From the viewpoint of a lofty drone we see a gorgeous, expansive aqua-marine scene beneath us. First a large white bird glides below, then we see a small boat coated in little orange flecks. Somehow, the film’s pace and movement make everything seem almost inconsequential. It tangibly feels as though the whole documentary, and everything that we see in these scenes is floating around us.

Slowly, however, from amongst this artistic capsule - where the sky meets the sea in a mixture of the most ethereal blue - it begins to dawn on you that what you see below is actually a life boat full of people fighting for their lives. People are making a perilous attempt to reach Europe before our very eyes, and they are finally reaching salvation as an emergency crew begins to pull them ashore to safety. In capturing these moments in this way, Human Flow does risk turning these people’s genuine suffering into art, or worse something that can even be commodified. But this documentary just about manages to side-step this peril using a smart technical decision.

Human Flow repeatedly switches between drone, high-end steadicam footage and rough shots captured by Ai Weiwei himself on a little handheld camera. As well as lessening the beautification of the crisis in doing so, the triangulation of these three distinct viewpoints also enables Human Flow to implicate the artist Ai Weiwei (as is so often his style) in what we are seeing, and make what he is doing something for discussion too.

As a result, Ai Weiwei often becomes an active participant in the act of saving and relating to numerous migrants. And over the course of what seems like it was a very lengthy and far-reaching project, we repeatedly see Ai Weiwei (with varying lengths of beard growth) bumbling around trying to help people with his distinctive, gentle shuffle. He meets migrants and tries to make them feel at easy, becoming part of what feels like a literal visual discussion that often faces various language barriers.

The use of drones to film refugee camps and acts of migration in this film is also work rather smartly. Even if almost anyone can now film something with a drone, it does take real skill to create such an ample and visceral sense of migratory momentum using one, and it also takes real skill in terms of editing to pace this footage so that it works to have the right effect. In Human Flow, drone filming is a triumph, and it clearly represents a very deliberate attempt to place human individuals in the wider context that contains and tugs at them whilst they struggle to build a better life for themselves. It also more often powerfully demonstrates the full magnitude of the situation which the media of late seems to have been keen to be quiet about.

Nor does Human Flow dehumanise the lives of the people it films by distancing itself in this way either. It overcomes this potential danger by switching back and forth to more conventional digital footage, which places us in the footsteps of those who are literally in the act of migration. These oscillating visual snapshots that the slow-motion camera achieves is one of the documentary’s highlights, and it truly distills something of a rhythm from the act of physically migrating (often on foot) from one place to another. What’s more, it then shows how the same striking rhythms can often exist right across the globe, be they in Europe, Africa, Asia or the States.

Nor do these people who we follow remain voiceless, as they do in documentaries like Gianfranco Rosi’s Fuocoammare. Whilst Human Flow does perhaps at times seem to lean a little heavily on the voices of rousing experts, it does stop repeatedly to take the time to hear the thoughts and feelings of migrants; and whether they be the voices of stranded survivors in Greece or persecuted Rohingya in Myanmar, or war sufferers in Syria or Sudan, what they have to say is an absolute shot of emotion to the heart.

It once again shows how Ai Weiwei’s painstaking documentary is all about re-instigating discussion and confronting the realities of what is a natural part of human existence. This emphasis on dialogue is also clearly all about education, and Weiwei definitely takes it upon himself to open our eyes to as many different cultures and experiences as possible. As a result, this documentary really plays a powerful part in trying to explode the myths that exist in Europe that all refugees are flowing uncontrollably towards Europe. Instead, we see that in reality there are far greater and more prolonged instances of migration across the globe.

In showing these many, many ongoing crises or aspirational choices that are unfolding across the globe, however, Human Flow does ever so slightly lose its own tautness; and its impact is perhaps lessened by the way in which it leaps back and forth across the globe. Perhaps documentaries like Locarno entry Untitled nail this overarching attempt at a documentary travelogue better, but nevertheless Ai Weiwei’s effort is really a rather important attempt to capture with a wide lens what is going on in the world.

It’s an experience that’s well worth sharing, and what’s more, it’s full of Weiwei’s distinctive character and humour, and makes for a really rather wonderfully artistic attempt to photograph the portraits of millions of people who are not adequately having their stories told. In doing so, Human Flow demonstrates powerfully the ability we all have to help, to intervene and to tell these important stories, and I’d recommend checking it out.