Review: INDIVISIBLE, The Pain and Joy of Constant Companionship 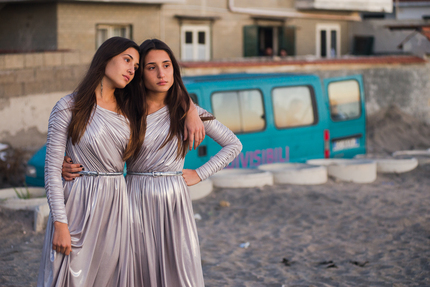 If we are only truly ourselves when we are alone, what would it mean if you were, quite literally, never alone? If both your private and public identity was entwined with another person whose presence was constant? If your body, you spirit, in many ways, was never your own? Director Edoardo de Angelis in the Italian drama Indivisible, a beautifullly shot and performed story about sisters whose coming-of-age presents a far greater challenge to their identity than most young people.

Daisy and Viola are conjoined twins, joined at the hip, growing up in a working class town near Naples. Their father, something of a small-time hustler, uses his daughters' unusual physical feature and beautiful singing voices to cash in, parading them as local entertainment in voice and as sideshow. But when a doctor tells them they can be seperated, the sisters must struggle with what that would mean to their relationship and future, and their father is adament that he not lose his cash cows.

The girls have spent most of their lives being public property. Their father controls their schedule, while their mother mostly smokes and goes along for the ride. At singing gigs, people are encouraged to touch their conjoined flesh. The family still lives, not in poor circumstances per se, but certainly without glamour despite the money the girls bring in. Their father gambles, their mother buys useless appliances, and Daisy dreams of Los Angeles.

Indeed, when it is revealed that their parents lied about the possibility of seperation, it is Daisy who lashes out. She wants to find her identity, not only outside of the work forced upon her by her father, but outside of Viola. It is not that she doesn't love her sister, but like most young people, she needs to find herself; impossible when you are always with someone else.

De Angelis moves his story from Italian working class neo-realism to the fringes of Fellini; Daisy and Viola are characters that might have been in a Fellini film, but their socio-economic class is clear, so even their status as semi-sideshow attraction does not warrant their advancement. They are able to see how those with money and freedom live, but while under their father's control, they cannot touch it.

Daisy and Viola are a beacon of light and beauty against the backdrop of the poverty of their town, their father's manipulation and control, their mother's resignation, and in their almost-finished adolescent joy in each other. But after meeting a man who could give them a independent future, Daisy's rebellion grows stronger, as does Viola's attachment, threatenting their bond.

Within this social reality, de Angelis weaves the girls into their own dreams: Viola's of continued attachment to her sister, Daisy's of freedom and a life far away from her family. A tinge of road-movie tropes enter as the girls ride along a backroad, Daisy at the wheel, almost willing the scooter to take her all the way to her dream city of Los Angeles, as though she were a rebellious angel, passing by all that she hopes to escape.

With an inevitable but nonetheless heartbeaking and harrowing climax, matched with incredible performances by young leads Angela and Marianna Fontana, Indivisible strikes a chord in the heart of anyone who has wished to escape the clutches of a too-small life, even at the expense of a great love.