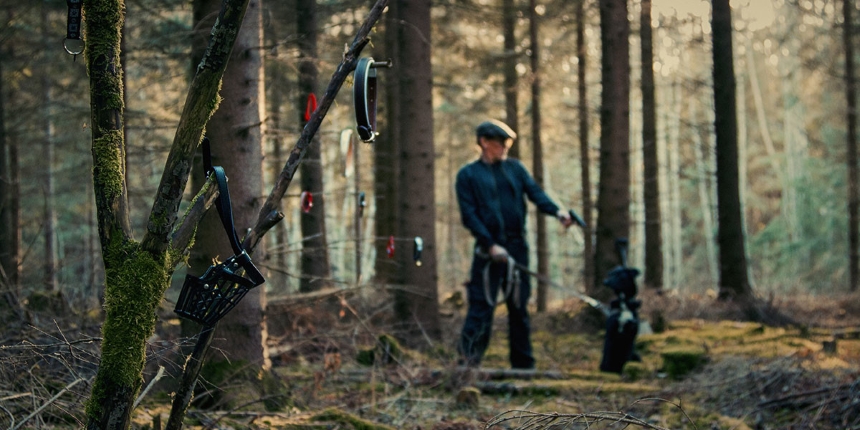 Welcome to Haukka's Repairs And End Solutions. A dilapidated auto repair shop in a small town in Finland where the proprietor, Veijo, occasionally fixes cars, but mainly he runs a business of putting down pets for owners unwilling to pay the high fees from the local veterinary hospital - either for healing the pets or euthanizing them.

An animal lover himself, Veijo is a hermit and a philosopher of the human condition. When people bring their unwanted pets to his shop for the 'end solutions,' he is rather adept at sussing out their often selfish reasons for either neglecting, or divesting themselves of the animal.

Killing the animal, to him, is putting it out of its misery, and he lets his clients know this in no uncertain terms, right to their face. Sometime these confrontations and fees come in the form of a lecture ("It suffered because of you.") Other times, it is...something a little more hands on, of the poetic justice, eye-for-an-eye, variety.

When he is not shooting dogs and gassing cats, he goes for long drives along the backwater roads of Finland, stopping to scoop up any roadkill and give it a proper burial. He occasionally visits his ailing father in the hospital, where the nurse has an eye for him, while she spoons soup to his father's cracked lips.

You might have gleaned by now Teemu Nikki's Euthanizer is not a sunshine and roses type comedy. But it being from Finland, I would be lying if I did not say there are moments of the darkest, deadpan humour tucked in unexpected corners of the storytelling. Mixing in some rough (but thank goodness, consensual) sex, a thuggish gang of white supremecists, and likely the highest domestic pet bodycount in the history of the medium, this is one of the more squalid, begrimed pictures from northern Europe since 2007's Ex Drummer.

The lead, Matti Onnismaa, is a dead-ringer for Ciarán Hinds, with his stone-cold visage and intelligent eyes, he commands the screen with his silence. Onnismaa usually plays tiny parts as toughs and heavies and shines here as the stoic man's-man. But, here he essays Veijo as a lonely soul steeped in personal suffering, who stifles his rage at the gross failings of humanity with a veneer of quite, practical composure. That is until he doesn't. The film makes effective use of speeding cars or trains roaring through the frame, all sound and fury and speed, when Veijo loses his composure. Consequences happen.

His mantra is that you cannot do anything you like to other people without consequences. He seems willing to pay the price more than most people, but is not exactly Christ-like. He observes of one awful father, who comes to him to put a dog down because he doesn't want to pay the $200 to get it spayed, "If you don't know your place in the world, you pass your pain onto others."

This is undoubtedly true, because the man is human garbage, But the irony that Veijo misses (the film does not) is that this also applies to himself. He scolds a woman while he gasses her daughter's guinea pig for being was vile in keeping the type of pet without a companion, as it is torture for the species. Again, the film reflects this back on his own personal blindness.

With the aesthetic and the narrative trappings of sleazy revenge caper (existing somewhere in the wide landscape between Pusher and John Wick)  Euthanizer differentiates itself by steering the ship with a character-based arthouse sensibility. And it is quite beautifuly shot with a darkened noon-time glare, all squints and shadows.

Like Ruben Östlund's more ostentatious Palme D'Or winner, The Square, it is convinced that humanity is only a hairs breadth from the beasts, and the animals probably have the moral high ground. But here, on the other end of the class divide, that of poverty and violence, any chance of a detached, above it all, satire is mired down in the muck of stupidity and suffering.

If you are the type of person that does not bat an eye when people are killed in the movies, but cannot stand the sight of harm coming to a critter, this is probably not the movie for you. Notable, however, in a thankful act of good taste, all of the animal violence occurs outside of the frame. But for audiences used to the typical ebb and flow of exploitive genre cinema, Euthanizer offers something truly different, both familiar, and yet, unquestionably deeper. All the while, singing to the tune of its own bleak worldview. What song would you care to die to?

Do you feel this content is inappropriate or infringes upon your rights? Click here to report it, or see our DMCA policy.
Alina Tomnikovautoerotic asphyxiationFinlandJari VirmanMatti OnnismaapetsTeemu NikkiToronto 2017