Review: AMERICAN MADE, Crime Doesn't Pay This Much, Usually

Tom Cruise stars in a breezy knockabout comic adventure, directed by Doug Liman and based on a true story. 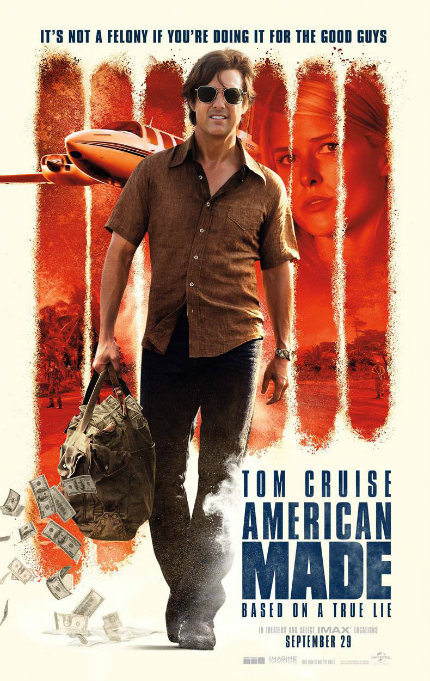 Tom Cruise only appears to be in cruise mode in his latest film, American Made, a breezy, largely comic adventure about an American pilot who was drafted into undercover service by the CIA in the late 1970s and then became a criminal drug runner. And yes, it's based on a true story.

Under the expert direction of Doug Liman, however, the film becomes a deceptively entertaining moral lesson about a confident, likable fellow who cannot resist the magnetic lure of easy money. The youngest pilot in the history of TWA, still an international air carrier at the time, Barry Seal (Cruise) finds himself stuck flying regional routes in the U.S.. He's bored silly, but he's happily married to Lucy (Sarah Wright) and has children and so he's resigned to his fate.

Then fate itself comes calling in the person of CIA agent Schafer (Domhnall Gleeson). With evidence in hand that Barry has been illegally smuggling Cuban cigars for friends, Schafer offers a way out: come spy for us! Barry is soon outfitted with a speedy small plane and equipment to spy on anti-government guerrilla forces throughout Central and South America.

It's all good fun for Barry, but he's got a growing family and and increasing expenses, and the CIA declines to give him a raise, so when a drug cartel comes a-calling, Barry is all ears. After all, his plane is empty for his return trips to the U.S. anyway, so why not maximize his time and profits?

Barry's skills as a pilot are contrasted with his limitations in other areas of his life. According to the whip-smart original screenplay by Gary Spinelli, Barry is a classic middle manager. Give him something to do, and he'll come up with the best way to do it. He accepts responsibility for his own actions and tries to provide for others as much as possible, not only with his fellow workers but also, more importantly, for his family, treating them kindly and gently, and controlling his own emotions around them, for the most part.

Yet he also quickly stands down from power; yielding without question to his CIA controller and his various criminal associates. He never rejects a payday, no matter the source, and prefers to ignore the very negative side effects of what he's doing. It's all about the money for him, and he very much enjoys making it and spending it, until it becomes a chore to find hiding places for all the cash that he's socking away.

Spinelli's script supplies a supple backbone for the film, allowing director Liman to shift at will through broad comedy, obligatory drama and dynamic action. It's a marvel to watch Liman's control over the mood and atmosphere; while relentlessly moving forward, it also pauses and sometimes backtracks to allow the meaning to sink in.

The film has been constructed as a star vehicle for Cruise, but Gleason makes a good mark as the CIA agent and Wright balances Cruise with Southern spunk and strength. Cruise sallies forth with a broad smile and constant charm, while also making it plain that Barry was a pawn in a game he didn't understand. Forces that were larger than him were at play, and he honestly didn't care, as long as the money kept flowing in. It's easy to feel sympathetic toward him, but it's not like he was an innocent.

Liman and Cruise teamed up previously for The Edge of Tomorrow and it's obvious that they work well together. American Made is not at that level of creativity, but it's got plenty of meat on its bones to chew over when the lights come up.

American Made will open in theaters across North America on Friday, September 29.

Do you feel this content is inappropriate or infringes upon your rights? Click here to report it, or see our DMCA policy.
Barry SealDomhnall GleasonDoug LimanSarah WrightTom Cruise

More about American Made