Blu-ray Review: Hitchcock's REBECCA, Or Is It Selznick's? New From Criterion 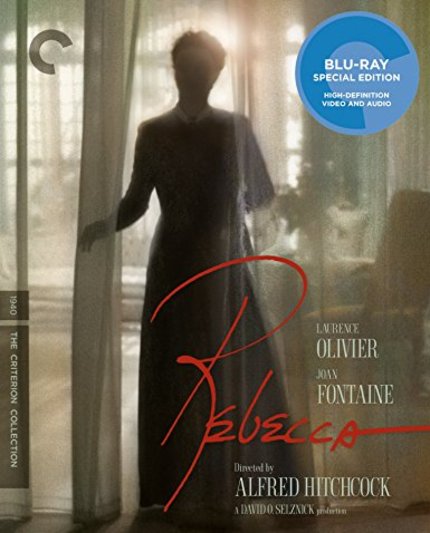 Authorship is a tricky concept in filmmaking. For the last 50 years, serious film critics have debated the nature since the concept of the "auteur" arose from the French critics who would propel the Nouvelle Vague to international attention.

These critics; Godard, Demy, Resnais, and in this case especially Trauffat, took cinema in exciting new directions under the directive that the film should be the vision of the director, using a singular and recognizable voice and style. This was something they felt was missing in the typical Hollywood fare of the time, apart from one filmmaker, the legendary and iconic Alfred Hitchcock.

Hitch was among a very few filmmakers working in the Hollywood system that the French credited with the idea of auteurship. His films were clearly the work of a unique voice, and one could spot a Hitchcock film within the first few minutes. Later they would attribute these same characteristics to rebel American masters like Sam Fuller and Nicolas Ray, but Hitchcock - alongside Howard Hawks and a few others - was the shining example of a filmmaker who was able to not only make his own films his own way, but do so in a critically and financial successful way.

Then, there is Rebecca.

In 1940 the political situation in the UK and Europe was growing untenably hostile for artists in many nations that served as hotbeds for creativity. While filmmakers like Fritz Lang had left continental Europe and Germany years earlier for friendlier shores in the US, the British had a bit more stability to hang around longer, but by the time Hitchcock decided it was time to make a move in 1940, it was really for his and his family's survival. The first American project that Hitch took on was an adaptation of Daphne DuMaurier's incredibly successful novel, Rebecca, at the behest of the legendary producer David O. Selznick.

Selznick's methods with directors were already notorious by that time, and in hindsight, it'd be difficult to imagine a more ill-fated partnership than the one he was forced to forge with Hitchcock. While we think of studio meddling as hindering to major productions these days, with Selznick, it was a constant barrage of notes and changes that left many directors dizzy and wondering why their names were on the pictures at all. This being his first Hollywood production, Hitchcock largely went along with the process, though in the end, several key sequences were altered or reshot by Selznick to match his own vision.

The final result was a film that fell very much in line with the kind of films Selznick was making, and a rather visually tepid American debut for Hitchcock. Rebecca is an all-time classic, and the winner of the Oscar for Best Picture that year, but it lacked the flash that savvy American filmgoers had already come to expect from Hitch, and upon the release of his next few films it became clear that this was not a work of pure Hitchcock like the rest of his '40s output.

The story, a tale of love, betrayal, treachery, naivete, and jealousy, is the stuff of a Hitchcock wet dream, and there are certainly moments in Rebecca that scream his name, however, in the end it feels like many melodramas of the era, rather than the auspicious American debut of a once-in-a-century talent. The film's authorship is so confusing, in fact, that while it won the Oscar that year, it did not win the award for Best Director, which means that the statue only went to Selznick and not to Hitchcock at all, perhaps a fitting coda to the story of Rebecca.

Of the film itself, there's not much for me to say taht hasn't been said a thousand times over by men and women a infinitely more adriot in their observations. Rebecca is a wonderful film, one that takes the audience by the hand and skillfully leads them down one blind passage after another in an attempt to frame the story in a way in which we sympathize with the film's unnamed heroine, "I" (Joan Fontaine), as she attempts to navigate what seems like an eternal fugue state resulting from her attempt to assimilate into the world of her new husband, the wordly widower of the titular Rebecca, Maximillian De Winter.

Though it frequently seems as though Selznick's tentacles are controlling the productions in broad strokes, it is Hitchcock's talent for subterfuge and his uniquely English sense of humor shine through and make it stand out. Rebecca is far from my favorite film from my absolute favorite filmmaker - I could name a dozen I'd rather watch first - it's hard to deny Hitchcock's skill and abilities based upon this first foray into the Hollywood machine.

Rebecca has been available on Blu-ray for several years in a special edition from MGM that was perfectly adequate, however, the film was available on DVD from The Criterion Collection back in the early '2000s in a version that had been out of print for years, and a collector's holy grail. Criterion has reacquired the rights to the film - and hopefully the other two Hitchcock's that were bundled with it, Notorious and Spellbound - and their new release combines the best of all possible worlds in a double Blu-ray special edition that contains most of the archival materials from their early version with a host of fascinating new material for this most recent release.

First of all, the film looks stunning in the new 4k transfer that will have viewers salivating over every last detail of Maxim De Winter's Manderley estate and Joan Fontaine's stunning wardrobe. The black and white photography follows the customs of the time; hazy closeups of beautiful women and tack sharp exteriors are rendered beautifully in this new edition. The mono audio appears to be faithfully recreated with no distracting audible damage.

The extras included are immense enough to necessitate a second disc, and so voluminous that I'll have to short change at least a couple in order to make this review relatively succinct.

On disc one, alongside the film, we are treated to an archival audio commentary from Leonard J Leff, an isolated music and effects track, a 2008 making-of documentary, a conversation between author Molly Haskell and scholar Patricia White, and a trailer. The commentary is very informative, and sadly, overly formal.

I love a good commentary, but the ones that sound like lectures tend to put me to sleep a bit. This is not the fault of Leff, however, as the commentary was recorded in 1990, at which point no one really had any idea of what these should sound like. That being said, many classics films suffer from the same kind of droning commentary tracks as the people involved in the production are most often long gone.

The making-of documentary is 28 minutes long and fairly informative, though it suffers from being examined by an almost entirely male crew of historians, and in a film like this, it does tend to overlook much of hte film's subtext. Which leads me to my favorite of all of the materials in this set, a 25 minute conversation between Haskell and White that cuts to the heart of the story and Hitchcock's careful adaptation thereof.

This conversation, from a feminine perspective, is a crucial window into the film and the ways in which Hitch's view of Rebecca manages to capture the author's intentions and how Fontaine's demure portrayal of a woman seemingly out of her depth hits just the right chords all teh way through. It's a fascinating conversation and if there is any extra on this disc that is essential, it is this one.

Disc two holds the majority of the holdover material from Criterion's prior release including screen tests with Fontaine, Vivian Leigh, Anne Baxter, Loretta Young, and Margaret Sullavan, three different audio versions of the story, including one from Orson Welles' Mercury Theatre, a pair or interviews from The Tom Snyder Show with Joan Fontaine and a career spanning interview with Hitchcock in his later years, and a 2016 French documentary on the life of Daphne DuMaurier.

The documentary is among the more fascinating bits from the set, running nearly an hour and talking about her life and her sexuality - especially interesting when thought about in connection with the lesbian undertones of Rebecca - and is worth checking out. However, it is the forty minute Tom Snyder interview with Hitchcock that had me rapt. Hitchcock was a rapscallion right into his twilight years, and though he may not have been light on his feet in his '80s, his wit was keen, and this is an excellent time capsule.

Criterion's upgrade of their own Rebecca release is essential for serious film fans, and this is definitely one to save up for as the bonus material is almost worth the price of admission all on its own. Highly recommended.