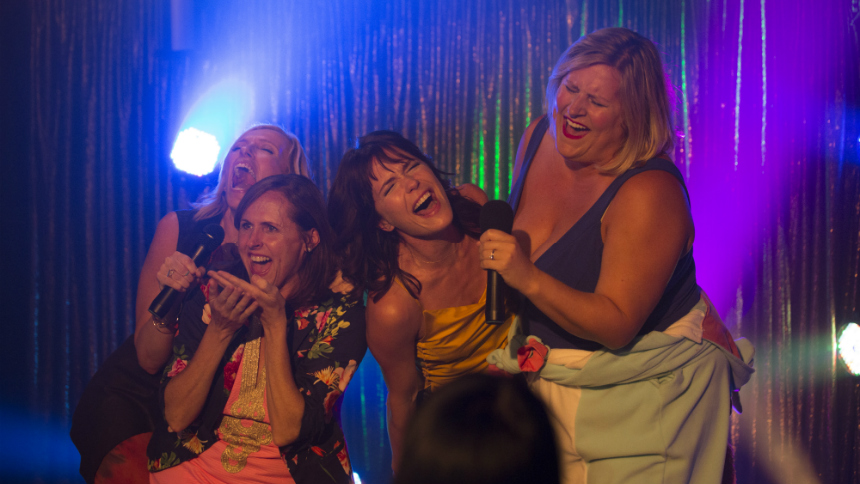 In the wake of Bridesmaids (2011) and its worldwide success at the box office, we've seen a slight uptick in comedies that revolve around women. This summer movie season alone, we've already seen the rowdy Rough Night and Girls Trip, both released by Hollywood studios, as well as Canadian indie Girls' Night Out and ... er ... anything else?

OK, so, not much of a trend, really. Still, the tendency might be for potential (male) viewers to reject another comedy featuring four women in the lead roles. (Although, as noted, it's apparently only the fourth this year.) But that would be a mistake.

A friendly, perceptive comedy, Fun Mom Dinner refreshes familiar characters with acute insight and observational humor. The capable mothers at the heart of the movie are presented as ordinary people, women who have been busy raising their children in a comfortable, safe suburban neighborhood. Not to put too fine a point on it, but they are nice Caucasian ladies who complain about their husbands as they change diapers and chat on their cell phones.

Yet the shared humanity of the women shines through Julie Rudd's original screenplay, displaying sharp edges in the dialogue and pleasant twists in the expected scenarios, and blowing the cobwebs off any possible comic stereotypes. While the mothers deal with poop, kids who act up, and husbands who have only the faintest idea what it is their wives do all day, the actresses always keep one foot in reality, lending needed depth and stability to their characters.

That makes it possible for their later, more layered actions to play in an entirely convincing -- and hilarious -- manner. We feel like we know these women, and it's easy to root for them and laugh with them as they deal with an unusual night, filled with surprises and the possibility of change. 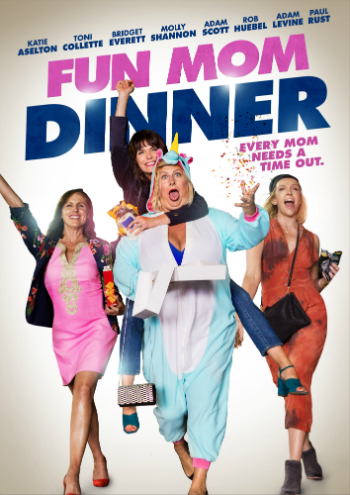 Rudd's script freely distributes jokes and witty asides to a variety of cast members, so that a young girl barging into a bathroom is empowered to make a comic impression, in the manner of Preston Sturges' classic comedies. Under the guidance of Alethea Jones, who made a great comic mark as one of the directors of the gonzo Australian web series Cop Hard and other shows since, the cast walks a fine line between restrained buffoonery and nuanced subtlety, always hitting the right mark.

The mothers are introduced as two pairs of good friends. Emily (Kate Aselton) has recently moved into the area, reuniting with her her high school pal Kate (Toni Collette); Emily is polite and outgoing, while Kate tends to bristle and alienate people. Melanie (Bridget Everett) is brash and outgoing, while her friend Jamie (Molly Shannon) is more reserved; she's also divorced, which makes her more reticent and anxious.

Melanie and Jamie decide to invite Emily to their weekly "fun mom dinner," where they can get away from their families and relax for an evening. Emily, suspecting that the reluctant Kate needs such an evening, tricks her into coming. Though the four women are not immediately compatible as a group, smoking a little "medicine" starts to loosen things up, and soon everyone is relaxed and ready for an adventure to remember.

As modest as it is, Fun Mom Dinner easily delivers the experience promised in its title, and then extends into something beyond that, entirely agreeable and enjoyable.

The film will open in select theaters and On Demand / Digital HD via Momentum Pictures on Friday, August 4.

Do you feel this content is inappropriate or infringes upon your rights? Click here to report it, or see our DMCA policy.
Alethea JonesBridget EverettKatie AseltonMolly ShannonToni Collette