The 1984 TV-movie is better than half the prestige TV in your Netflix queue. 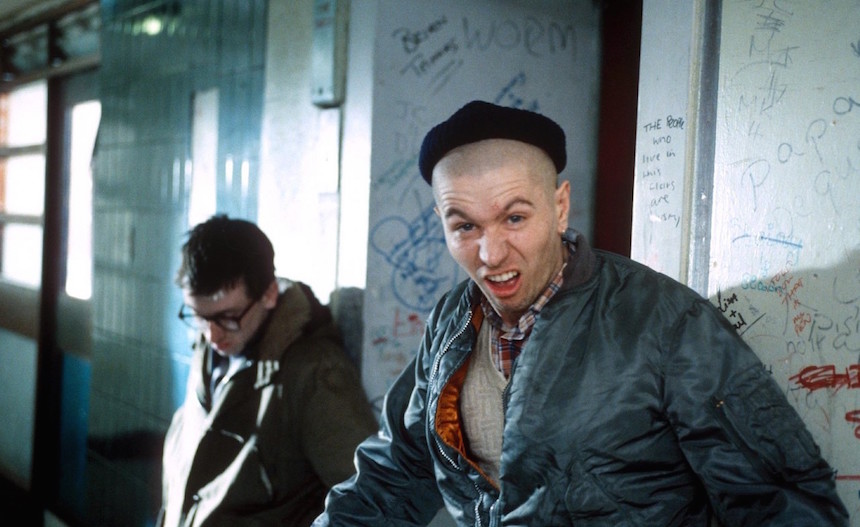 One of many, many, many films I'd never heard of before Criterion sought to add it to their numbers (number 890 in this case), Mike Leigh's 1984 TV movie Meantime comes across as an unintentional political statement. It pulls us back to Thatcher-era Great Britain to spend some of the titular meantime with a poor white family on the dole, a tyranny of circumstances that quietly drives the lot of them nearly insane.

Dad's a layabout malcontent; it's never entirely clear if he's angry about not having work, or at the suggestion that he ought to. Mom's a ceaseless nag with a well-to-do (well, better-to-do) sister to compare her family unfavourably to.

Their sons are Colin (Tim Roth) and Mark (Phil Daniels). Colin might be "slow" (at the very least, he spends most of the movie with his mouth hanging open -- literally slack-jawed), and Mark's just about the angriest person you're ever going to meet. Sarcastic, self-destructive and cruel, Mark brings a skinhead (Gary Oldman) into the family's orbit, introducing a potential lifestyle of hate crime that slowly becomes a power fantasy for his thoroughly un-empowered little brother.

It's an enthralling watch, made all the more interesting by the fact that Meantime was shot for television (a pivotal "Fuck off!" in the third act feels all the more like a gunshot for its medium -- was this sort of thing common on British TV in the '80s?!) and looks disproportionately glorious here on Blu-ray. Granted, I'm a bit of a fanatic for this sort of thing -- chunky, vintage film photography that shows every particle of its thick, irreducible grain structure -- and for the brutalist architecture of London's east end during Thatcher's rule. Even so, the 2K restoration on the Blu-ray is impressive, presented in flawlessly framed 16x9 and quietly allowing fans to dissect Leigh's unobtrusive style. 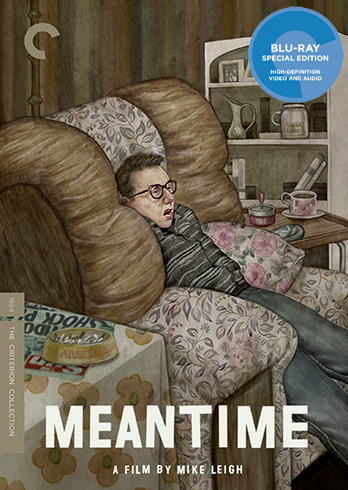 The director brings a stifling claustrophobia to his scenes, stuffing bodies into tight spaces and rooms that were not built for these numbers, and letting us feel it by crowding the frame with halves of legs, portions of torsos, unclaimed ankles.

Closeups are used sparingly, and when they come out during terse exchanges, they tend towards the extreme- side of the XCU, filling frames with chin-to-brow punctuation as emotions inevitably boil over.

Once again the special features on the disc don't live up to the Criterion of yesterday. (Will studios, even boutiques, ever again bother with the feature-length making-of documentary examining all phases of production, as Blu-ray itself becomes a thing of the past? Discuss).

Nonetheless, the essay in the jacket by Sean O'Sullivan is outstanding, picking apart the purpose of a single shot in Meantime and then applying its logic outward to how Leigh both creates and deconstructs the space, class, and time in which his characters live.

New features on the disc include a half-hour interview with Leigh by Jarvis Cocker (but why?), where Leigh both tries to slough off any suggestion that Meantime had a political bent, and simultaneously provide political context for its creation. There's also a delightful interview with Marion Bailey (who plays Auntie Barbara in the film), who speaks with film critic Amy Raphael. An archival video piece from 2007 also revisits the film with Tim Roth, who looks back on how this early role shaped his pre-Reservoir Dogs, pre-Abomination career.