Review: THE FINAL GIRLS (2015), a charming and hilarious satire of 80s slasher movies 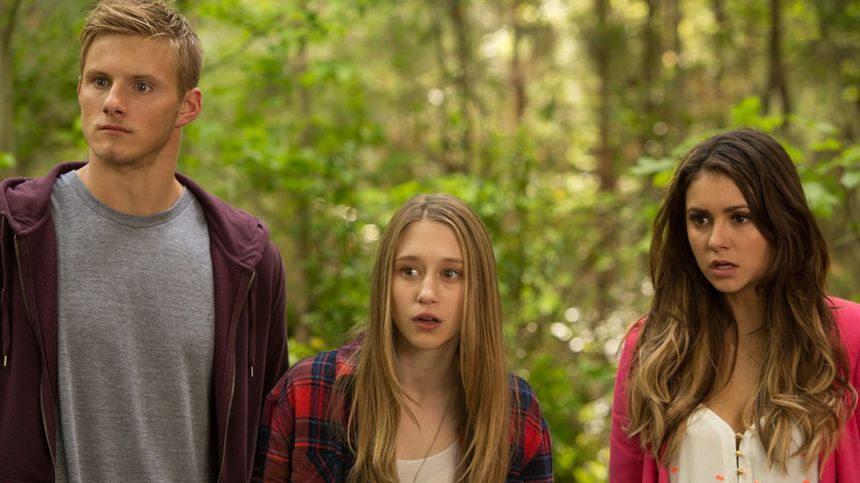 Imagine a mix between the first two Scream movies and Joss Whedon’s The Cabin in the Woods, minus the over-the-top gore; the end result would be something akin to Todd Strauss-Schulson’s The Final Girls. Part deconstruction of 80s slasher movies, and part emotional mother-daughter bonding drama, the film works surprisingly well considering it lacks many of the staples horror flicks such as Friday the 13th were famous for; namely, the blood and nudity. Yes, it’s a PG-13 satire of R-rated movies, which puts a limit on what can and can’t be shown regarding its Jason-Voorhees-like killer, but it also gives it a lighter, more playful tone, which helps differentiate it from the aforementioned films.

Taissa (sister of Vera) Farmiga plays Max Cartwright, a young woman whose mother, Amanda (the ever-beautiful and apparently immortal Malin Akerman), used to be a famous Scream Queen until her untimely death in a car accident, leaving her daughter to live with her aunt, Lady Not-Appearing-in-this-Movie. Amanda’s most famous outing, Camp Bloodbath, is a cult classic, which leads to dorky Duncan (Thomas Middleditch) inviting Max to a special screening of the movie. She begrudgingly accepts, and is accompanied by best friend Gertie (Alia Shawkat, from Arrested Development), her crush, Chris (Alexander Ludwig) and former friend and all-around bitch Vicki (Nina Dobrev).

Things take a turn for the worst when the theatre catches fire, and Max uses a conveniently-abandoned machete to rip a hole in the movie screen to try and escape. And escape they do… but to the film world. It turns out Max and friends are now trapped in Camp Bloodbath-land, and the only way for them to escape is to kill the apparently-invincible Billy Murphy (Dan B. Norris), the aforementioned killer. With the help of the movie’s protagonists, good girl Nancy (Akerman once again), hunky Kurt (Adam Devine), horny airhead Tina (Angela Trimbur), badass Paula (Chloe Bridges) and nerdy Blake (Tory N. Thompson), they set up a trap for our bloodthirsty friend, in hopes that Max can turn into the Final Girl, and rightfully kill off Billy.

DirectorStrauss-Schulson and screenwriters M.A. Fortin and Joshua John Miller are clearly fans of the genre, and thus insert as many in-jokes and references to famous slasher movies as possible. The fake Camp Bloodbath is clearly inspired by Friday the 13th; Billy’s backstory is very similar to Jason Voorhees’, and the roles of the camp counselors are what one would expect from these films. Adult Billy himself looks remarkably like Jason, sporting a mask —although this one looks more like a tribal Crash Bandicoot-style mask, for some reason— and wielding a machete, always ready to kill as many horny “teenagers” as possible, especially those who are about to lose their virginity.

Yes, The Final Girls follows all the expected rules of the slasher genre —teens who have sex are bad, the killer walks with the speed of a tank, and both the fake film’s and the actual film’s protagonists are basically one-note caricatures, portrayed by thirty year-olds trying to look like highschoolers. The exceptions are both Farmiga’s Max and Akerman’s Amanda, who do try to make their characters as three-dimensional as possible, and surprisingly succeed.

That’s because The Final Girls actually has a heart, telling an unexpectedly touching story about the relationship between a girl and her late mother, and said girl’s hopes of a reunion, at least with the fake movie Mom. Her motivations once she meets Nancy are clear; she wants her to survive and come back to the real world with her. It’s something anyone can get behind, and it helps develop Max as a sad, very emotional and real character, as opposed to a walking stereotype. Even Malin Akerman, who I had never personally been sold on as an actress, does a remarkably good job here, portraying Nancy as a naive girl who, little by little, discovers her hidden potential and secret ambitions.

Adam Devine is hilarious as Kurt, a character who, absentmindedly, demonstrates the changes that have taken place regarding what’s socially acceptable in the last thirty years. He’s a sexist, misogynist pig, and his attitudes are pointed out by various characters, including Chris, who’s portrayed effectively by Alexander Ludwig. Nina Dobrev is suitably bitchy as Vicki (although the script does try to humanize her late in the game), Thomas Middleditch’s Duncan is the perfect movie geek, and Alia Shawkat perfectly embodies the role of the “plain”, slightly-snarky best friend.

Strauss-Schulson plays with many “meta” jokes along the way. Our characters actually notice whenever flashbacks take place —something that is used to great effect during the movie’s climax—, subtitles for the fake movie are actually part of the scenery —characters have to avoid stepping on them— and whenever Billy is getting closer, they start hearing his theme music which, once again, sounds suspiciously similar to the famously minimalistic Friday the 13th theme (Did Harry Manfredini get any royalties? Let’s hope so.) It’s all very cute and a lot of fun, especially because Strauss-Schulson knows not to overplay these elements.

Would The Final Girls be a better movie if it included all the blood, gore and breasts many of the movies it’s parodying are so famous for? It certainly would’ve been a more accurate satire, but it also would’ve lost its relatively innocent and goofy tone, making it a more serious, and well, deadly endeavour. This is a fun picture that’s trying to both pay homage and satirize 80s slashers, without making fun or being mean to them. Strauss-Schulson and company are fans of these films, and thus aren’t trying to criticize them. Pointing out and recreating horror movie tropes with their tongues firmly planted on their cheeks is what they seem to want, and since they’re doing it in such a charming and creative way, it’s also more than enough.

By the way, Todd Strauss-Schulson is currently filming Isn’t It Romantic, a movie in which a young woman gets trapped inside a romantic comedy. Hopefully it’ll turn out as entertaining and delightful as The Final Girls, without feeling like a retread.