Twenty groups came with the hope of securing co-production partnerships here in North America and in Europe. As always,what I like to do each year is pick five standouts from the crowd. They could be standouts for any number of reasons, but however they made an impression these five selections made the grade. There were other projects that would make some kind of honorable mention list as well but we will stick with the big five.
What everyone is looking for are the three fundamentals; financing, co-production and sales. The budgets requests were more reasonable this year. Nothing nearing double digits, the budgets were set mostly around the 1 to 2 million mark, if all our currencies were on par. But no outrageous amounts this year that made the room collectively suck air through their teeth.
This year’s pitch sessions were dedicated to the memory of George A. Romero and the team behind George A. Romero’s Road of the Dead, director/writer/producer Matt Birman and producer Matt Manjourides, were granted the opening spot to present their project.
As always, there are lessons to be learned and things to be said about this year’s selections. Anyone can earn points for presentation but communicating your ideas is key. Coming prepared, well rehearsed and confident helps. There always seems to be the one poor soul who gets stuck each year making the presentation because the key person was delayed, held back or hospitalized before coming over to Montreal. We salute you, lone producer.
The real trick is getting those people to talk to you in the sit-downs that will happen the rest of the weekend. Like Dragon’s Den or Shark Tank or whatever those type of shows are called these days, no one is going to invest their time or money in you if you don’t have something they want. Maybe you do but if your enthusiasm for your project is not contagious? Well then.
Are we past the point where mood reels work? Demo reels I understand, you have previous work you can show off but mood reels tell your audience that you are a pretty nifty editor. I know one filmmaker in this year’s lineup has three POC/Short films out there right now for three projects they would like to see get made. Three. They wanted to show what they can do, not what they can do that someone else has already done. So they went out and they did it. Three times. Maybe I’m just being ignorant to the process but if you are going to market yourself you have to be ready to show what you can do, limitations and all. Are we not at the Steve Austin age of filmmaking by now? We have the technology, we can film it? Cameras on our phones and a plethora of filmmaking related software programs on our computers.
Rant over, I present to you five pitches that stood out for one reason of another from this year’s Pitch Sessions back on Thursday. 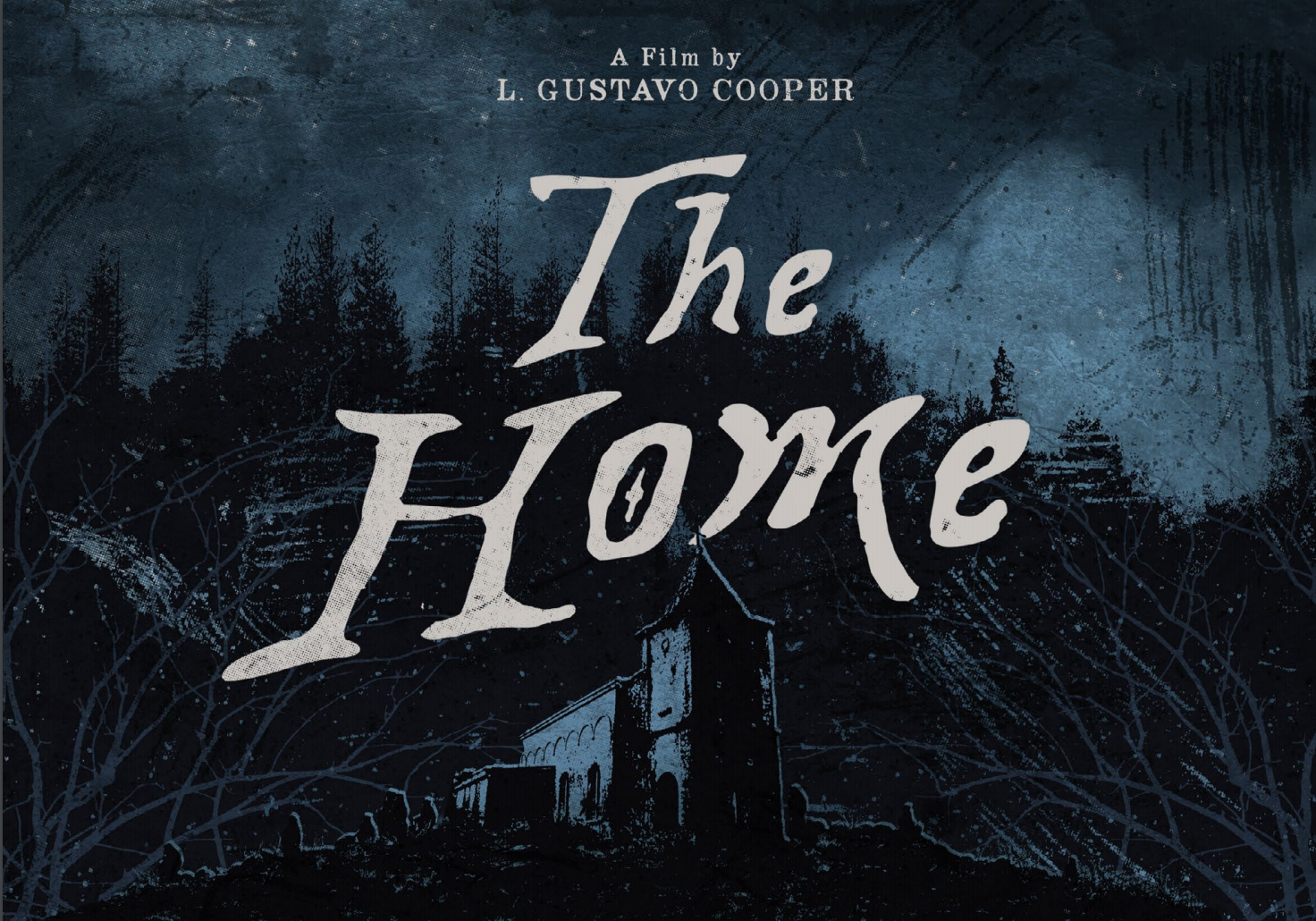 The Home - I said before that I will run close to being biased here because Screen Anarchy and I have been following L Gustavo Cooper’s project The Home for over a year now. Cooper has been working on the horror flick about unwed mothers in a group home where strange murder elevate the situation for a while now. It was around this time last year that he had begun sharing a proof of concept with his friends and some of us said, “Slap some credits on that and get it out there”. That Fall, Cooper and his writer Peter Cilella made their first pitch at a co-pro market in Austin. This past Winter Shudder began streaming that short on their service.

This Summer The Home came to Montreal with Glass Eye Pix’s Peter Phok and Alix Taylor (The Hills Have Eyes and In A Valley of Violence) backing up the gents with their production clout. The presentation was solid. Peter and Alix pledged their support for the lads. Cillela gave a quick run down of the synopsis and Cooper shared his personal attachment to his project then we watched a concise version of his proof of concept.

There is just a lot to like about The Home. The main characters will be mostly female. There will be a creature feature element to it. I know for a fact that Cooper has drawn inspiration from one of the great sci-fi action films when he was building the relationship dynamic between some of the characters. The story itself came out of real life events that have been noted on in previous articles related to the short and this project. 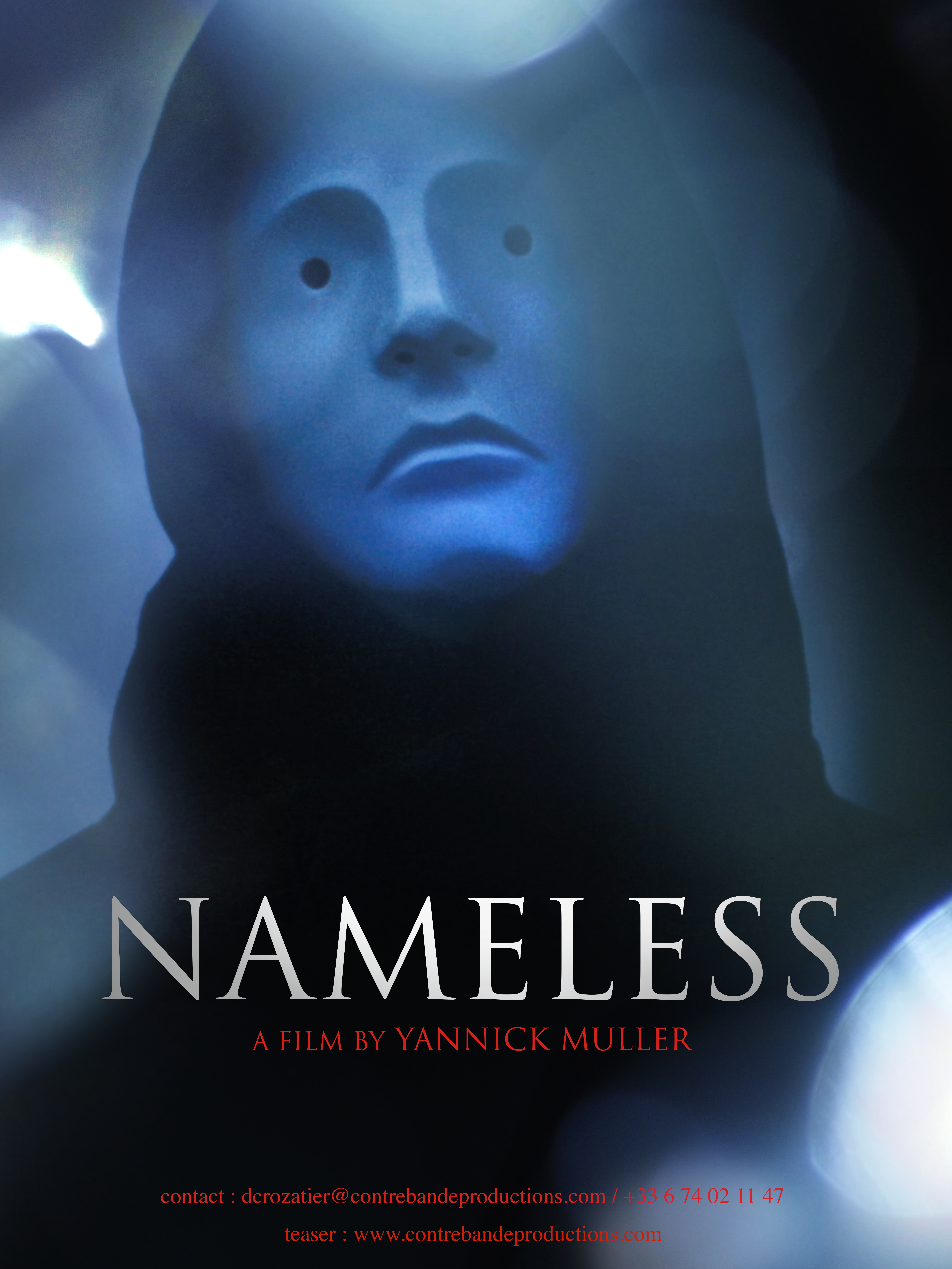 The Nameless - This French and Belgian production caught my eye that morning. Chief reasons among them is that director Yannick Muller made a killer proof of concept to show the group. It opened with French actress Jenna Thiam (The Returned) sitting in her car watching a demonstration pass her by. Noticeably irked from being held up by the crowd she leans on her horn and a tall man in a passive white mask slams her window. He then moves to the front of car and hops all over the hood of her car. She taps the gas pedal but he refuses to move. When she give it more gas he disappears in front of the car and she runs him over. Everything stops and everyone turns and faces her car. Then there is a jump scare and everyone rushed the car. Thiam floors it and bloody hands continue to swipe at her car leaving blood streaked across the windows. Then there is a blackout, a crash, and fade in to the killer leaning over someone. The car is behind him almost off the road, he stands up and turns to the camera in a kind of loll. It certainly caught everyone’s attention.

Muller is looking to introduce a new slasher franchise to the world, His first attempt at it will bring together two groups of young people: a group of activists stranded by a car accident and a group of MBA students who gathered at a secluded mansion for the weekend. We were told that at first the two groups will not get along but as soon as things settle down and they begin to get along a masked killer will start to pick them off one by one. The story will be told from three separate point of views.

We are due for a proper psycho slasher film/franchise again. Perhaps Muller’s flick is the one to revitalize the sub genre again. The project came to the festival looking for a co-production partnership and financing. They are aiming for a winter shoot in Belgium because of a sizable tax credit there. Jenna Thiam signed a letter of intent along with actor Jonas Bloquet (Elle and 3 Days to Kill). 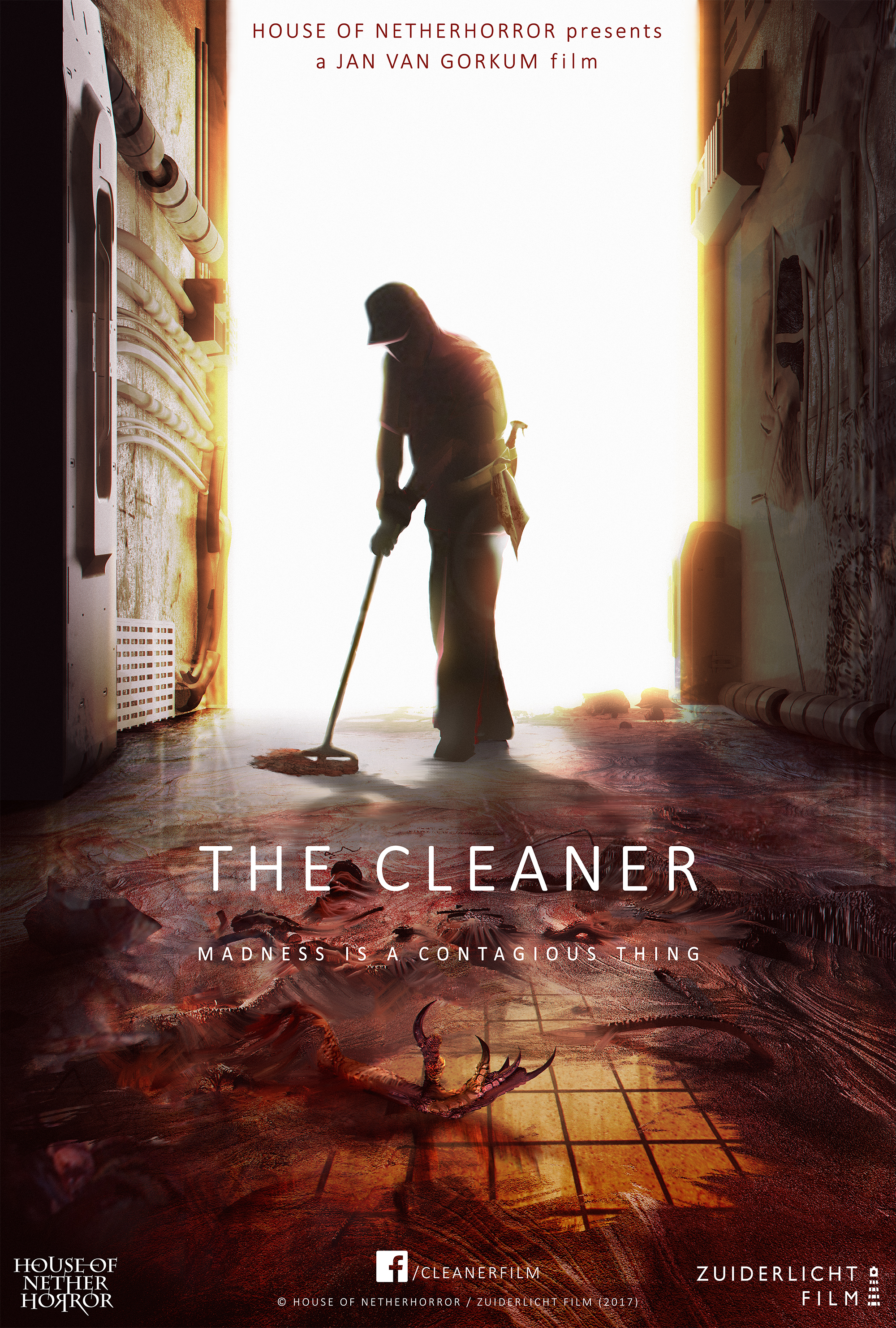 The Cleaner - One of the trends to emerge out of the rash of superhero films these past years was to calculate the costs of destruction that were beset on the cities our heroes and villains fought in. This Summer’s web-slinging hit followed on the heels of the climactic battle in New York in the first Avengers film with the clean up crews. So with this trend emerging from that sub-genre why has it taken this long for someone in the horror genre to wonder what happens to the corpses and awful left behind by monsters and other creatures of the unknown?

In the Dutch production The Cleaner, a dark comedy and horror flick, the central character Barry, a middle-aged unemployed construction worker, discovers that there are monsters living among us. He also discovers that there is an agency hired to clean up after any events and he signs up.

The production already have a win under their belt, winning a pitch session at a genre festival in Europe. And though they have only finished the first draft of their film under the tutelage at the House of Netherhorror the production came to Montreal looking for Financing and International Co-production partners.

What caught my eye was the near-uniqueness of the idea (knowing full well that friends back in Toronto are developing a television series that is the same idea) which could breed some terrific gore moments and by all accounts the Dutch have a terrific sense of humor as well. Writer/director Jan Van Gorkum also said during his pitch that wants to do most of the effects in shot, which is of course music to any genre nuts’ ears. 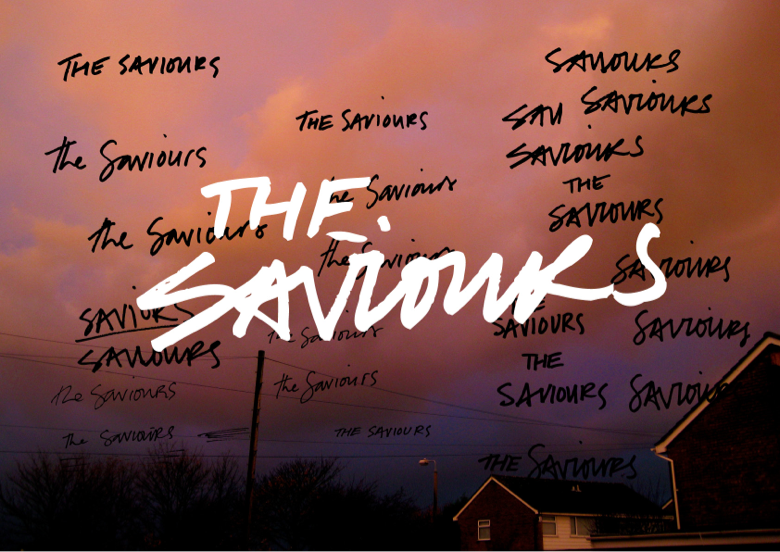 The Saviours - Perhaps it was not the best pitch of the bunch. Instead of selling her idea writer/director Rosie Toner tried to sell her skillset at the start, talking about what she does in the arts and such. However, she wins points for audience participation, when she got around to explaining the inspiration for her project she got the cinematic equivalent of a responsive reading from the audience.

Apart from that though there is also something really terrific about her proposed suburban horror flick, The Saviours. A socially ostracized schoolgirl struggles to find her way until a new girl moves to town and becomes her friend. More importantly the new girl is convinced that she is a messiah and a cult of only girls forms around her.

Taken from the project write up in the market guide Toner’s film will explore the ‘world of the teenage girl and their vulnerabilities as they look for their place in their peer group’. With so many cults being led by men I am very interested to see what Toner’s all girl cult looks like; made up of “independent female characters who offer no real explanation or apologies for their actions’. 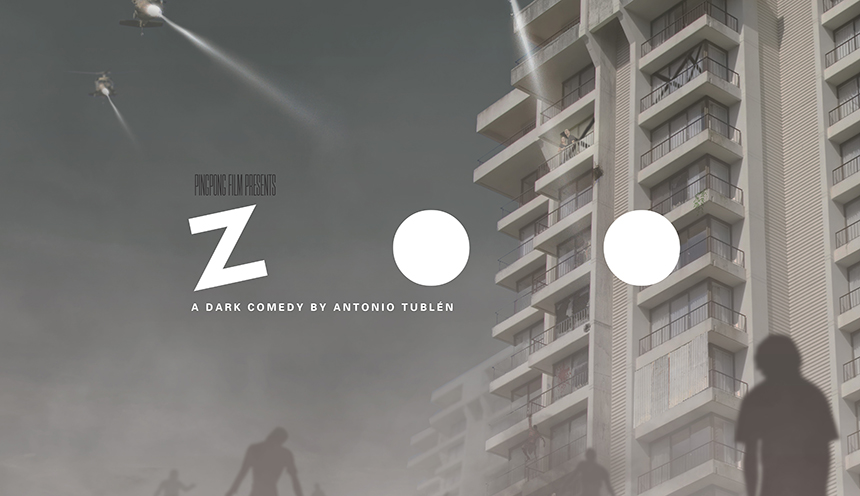 Zoo - Perhaps no one was expecting to see such a low amount requested for financing for a project this year. Coming in at the low end, having worked towards securing a lot of financing ahead of the market, Zoo's writer/director Antonio Tublen and producer Alexander Bronstead were asking for a measly 500k. And the pair having already established their cred with festival hit LFO the other year I swear I could hear check books opening between the gasps uttered when they said that was the correct amount.

So what is Zoo? Their next film, a dark comedy, would take place during a zombie apocalypse. A couple is forced to stay in their high rise apartment. Trouble is not only the zombies outside but that their marriage is in jeopardy because they are having trouble conceiving a child. While the zombie horde looms outside there are other threats that exist in militia groups and the military too. The married couple fight to stay alive as civilization crumbles around them, and they must fight to save their marriage.

The filmmakers had already secured about three quarters of their budget before coming to Montreal and the beauty about keeping the story limited to just one space, their apartment, is that it doesn't require a lot of money to stay in one spot. When you think of it, it is a chamber film slash dark comedy. Other than a snappy intro video they did not have much to show the group that morning but going on the merits and critical success of their debut LFO I really want to see what this duo can do next.