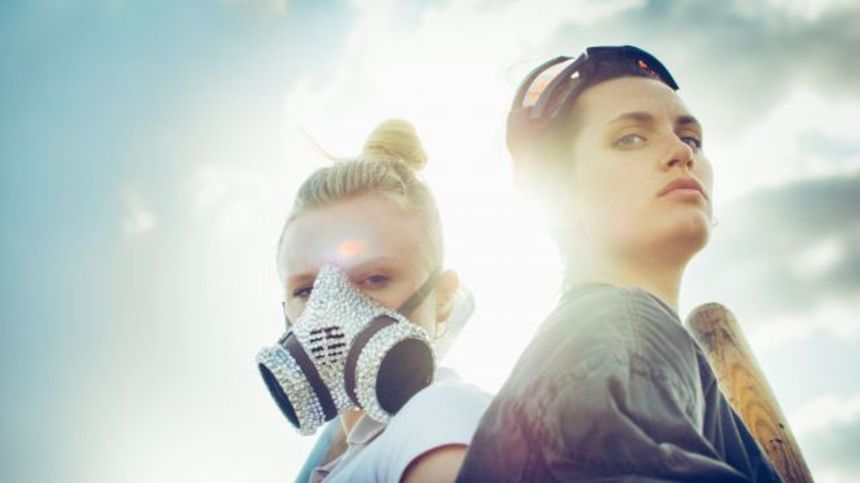 Movies love bad girls. Lashing out against the patriarchal establishment, kicking men to the curb, fighting for their right to existence. Put this in hand with youthful rebellion, and watch these women soar, sometimes (though not always) with a moral imperitive or point. Jakob Lass' Tiger Girl gives us two such bad girls, somewhat aimless, revelling in their youth and power, with little regard for the consequences.

Vanilla (Maria-Victoria Dragus) has flunked the police academy exam, and takes a job as a security guard. In the midst of a very bad day, she encounters Tiger (Ella Rumpf), a parking lot attendant and badass. Later that day, Tiger rescues Vanilla from a guy who is trying to force her home with him, and the girls become fast friends. Tiger shows Vanilla how to stand up for herself, how to party, how to get back at men who have treated thyem badly. But Vanilla may be taking her new attitude a bit too far, even for Tiger.

Mixing script work and improvisation, with a handheld camera, Lass follows Vanilla as she learns from Tiger. In this underbelly of Berlin, youth with little or no employment drink, sleep, maybe work as small time drug dealers, and have a lot of pent-up rage. When Tiger lashes out, it's with purpose: she'll kick the sideview mirror of the car of the woman who stole a parking spot, or guys illegally smoking in the park. Tiger will resort to some petty crime, such as pickpocketing, shoplifting or pretending to be a security guard to stripsearch and mug people, but she does this for love of her boyfriend, to maintain his existence, and even then, she's still in charge of the relationship.

It's refreshing to find a film such as this that reverses gender roles in more ways than one. Tiger and Vanilla are complex, strange, and often terrible people, but still likeable; the male characters are little more than accesories (and it is they that are often seen naked, as oppose to the women). The violence they purpotrate (at least at first) has a purpose, but they are still just shitty young people trying to find an outlet for their rage and disenfranchisement.

But as Vanilla becomes more confortable with her newfound, badass attitude, she takes things too far. Rather than fighting when wronged, she fights for the fun of it, hurting people that don't deserve it, just because she can. At this point, Lass moves less from Vanilla's perspective to more of Tiger's, as even Tiger knows when to draw the line on violence. Lass leaves the audience (and his characters) little room to breath, keeping the adrenaline pumping, like those in his films who act before they think.

Tiger Girl might have some predictability to its story in terms of direction, but the ending is a nice surprise, giving the girls the leeway they arguably deserve in a world that still looks down more on women who misbehave. It's certainly an anthem to the marginalized youth of Europe, who are given little hope for a reasonable life, and women who need to kick ass if they are going to survive.

Do you feel this content is inappropriate or infringes upon your rights? Click here to report it, or see our DMCA policy.
Ella RumpfFantasia 2017Jakob LassMaria-Victoria DragusTiger Girl