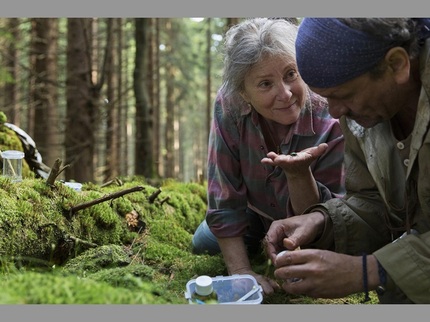 Polish filmmaker Agnieszka Holland, with more than 20 feature films and dozens of television episodes on her CV, has said that her latest film Spoor should be called 'No Country for Old Women'. While I understand the analogy, with much due respect to her, I beg to differ.

Instead, I would call it 'Every Country for Old Women', as we need more of her wonderful main character, and indeed, more of Holland's perspective, in our lives. Part thriller, part magical realism, Spoor weaves a strange tale, hiding a beast of a heart under its seemingly straightforward murder-mystery story.

Duszejko (played with complete conviction and ferocity by Agnieszka Mandat-Grabka) is a retired engineer and part-time schoolteacher, living in a small town on the Polish-Czech border. A great lover of animals, she becomes distressed when her beloved dogs (her 'daughters') go missing. Not long after, members of the local hunting club begin turning up dead one by one, seemingly murdered by the animals they (illegally) hunted. Duszejko begins her own clandestine investigation, aided by other misfits of the town.

Holland takes her time with the story, taking us on this journey through its subtle twists and turns. Framing it month by month via a hunting calendar (showing us when certain animals can be legally killed), Duszejko is a warrior for animals: the police wearily put up with her rantings and crime theories (not as far-fetched as they might think, even if she discusses astrology); she takes her young students out after dark to look for her lost dogs; she takes a visiting entomologist as a lover, reading philosophy  into his discoveries; all the while, the bodies pile up, with only animal tracks as evidence.

On the side, Duszejko has her lover, and acts as intermediary/matchmaker between a local girl trapped by poverty, indebted to a local business owner, and a young computer whiz, hiding his epilepsy working for the police department. These tales (perhaps an influence from Holland's time working in television) weave around this Fargo-esque town, and Holland takes us on this journey to fully understand the world and motivation of her main character. This is still a community run by men with money, who, in the end, care not for anything that they cannot buy or take. Duszejko's fight is motivated a fierce love and moral fortitude that they could never comprehend.

Cinematographers Jolanta Dylewska and Rafal Paradowski capture the landscape in richness and strangeness; the sparse beauty of winter, the rich life of summer, still hint more than a little at the wildness found even a few feet from civilization. Add to this a haunting score that elicits an ancient magic, and Holland seems to be evoking a call from an ancient, matriarchal goddess to fight against the machismo that has invaded and seeks to control/kill the natural world.

A murder-mystery, a dark comedy, and an eco-thriller rolled into one, Spoor is a deceptively subversive film, shot with minimalist precision. Holland has crafted a haunting, elegant, and perfectly strange tale of class and gender struggle, animals rights, and the dark power of nature.

Do you feel this content is inappropriate or infringes upon your rights? Click here to report it, or see our DMCA policy.
Agnieszka HollandAgnieszka Mandat-GrabkaFantasia 2017Spoor