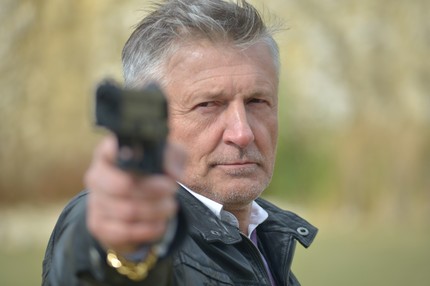 Since the split of Czechoslovakia, Slovak cinema has lived somewhat in the shadow of the better funded Czech industry but director Peter Bebjak may very well be drawing some international attention with upcoming Slovak crime thriller The Line (Ciara). Soon to premiere at the Karlovy Vary International Film Festival, the tense thriller is pitched by the festival like this:

Adam Krajňák is head of the family and also boss of a gang of criminals smuggling cigarettes across the Slovak-Ukrainian border. In this close circle he plays the vital role of the confidant who takes care of everything, and also the principled and uncompromising leader whose self-assurance and temperament serve him well in decisive moments. The peaceful coexistence of these interconnected worlds, however, is threatened by increasing anxiety about the future after the construction of the external Schengen Area border. The failure of one of the illegal transports triggers an unstoppable avalanche of consequences that compels Krajňák to question his own boundaries, none of which he had planned on crossing until now. Peter Bebjak’s direction introduces an infectious spark into his thriller crime story, ensuring it a status far removed from mere genre entertainment. The result is a universal human tale set in an environment that draws together different cultures, customs and destinies.

A first trailer for The Line has arrived online one that starts deadly serious before injecting a surprising dose of black humor that makes for a compelling blend. Take a look below!