Tribeca 2017 Review: THE LOVERS, Break Up To Make Up, That's All They Do 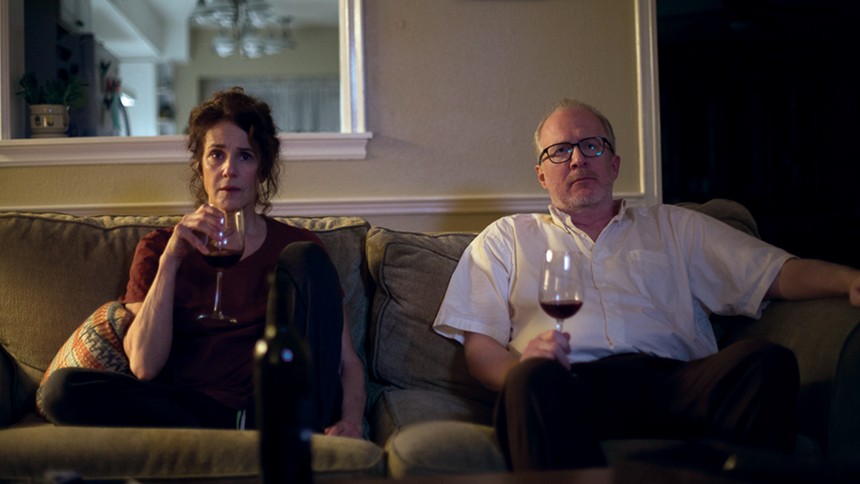 Azazel Jacobs is a young filmmaker who’s continuing a family tradition. His father is avant-garde cinema legend Ken Jacobs, and his mother Flo and sister Nisi are also participants, all of them having worked on each other’s films. (Ken and Flo played the protagonist’s parents in Azazel’s 2008 feature Momma’s Man.) Azazel Jacobs makes films of a very different sort than his father’s, opting to work in a more commercially oriented, narrative realm, albeit in lower-budgeted independent features rather than in studio films.

However, Jacobs is, in a way, also an experimental filmmaker, finding novel approaches and uniquely observational angles to familiar-seeming scenarios. Momma’s Man comically mined the pathos existing beneath the developmentally arrested, man-child characters of the sort often played in other films by Seth Rogen or Will Ferrell, while Terri was a wonderfully nuanced and richly textured take on the teen movie.

Jacobs’ latest film The Lovers also has a familiar starting point. A middle-aged married couple, living in an anonymously banal suburban landscape, are currently withering away in the doldrums of a staid, stultifying relationship. Michael (Tracy Letts) and Mary (Debra Winger), the couple in question, have both turned to other partners for escape from their lives of mutual quiet desperation. Michael is having an affair with Lucy (Melora Walters), a ballet instructor, while Mary is seeing Robert (Aiden Gillen), a novelist; both these relationships are apparently long-term ones existing outside the marriage.

Michael and Mary appear to have an unspoken mutual understanding regarding their affairs, which provide the passion and excitement that has been long absent from their marriage. However, their paramours have grown weary of being their respective partners’ side pieces, and Michael and Mary have been under pressure from both sides to leave the marriage and remain with their lovers full-time. The impending arrival of their son Joel (Tyler Ross), visiting on a college break along with his girlfriend Erin (Jessica Sula), is Michael and Mary’s planned opportunity to finally announce that they’re dropping the charade and finally putting an end to their broken marriage.

Then, a very weird thing happens, throwing a monkey wrench into their break-up plans. After waking up together one morning and then looking at one another, a mysterious emotional alchemy occurs, and they begin falling in love with each other again. Right away, they impulsively make love, and soon they’re texting and meeting each other on the sly. In effect, they’re cheating on the people they’re having affairs with, turning the idea of infidelity completely on its head.

Joel’s arrival is the cause of much of the drama in the latter passages of the film. Joel has long resented his parents for continuing with a marriage in which neither of them are happy, turning him into an emotional wreck in the process. This, along with the suspicions, and attendant ultimatums, from Michael and Mary's lovers, especially from the emotionally unstable Lucy, causes confrontations with the potential to do irreparable damage to the relationships of everyone involved.

Jacobs has made a major leap of formal beauty and penetrating character study with The Lovers. While his previous films were pleasurable examples of what one would expect from a young director, the emotional maturity evident in this new work greatly belies Jacobs’ youth. His screenplay contains quite elegant, if at times overly neat, narrative symmetry: for example, while Michael and Mary work as office drones in sterile corporate environments, their respective lovers are creative people, emotional sorts who wear their hearts on their sleeves. The couple’s affairs can be seen as their way to relive their youthful bohemian days, before conventional suburban family life swallowed them whole.

Visually and aurally, Jacobs’ makes great use of empty spaces and silence, the sterile backgrounds of Michael and Mary's home and office settings providing a counterpoint to the passions and messy complications of the characters that dwell within them. Jacobs is also greatly aided by the lush, waltz-like orchestral score by Mandy Hoffman, which also lends grand romantic strains to the comic romantic complications.

However, what elevates The Lovers into something truly special are the brilliant, riveting performances by Debra Winger and Tracy Letts. Winger, an iconic actress of the 1980’s who hasn’t been seen on movie screens very much lately, reminds us what a wonderfully subtle and skilled actress she is, while Letts, a Pulitzer Prize-winning playwright-actor, steps up to the plate in his first major lead role. Winger gives a beautifully lived-in portrayal of a woman constantly in search of passion but having trouble finding it, while Letts manages to convey sympathy for a character who often seems remarkably tone-deaf to how his actions affect others around him.

All these elements, crowned with an ambiguously happy (or at least contentedly settled) ending, makes The Lovers a truly unique viewing experience belying the generic nature of its title.

The Lovers had its world premiere at the Tribeca Film Festival, and is in theaters now.

Do you feel this content is inappropriate or infringes upon your rights? Click here to report it, or see our DMCA policy.
Azazel JacobsDebra WingerThe LoversTracy LettsTribeca 2017