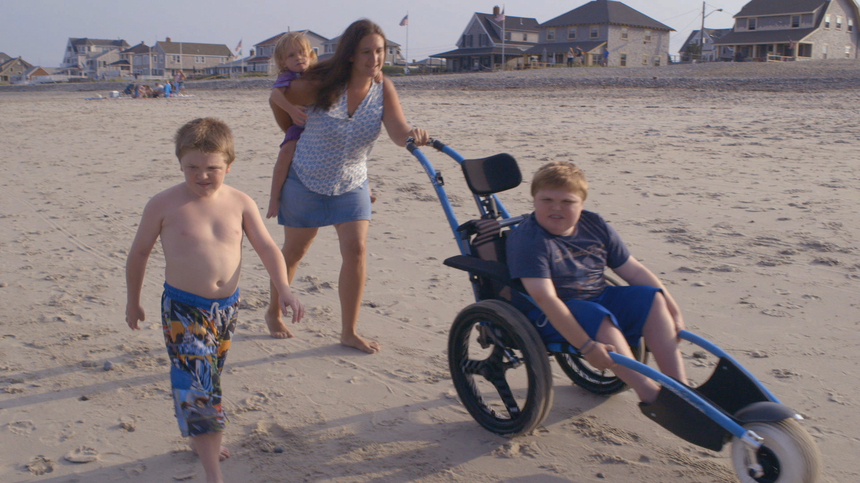 EXCEPTIONAL PREMIERES AND FILMS BY WOMEN DIRECTORS HIGHLIGHT THE FEST

May 31, 2017, Stony Brook, NY – A highly selective slate of new independent films will screen at the 22nd Annual Stony Brook Film Festival presented by Island Federal Credit Union, July 20-29, held at Staller Center for the Arts at Stony Brook University. Many filmmakers are expected to attend throughout the Festival to represent their films at screenings and Q&As.

Alan Inkles, Stony Brook’s founder and director, notes, “U.S. Premieres from Germany open and close the Festival. Both are entertaining and timely, and were chosen for their ability to bring in the widest possible audience since they are definite crowd pleasers. The Opening Night feature, Welcome to Germany, (Willkommen bei den Hartmanns), from Picture Tree International, is a delightful comedy about politics, cultural identity, xenophobia and family issues. Closing Night’s feature, Text for You (SMS für Dich) is a romantic comedy directed, co-written and starring Karoline Herfurth, (Berlin ‘36, The Reader). From Beta Cinema, Text for You is about loss and finding love again. It’s the perfect film to end our ten day run.”

Film passes are now on sale for $85, which includes twenty features and sixteen shorts over ten days. Each film is treated as a special event, with films shown on one of the region’s biggest screens in the Staller Center’s 1000-seat Main Stage theatre. Single tickets become available on July 5. The complete schedule is online at stonybrookfilmfestival.com.

In addition to Karoline Herfurth’s Text for You, a notable number of films in the Stony Brook line up are by women filmmakers. Catherine Eaton of The Sounding is director, co-writer, producer, and the central actor in the drama from Corsetless Productions. The Sounding is a unique story about a woman who has chosen to remain silent for years and who suddenly begins to speak using only the words of Shakespeare.

Other women filmmakers whose work will be screened include Love is Thicker Than Water from Mulholland Pictures, co-directed by Emily Harris (with Ate de Jong), Menemsha Films’ Fanny’s Journey by Lola Doillon, director and co-writer, based on a true story of children escaping Nazis. Tonio is directed by Paula van der Oest, and was the Netherlands’ foreign-language Oscar submission this year, coming to Stony Brook from Dutch Features Global Entertainment.  Others from women filmmakers are Media Luna Films Little Wing by Selma Vilhunen, and From the Land of the Moon, directed and co-written by Nicole Garcia from IFC Films. The documentary Purple Dreams by director Joanne Hock, along with producer, Robin Gray, a 1977 Stony Brook University alum, explores the story of the first high school permitted to perform the musical The Color Purple. The documentary comes to Stony Brook from GreyHawk Films.

Shorts by female filmmakers include Speak by director, writer, actress Laura Seay. Game by Jeannie Donohoe; Snowgirl by Ilina Perianova; Who Sank Your Ships? by Ella Kohn; Oma by Daniella Rabbani, Real Artists by Cameo Wood, and Interrogation by YueCheng Liu are all films by women.

The Stony Brook Film Festival is presenting the World Premiere of To the Edge of the Sky, a riveting U.S. documentary directed by Long Island brothers Todd Wider and Jedd Wider known for their docs Client 9, and God Knows Where I Am. Todd and Jedd Wider were producers of the Academy Award winning film, Taxi to the Dark Side.

To the Edge of the Sky follows four families as they fight the FDA to gain access to a potentially lifesaving drug for Duchenne Muscular Dystrophy, a fatal disease the families’ sons suffer from and the number one genetic killer of boys in the world. The film focuses on the transformation of the mothers of four boys into "the rogue moms" as they become political activists during their righteous battle against time and the FDA. A Wider Film Projects film, it screens on Sunday, July 23 at 4:00 pm. To the Edge of the Sky will be preceded by a World Premiere of the short film Brothers by Zachary Fuhrer, also a Long Island filmmaker with roots in the community.

Stony Brook Film Festival is also presenting the U.S. Premiere of the documentary, The Second Act of Elliott Murphy. Originally from Rockville Centre, Murphy was an up-and- coming singer/songwriter who left for Paris three decades ago and who has become one of the most well known American rockers to tour regularly throughout Europe. The Second Act of Elliott Murphy follows his life on the road and includes interviews with Billy Joel and Bruce Springsteen, who both count themselves among his fans.

In addition to coming to the Stony Brook Film Festival and representing the documentary about his life and career, Elliott Murphy plans on playing a few tunes after his Q&A.

Indies from around the world

In addition to films from 19 foreign countries, the 22nd Annual Stony Brook Film Festival presented by Island Federal Credit Union has more American Independent features and shorts this year than ever before. 15,000 tickets are expected to be sold this summer. For a full listing of films and the complete schedule, visit stonybrookfilmfestival.com.

Do you feel this content is inappropriate or infringes upon your rights? Click here to report it, or see our DMCA policy.
Catherine EatondocumentaryStony Brook Film FestivalText for YouThe Second Act of Elliott MurphyWider Brothersworld premiere