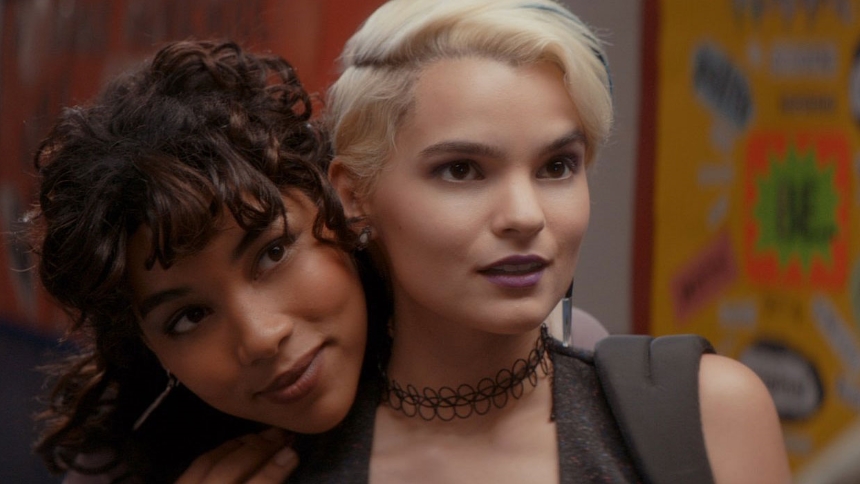 The horror genre is one of the most forgiving there is. Fanatics regularly overlook low-budgets, no-name actors, questionable performances, and mediocre writing if a film delivers the kind of thrills that turn them on. The horror-comedy, however, is a far more fickle beast. For every successful film, there are a few dozen that weren't able to balance the seemingly disparate tones effectively. However, when the balance is right, these films are fantastic fun to watch, and Tyler MacIntyre's new social media slasher Tragedy Girls is one of the best in recent memory.

Makayla and Sadie are the titular Tragedy Girls, a pair of high school seniors obsessed with their social media presence as the foremost authority on local crime, but with a twist. Their interest in murder and mayhem is more than just academic, they are the hands on types. When they trap a local serial killer in order to foster what they see as a mutually beneficial partnership, they begin to see their profile rise, along with the rise in brutal slayings in their small town. Can their friendship stand the strain of national stardom? Will their captive partner play along? Who will be the prom queen? So many questions, and the answers are invariably exciting and hilarious.

As a man twenty years removed from walking the halls of my own high school as a student, I wasn't entirely sure I would be able to relate to these characters who are of a completely different generation. The obsession with social media profiles, and the associated, almost compulsory narcissism that affects a lot of kids these days is a constant source of irritation. It's hard to turn on the news these days without some kind of viral video popping up, it's almost impossibleto visit any public place without running into a dozen people taking selfies of themselves to push out in the the world as a constant reminder to their followers that they are having more fun than you. However, Tragedy Girls manages to make these characters relatable, almost likeable, in spite of their outsized egos and predilection for carnage.

All of the annoying little tics of modern day teens - the constant preening, the obsession with an online presence - are skewered in a way that manages to both make them relateable and understandable. Makayla and Sadie are real teens, as comically outsized as their appearances may be, their actions are bothing I haven't seen a hundred times before from the kids I come into contact with these days. In an age where the internet magnifies every speck of controversy, terror, or minor celebrity to outsized proportions, Tragedy Girls gets inside the mind of the beast doing the magnifying, and it's an enlightening experience for those of us beginning to feel out of touch.

Among the best horror comedies of the last decade, I'd easily put Tragedy Girls alongside films like Tucker and Dale Vs. Evil as an example of the genre done pitch-perfect. Director Tyler MacIntyre deserves to graduate to the big leagues based on this film, and I hope some distributor does the right thing and gives this film the exposure it derserves. All I know is that this was the best movie I saw at SXSW this year, and I can't wait to see what the world thinks of it.

Do you feel this content is inappropriate or infringes upon your rights? Click here to report it, or see our DMCA policy.
alexandra shippbrianna hildebrandSXSW 2017tyler macintyre