Actress and filmmaker Leandra Leal fixes her documentary eye on eight iconic performers from the first generation of transvestite artists in Brazil. 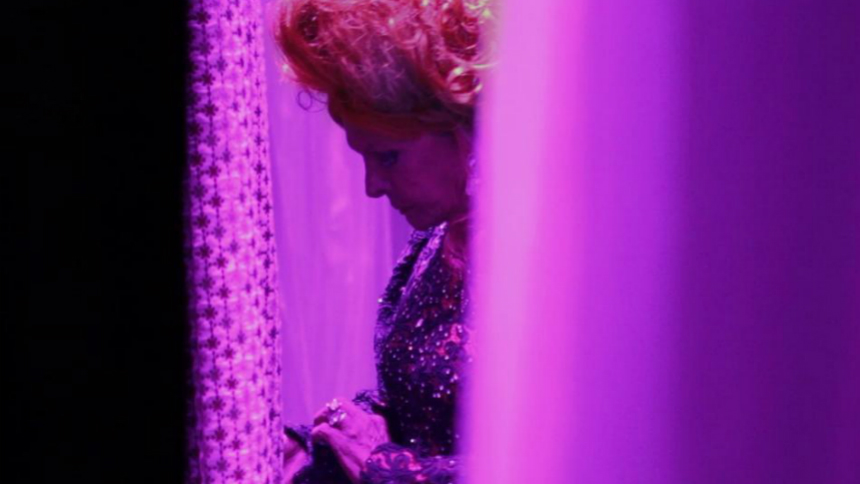 Vibrant and enlightening, Divine Divas peeks behind the curtains of the Rival Theatre in Brazil, which was one of the first in the country to showcase men dressed as women in the 1960s. Eight artists have gathered for a 50th anniversary reunion and their stories are as varied as their costumes.

The documentary is greatly influenced by the experiences of the filmmaker. Leandra Leal practically grew up at the theater; her grandfather, Américo Leal, owned it and presented that first showcase for transvestite performers.

Her mother, Angela Leal, brought her to the theater from an early age, and so she was greatly influenced by the warm and loving environment she found there. Because her mother was an actress, it felt entirely natural for her to also become an actress, which she did in her early teens, to great acclaim.

Given that background, it's no surprise that Divine Divas is more a celebration than an expose of some sort. But what a celebration! Thanks, no doubt, to her friendly relationships with the performers, they open up to her right away. In their frank recollections, there is pride, yes, as is true for any other accomplished performer.

Yet beyond their musical talents and strong stage presence, there is also a recognition of the many unique challenges they faced over the years. None of them seek pity; they just tell it like it is, and describe how difficult it was for them individually in their younger years, when some struggled to figure out their own identity at a time and in a culture that frowned upon anything or anyone out of the ordinary and expected.

As a filmmaker, Leal structures the film around preparations for the reunion, which gives the artists a natural forum to talk about their experiences over the decades. Each individual is different, of course, and so a broad view of identity issues is related.

A fabulous overview of Brazil's culture, especially in the 1960s and 1970s, helps to put things in context for those of us outside the country, and archival footage and photos give a taste of what life was like for the performers. Occasionally the footage is quite revealing, but even when private parts are exposed briefly, the spirit remains accepting and matter of fact; this is what people came to see and it's a part of life for consenting adults, anyway.

Divine Divas can't help but be generous-eyed toward the artists, yet the attitude is well-deserved. The times have changed; the artists, even in advanced age, have not. They are still strong, resilient and proud. And they can still sing, dance, entertain audiences, and serve as examples to younger performers.

The film enjoyed its North American Premiere at SXSW.