SXSW 2017 Dispatch: Great Crime Films, Both Big and Small Late night booze-fueled taco runs be damned, the SXSW train just keeps chugging along. There have been an ridiculous number of great moves in this year's program, many of which, it seems, revolve around the theme of crime (or at least have the word "crime" in the title). Always a compelling subject, this year's batch of filmmakers have really done the topic of criminality proud. 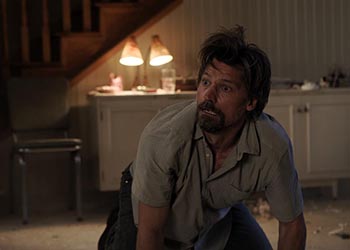 Evan Katz impressed just about everyone with his debut Cheap Thrills a few years back. His latest, Small Crimes has been highly anticipated and it is most certainly worth the wait. It stars Nikolaj Coster-Waldau (aka, Jaime Lannister) as an ex-cop with a troubled past who gets out of prison and tries to turn over a new leaf. In typical Katz-ian fashion (whatever can go wrong, will go wrong -- but in a funnier than expected way), that effort doesn't even last a full day and Coster-Waldau's character is right back in the thick of a crime plot with a ridiculous cast of knuckleheads. These jokers include fantastic turns led by Gary Cole, Macon Blair, and Pat Healey -- not to mention ace appearances by Robert Forster and Jacki Weaver. All in all it's a wonderfully fun crimer and a big step up from the contained mayhem of Cheap Thrills (which is saying a lot).

Not to be outdone by a young whipper-snapper like Katz, Edgar Wright has brought his own crime-action-comedy-romance to SXSW in the form of Baby Driver. It's Wright's first feature directorial outing since 2013's The World's End and it's not a stretch to call it his most polished and impressive movie to date. The story centers around a talented getaway driver named Baby (Ansel Elgort) who needs to finish a last few jobs for a crime boss (Kevin Spacey) before he can escape this dark lifestyle with the woman he loves (Lily James). That involves working with some pretty nefarious folks (Jamie Foxx, Jon Hamm, Eiza Gonzalez, Flea) and it definitely includes going on some amazing and hair-raising chase sequences. This is a less outright funny movie than we're used to from Wright but it's still definitely a comedy. But it's the incredibly choreographed, almost balletic action sequences that set this movie apart from most anything that has come before it. It's most definitely one not to be missed. 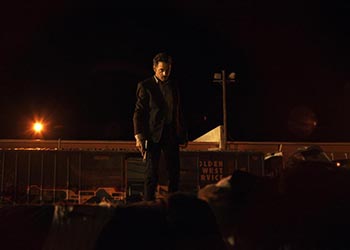 One actor who seems to have been born to play the grizzled detective is John Hawkes. He killed it in that role in Too Late and again shines as a hard-drinking private dick in Ian and Eshom Nelms's Small Town Crime. Another comedic crimer, this one finds Hawkes's character (not the same one, btw) doing his best to drink away his troubles and talk himself back onto the force after an accident leaves his partner dead and his badge stripped away. Those attempts are mostly feeble but when a dead hooker lands in his lap, it's just the excuse he needs to scratch that detective itch. Hawkes is of course wonderful in the part and the film is a lot of fun, not in the least because of great supporting roles for Clifton Collins Jr., Anthony Anderson, Robert Forster (yes him again), and Octavia Spencer.

Approaching criminality from a very different angle, Robert Mockler's Like Me is a stylized tale of a young girl's nihilistic, social-media fueled crime streak. Addison Timlin, who shined in last year's Little Sister, continues her hot streak as Kiya, a mysterious girl with very dark motives who somehow manages to stay completely likeable as she indiscriminately causes terror to a series of characters. The best of those characters is undoubtedly the horny motel purveyor and artist played wonderfully by Larry Fessenden who is brilliantly creepy yet still sympathetic. The movie is much trippier than it sounds and totally enjoyable if you are up for the ride. 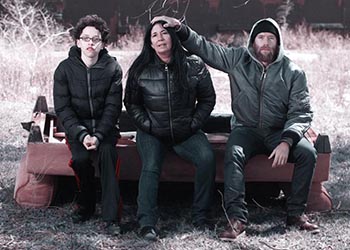 Flesh and Blood's link to the crime genre is perhaps a bit more tenuous. This latest movie from actor/director Mark Webber is unlike any of those mentioned above, but it's also unlike just about any other movie full stop. Ostensibly a drama, the film follows Webber's character after he is released from prison and returns to his mother and autistic brother in urban Philadelphia. Crime and addiction are a real part of life for all of the characters that revolve around Webber as he struggles to readjust. But what's most fascinating is that all of these characters from his mother and brother to his brother's junkie dad and his own estranged father are the real people they are playing. Webber explored this territory by casting his true toddler son in his wonderful film The End of Love and again this leads to a remarkable and touching film that begs to be experienced, even if it is absent the gun fights and car crashes in these other awesome SXSW crimers.