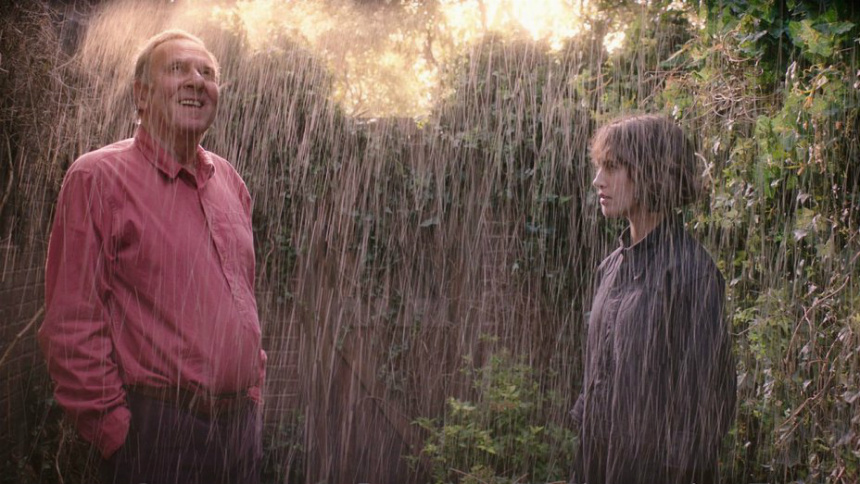 Every country/culture seems to have its particular version of the 'quirky' person or oddball, especially women, that are seen in film (America has long been obsessed with the so-called Manic Pixie Dream Girl). From the UK, such a woman usually appears as slightly conservative in dress, having odd taste in some activity or strange behaviour that leaves her mostly friendless, until an equally quirky boy comes along and appreciates her strange beauty.

This Beautiful Fantastic follows just such a quirky girl, Bella Brown (Jessica Brown Findlay), as she finds her voice through an odd friendship with her curmedgeon neighbour Alfie (Tom Wilkinson, playing yet another stereotype of the grumpy old British man). Of course, Bella is introduced via her odd beginning: abandoned as a child, found first by ducks and then an old man, Bella has grown into a woman with OCD, a fear of plants, and a desire to write and illustrate children's books, though she isn't quite sure how to get started.

She is told by her landlord that she must tend to her badly neglected garden or face eviction. Her curmudgeonly neighbour reluctantly offers to help her, after his sometime cook and housekeeper Vernon (Andrew Scott) threatens to quit if Alfie (an expert horticulturalist) doesn't. Bella gradually finds the beauty in her backyard, and Alfie softens to someone and the world around him in his final days.

This kind of film, relatively predictable in what its conclusion will be, becomes about the journey. And certainly it's not an unpredictable journey either, as both Bella and Alfie are established to grow and change (much like the garden they tend). The narrative mainly focuses on Bella, as she struggles to move away from her fears and find the sun, both literally in her backyard, and metaphorically with a young man, young inventor Billy (Jeremy Irvine), whom she meets at the library.

In the hands of another actress, Bella could have been too much of a caricature; luckily Brown Findlay is smart enough to play a more fully-formed character. Bella may have her quirks (always dressing as though for a funeral, keeping all her food in straight lines), but these are neither excessively unrealistic nor unrelatable. And throughout the film, she has a strong enough backbone to know when Alfie is crossing a line: she becomes aware of what she needs to change, but there is enough about her that doesn't need to.

Described as something of a fable, I lean towards disagreeing. Despite baby Bella's rescue by some kind ducks at the beginning of the story, the so-called 'magic' comes through working, and finding joy and inspiration in that work. Bella finds the metaphors she needs in his gardening, and in Billy's mechanical animal inventions (also the result of labour). This gives the story a touch of sweetness without becoming too sick with it. The real world becomes a conduit through which Bella finds her creativity.

Alfie's transformation is much less dramatic, and much more in keeping with the stereotype of his character. Still, it is Wilkinson in the role, so his Alfie might be a curmudgeon, but like Findlay Brown, he never lapses into caricature. And Scott's Vernon is smart and sad without being pathetic, a fully-fleshed character as oppose to one that just fills in as a narrative device.

At times, the camera work is perhaps a bit too soft-focus; Aboud is aiming for whimsy, but the steely-eyed strength of its main characters are the story's real secret weapon. With lovely touches of production designer Alexandra Walker, and using the garden of renowned UK horticulturalist Peter Beardsley, This Beautiful Fantastic is not perhaps an revelation in storytelling or execution, but with fine actors and a sweet and smart story, it finds its charm in unexpected ways.

This Beautiful Fantastic opens in select theatres in the US on March 10.