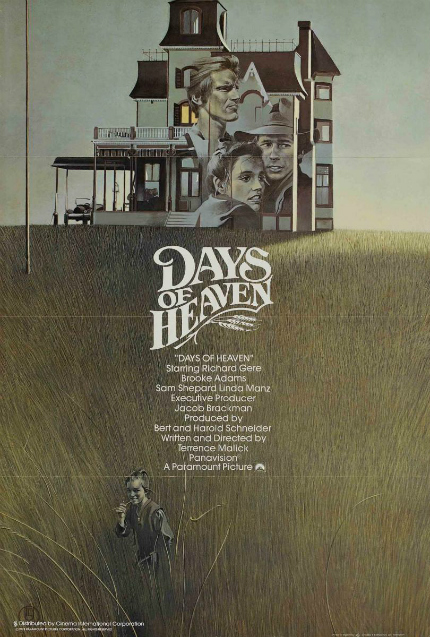 Terrence Malick's latest film, Song to Song, opened quietly in the U.S. recently, and it's very much an example of populist experimental cinema. As I sat in a theater yesterday afternoon, struggling to stay awake and pay attention to the often gorgeous imagery, I kept wondering why I was attracted to Malick's work in the first place.

His directorial debut, Badlands (1973), is a flat-out classic and I will brook no dissent. (Joking, of course; that's what the comments section is for!) His sophomore effort, Days of Heaven (1978), was not so universally accepted, as I recall, though I didn't see it for myself until 1979 or 1980, on a double-bill of both his films up to that point.

I'd seen Badlands on television and loved it -- though of course even a beat-up 35mm print looked better -- but I was absolutely gobsmacked by Days of Heaven. That was a phenomenal experience; the colors, even on a slightly faded 35mm print, appeared to be splendid, and I was completely caught up in the rush of dramatic emotion that poured from the screen, much of it conveyed by the visual splendor of Malick's cinematic language.

It's easy enough to pick on the apparently rudimentary dramatic talent exuded by Richard Gere, Brooke Adams, Sam Shepard and Linda Manz, but in hindsight they are each perfect for their roles. Whether by instinct or direction, they underplayed their roles beautifully, suggesting rather than declaring their character's intentions for the most part.

Sometimes, Malick's script betrays the characters by making explicit certain points that have already been made implicitly. Perhaps that's why he tossed the script two weeks into production, according to Peter Biskind's book Easy Riders, Raging Bulls, which claims that Malick was having trouble "getting decent performances." 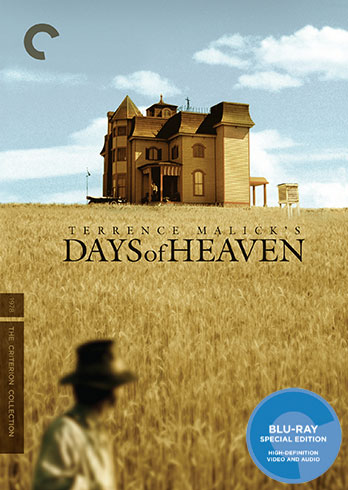 After production wrapped in the fall of 1976, the editing process took nearly the entire two years until the movie was released in October 1978. That process dragged because Malick reportedly "couldn't find the movie."

When I read that again, I thought about Song to Song, which plays as though Malick 'couldn't find the movie' inside all the footage he shot. But that's not true for Days of Heaven. Whether through the voice-over narration by young Linda Manz, which comes and goes, or through the assistance of unnamed others, or via sparks of scattered inspiration, a narrative emerges that is buttressed by shots of the endless wheat fields and the lonely house that commands the farm.

I've seen the movie so often that it feels like a beloved first cousin, but this was my first viewing of the Criterion Blu-ray, which looks spectacular and helped to make my repeat viewing a magnetic experience. With Song to Song still in my mind, the deliberate yet always forward-moving pace and deliberate pausing of Days of Heaven, allowing the faces of the characters to sink in, became like music in my ears.

It's a meditative piece; when the camera moves, it tracks gently and with purpose in mind. And, hours later, I'm still seeing the faces and body language of Gere -- his looping gait -- and Adams and Shepard and Manz, the foursome who push and pull against each other.

Days of Heaven was nominated for four Academy Awards and won one for Best Cinematography (Nestor Almendros, with photography also credited to Haskell Wexler). Malick retired from filmmaking for the next 20 years, reportedly teaching philosophy in France until 1994, before returning with The Thin Red Line in 1998. I enjoyed that one and also The New World, but it was The Tree of Life that really blew me off my orbit.

As often as I've seen Badlands, I'm even more drawn to Days of Heaven. It still hits me right between the eyes, even when the chords it strums sound familiar.

70s Rewind allows the writer to reflect upon his favorite film decade.

Do you feel this content is inappropriate or infringes upon your rights? Click here to report it, or see our DMCA policy.
Brooke AdamsLinda ManzRichard GereSam ShepardTerrence Malick

More about Days of Heaven