Review: WAR ON EVERYONE, A Hilarious Affront to All That Is Decent 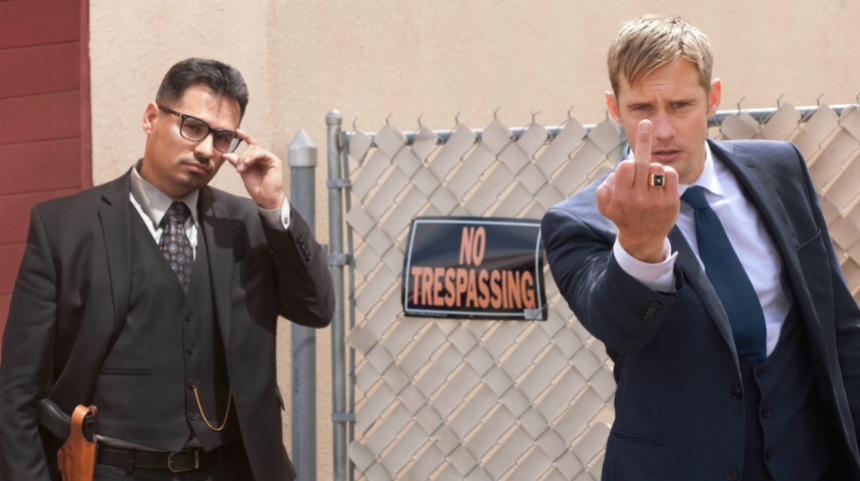 Within its first 10 minutes, War on Everyone smashes at least two dozen stereotypes familiar to anyone who has ever watched a cop movie made by a Hollywood studio, doing so in a rollicking and hilarious fashion.

It's a barrage of silly sight gags and punchy one-liners that is simultaneously silly and smart, a series of over the top explosions that blow up, one after the other, to ever greater effect. When things finally slow down, it's only for a moment to allow the audience to catch its collective breath and ask, perhaps, where can this crazy thing possibly go from here?

Writer and director John Michael McDonagh, who previously made the tight, intense drama Calvary, here returns to the rough, black comic territory of his debut, The Guard, though it's safe to say that War on Everyone is much broader, and intentionally so. The opening sequence, picking up in media res, is immediately reminiscent of Lethal Weapon 2, featuring two cops in the midst of an automotive chase.

As prototypical buddy cops in Albuquerque, New Mexico, Michael Peña and Alexander Skarsgård are incredibly well-matched detectives, sitting at one point in the police station, wondering why everyone else bothers to work. Their boss, played by Paul Reiser, is exasperated and appears genuinely confounded by how stupid they pretend to be. 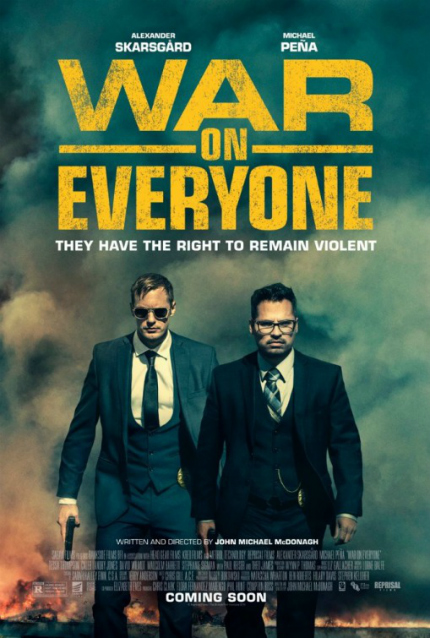 At the risk of explaining a joke (badly), that's exactly the point. Peña and Skarsgård are personifications of the typical law-breaking law-enforcers who peopled 1980s action movies and continue to do so down to this day.

So, obviously, War on Everyone pivots on whether the film's humor strikes a responsive chord, and that opening sequence is a good litmus test -- if it doesn't make one laugh, neither will the rest of the movie. For those who remain on board, McDonagh sketches out the characters of Bob Bolaño (Peña) and Terry Monroe (Skarsgård) and the actors take it from there, investing them with grace notes of humanity that reinforce the humor.

Bob has an understanding wife named Dolores (Stephanie Sigman) and two rambunctious boys, while Terry lives alone in a starkly furnished home that he comes to share with the survivor of a crime scene (Tessa Thompson, continuing to stand out after Selma and Creed). The women are limited to stereotypical supporting roles, with their greatest strengths being that they accept the men as loving and devoted clods.

Naturally, Bob and Terry are in pursuit of nasty villains, led unexpectedly by Theo James, who has established himself as a teen heartthrob in the Divergent series of movies. As the leader of a criminal syndicate, he distinguishes himself by imitating Sean Connery as 007. Caleb Landry Jones makes for a splendidly irritating, lower-rung criminal cohort. Malcolm Barrett has a few good scenes as Reggie, an informant, who basically functions as a means to get Bob and Terry from one location to another.

Ultimately, War on Everyone is a laugh machine that doesn't always shoot straight and true and is bound to offend nearly everyone. (For one thing, even the most politically incorrect people on the planet would find Paul Reiser's description of his children to be offensive.) It falls short of McDonagh's previous films, which were strong on stinging characterizations, and is incredibly broad and obvious.

Really, though, isn't that the point? If you're going to make fun of Hollywood cop comedies, you pretty much have to be broad and obvious. War on Everyone is glorious, riotous fun, and Peña and Skarsgård are utterly charming.

Review originally published during SXSW in March 2016. The film will open in select U.S. theaters on Friday, February 3 and will also be available to watch via various Video On Demand platforms..

Do you feel this content is inappropriate or infringes upon your rights? Click here to report it, or see our DMCA policy.
Alexander SkarsgardJohn Michael McDonaghMichael PenaPaul ReiserTessa ThompsonTheo JamesUK

More about War on Everyone