Review: THE TAKE, Terrorism As Background for a Buddy Action Movie

Idris Elba and Richard Madden star in THE TAKE, directed by James Watkins, an action movie that tries very hard. 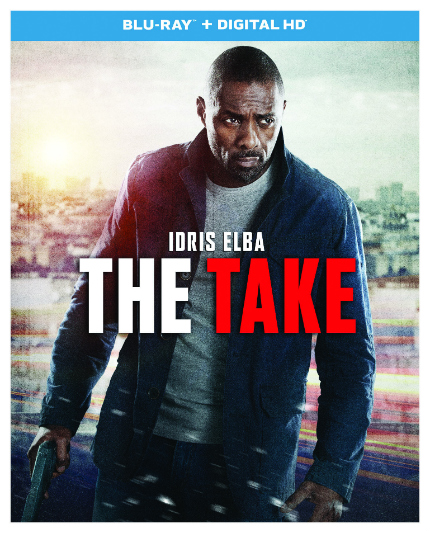 British filmmaker James Watkins previously helmed Eden Lake and The Woman in Black, horror thrillers that may not have been completely successful but were certainly above average accomplishments. So the idea of him directing a straight action flick sounded intriguing.

Originally known as Bastille Day and now titled The Take, the movie stars Idris Elba and Richard Madden as a mismatched pair of rogue operatives who are thrown together to solve a pressing anti-terrorist mission. It feels like a modern British take on the 80s American buddy-cop action movie, especially in its usage of terrorist activity as a cover for a big robbery.

Nowadays, though, that sort of thing requires a far different touch. Modern audiences are far too aware of the devastating consequences of terrorist activity to dismiss them entirely, unless the film establishes its setting as a fantasy of some sort, making it easier to digest and accept outrageous twists and yawning plot holes along with the idea that we shouldn't be thinking about the real world as long as the movie is running.

Indeed, the opening sequence of The Take features an attractive woman walking naked through a public gathering, distracting everyone and allowing expert pickpocket Michael Mason (Madden) to practice his criminal craft at will. After a sighting of police officers, however, Michael separates himself from his last-minute partner to make his escape.

Yet he's unable to stop for the night, instead preying upon an upset woman in a crowded plaza. Finding nothing of value inside, he dumps the woman's bag ... only to have it explode moments later, killing four innocent bystanders.

The light mood has vanished and The Take has become a deadly thriller. The CIA believes that the woman, named Zoe (Charlotte Le Bon), is an accomplice of a terrorist cell operating in Paris, and so Karen (Kelly Reilly), the agent in charge, sends recently-arrived Sean Briar (Elba) to pick up Michael, identified as the suspect bomber.

After Sean picks up Michael, there's a suggestion that they have a comic interchange at an otherwise empty CIA stash location with a secret holding cell. Perhaps that was the intention, but the interplay between the two characters consists of Sean making a lighthearted comment and Sean staring at him, stone-faced.

Before long, however, Michael manages to escape and sets off across Paris rooftops with breathless abandon, pursued by Sean with great efficiency. It's not much of a contest, to be frank, and the two are soon teamed up against corrupt, criminally-minded people who are passing themselves off as dedicated defenders of the law.

As briskly as the action moves, however, the underlying mood remains stubbornly dramatic, suggesting that The Take should be viewed in a very serious light. That was, perhaps, not the intention, but it's the way events play out, and it's also reflected in how the characters react to events.

Action-movie fans are accustomed to outrageous twists and unbelievable turns, as long as the action sequences are satisfying. Here again, The Take feels like a letdown because the action is so familiar; there is little here that is fresh or original.

The Take has enough professional sheen from Watkins and honest oomph from Elba and Madden to warrant a casual viewing. More than that, though, would be expecting too much.

The movie is available now on Digital HD and will be available on Blu-ray and DVD tomorrow, February 7, from Universal Pictures Home Entertainment. I watched the Blu-ray, which presents the picture in very fine fashion. The only extra is a brief "making of" feature that runs about three minutes.

Do you feel this content is inappropriate or infringes upon your rights? Click here to report it, or see our DMCA policy.
Bastille DayCharlotte Le BonIdris ElbaJames WatkinsRichard MaddenThe Take