Review: JOHN WICK: CHAPTER 2, There Will Be Blood, Oh, So Much Blood 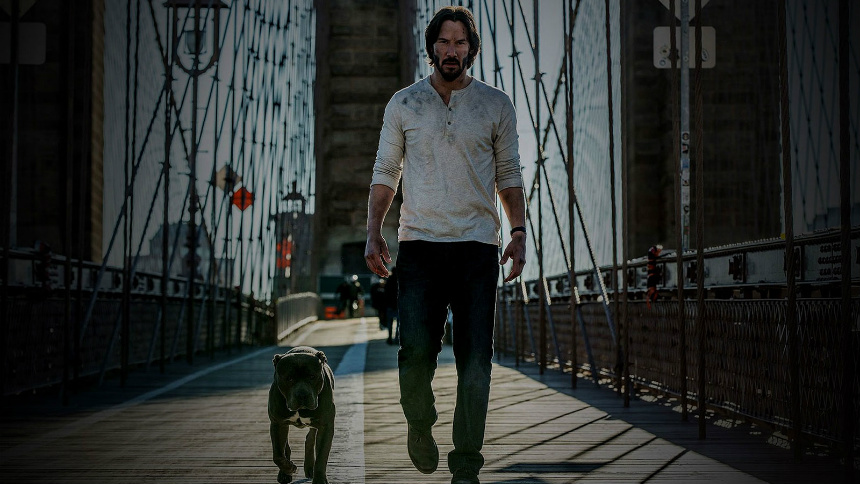 All he wants to do is enjoy his retirement. With his new dog. But first, he needs his car.

So begins John Wick: Chapter 2, continuing the tearjerking saga of the titular character, an assassin who broke free of his murderous responsibilities, only to lose his beloved bride and then his old dog and his beloved automobile. It was all too much for him, as those who saw John Wick (2014) can testify, and he exploded into a frenzy of vengeance.

The original was a marvel of construction and execution, which makes topping it a daunting task. Instead of devising something entirely new, therefore, the decision was made to ... make the same movie all over again!

To be fair, a better title for the sequel might have been The Continuing Adventures of John Wick, because this film picks up soon after the original, time-wise, and then comes up with strong motivation for John to stay out of retirement and keep on killing. He is an honorable man, after all, and the world in which he lives is kept somewhat in check by the rules of that universe.

Like a Supreme Court justice, John received a lifetime appointment as an assassin. To escape that life, he made a deal with Italian mob boss Santino D'Antonio (Riccardo Scamarcio) and, not 10 seconds after John has returned home and once again buried his weaponry upon a layer of concrete, Santino shows up at his door to collect on his blood-stamped marker.

It's a blood oath, recognized by the "Upper Table," the High Holy of assassins worldwide, and John is bound to honor it or else face death, though he initially resists. Once he accepts his fate, he is outfitted head to foot in necessary gear -- in an amusing sequence that resembles the fantasy underworld version of James Bond learning about new toys from Q -- before heading to Rome to commit a supposedly impossible job: killing Santino's sister.

She sits on the High Table, a powerful position inherited from their father, but one that Santino believes should rightfully be his. Once John completes that task, Santino intends to conquer New York. But first, he puts out an open, $7 million contract on John for killing his sister. 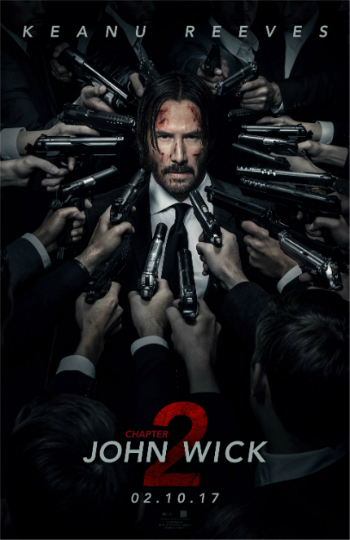 Of course, this is all ridiculously formal, as if all the hired killers in the world respected and obeyed a governing body. Yet it also imagines a scenario that gives all the murderous madness in the movie a formal structure, instead of the anarchy that exists in real life.

Really, it's almost reassuring to watch the carefully choreographed fist fights, knife fights, and gun fights break out against backdrops that are often fully populated. As the body count rises quickly, we refuse to believe that it could possibly be real because we know it's a movie.

The action is (again) so over the top that it quickly gains escape velocity from reality. The ludicrous plot holes and superhuman tolerance for bodily violence are more about the rhythms of the punches and gun blasts and knife thrusts and less about logic and the natural laws of the universe in which everyone else lives.

In John Wick: Chapter 2, there will be blood, oh, so much blood, gushing and spraying and collecting in pools on the ground, as bodies fall, one after the other and the other, an accumulation of corpses that should offend, except that none of it is real and all of it is outrageously entertaining for devoted fans of action movies.

Once again, Chad Stahelski directed. The cast includes the wonderful Ian McShane as the owner of assassin hotel/refuge the Continental, as well as Lance Reddick and John Leguizamo, also reprising their roles. New players include the aforementioned Scarmarcio, Ruby Rose and Common, all on the villainous side, though lacking anything to define their characters.

Despite what I stated above, John Wick: Chapter 2 is not exactly the same movie as the original, but it certainly works very hard, and very stylishly, and very effectively, to recapture its cold, cold heart. It adds an existential question that no one was asking after the original: what is John Wick's true motivation for killing? That powers the movie straight through to the final shot.

The films open wide in theaters throughout North America on Friday, February 10. Stay off the streets if you want to stay alive.

Do you feel this content is inappropriate or infringes upon your rights? Click here to report it, or see our DMCA policy.
Chad StahelskiIan McShaneKeanu ReevesLaurence FishburneRiccardo ScarmarcioRuby Rose